'Chhotus' from Bhagalpur barter their boyhood in Chennai, end up in misery 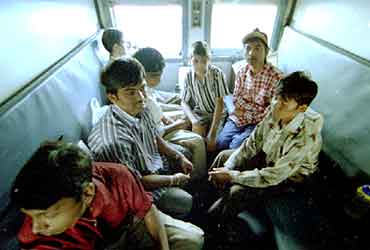 outlookindia.com
-0001-11-30T00:00:00+0553
On February 28, the Chennai-Howrah Coromandel Express had on board at least 60 children aged between 10 and 15. Coaches S4 and S7 in particular had bulk bookings for Bhagalpur in Bihar. Virtually everyone bound for Bhagalpur that day is or was a Chhotu, a generic name for young Bihari domestics.

They worked in various Chennai homes and were going to their homes in Bhagalpur district for Holi. After a five-hour wait at Howrah, they would catch the Howrah-Jamalpur Express for Bhagalpur—some 50 hours of travel in all.

Ajay Kumar, 12, is one of these children. He isn't sure he wants to go back home. Nor is he clear about staying on in Chennai. On the night of February 15, he was thrown out of the upper-middle-class home he worked in for reasons he doesn't understand. Ajay spent a hungry night in a watchman's cabin, the next morning a few residents of the flat took him to Nesakkaram, a home for abandoned and neglected children in Chennai.

Migrant domestic children form the cheapest, most compliant labour available. It's something relatively well-off Indians have been realising. Many older Indian social networks are defined strongly by community, and this is how, for instance, the North Indian upper middle class in Chennai employs so many Chhotus—at least 100 from Bhagalpur district alone.

Virgil D'Sami of the Campaign Against Child Labour questions the term "employ". "The child is trapped in a hostile, alien atmosphere. Even his salary is not remitted monthly; it is given in bulk to an adult agent at the end of the work year. The child is in bondage; this is slave labour," he says.

Ajay was abused physically and verbally almost every day at work. Beginning his day at 5 am, he did all the household work: chopping vegetables, cooking, washing, cleaning the house, buying provisions and keeping company to the three children of the household, who too were abusive towards him. After tea for breakfast, he was served leftovers for lunch and dinner.

It's a dirty little secret in thousands of middle-class Indian homes—the treatment of children who are domestics. They get away with abuse because India has no law that makes employing child labour a punishable offence. The Child Labour (Regulation and Prohibition) Act, 1986, only says hazardous processes and industries like match factories, bidi-making units or cinder picking should be banned for children below 14. Article 24 prohibits the employment of children in factories. Even NGO-led campaigns against child labour have focused almost exclusively on the worst forms of child labour in the manufacturing sector.

Child rights activists want India to ratify the ilo convention that prohibits children from being employed for household work. "Compared to hazardous industries, domestic labour may seem benign. But this is a middle-class myth. The government should recognise domestic work as the worst form of child labour," argues D'Sami. In fact, the very people who lead the campaign against hazardous forms of child labour may employ children at home. "A former State Human Rights Commission member had a child domestic and even justified it," says D'Sami.

The moral argument of the middle class is that its homes become a refuge for a destitute child, who then has a quality of life he would not enjoy at home. Yet child labour, especially migrant child labour, is pervasive because children are docile, can be moulded to their employers' needs, can be paid less, are less troublesome, and are unable to demand their rights.

Ajay Kumar, like other children from Jagannathpur, is from a very poor family. He only studied till Class 1. "My father owns no land. He's an agricultural labourer. Several times, my younger brother, sister and I've gone to bed hungry." Work is seasonal for Ajay's father, Gulesar Thathi. For 20 days a month for a maximum of five months, he can make Rs 30 daily. On his monthly salary of Rs 500, Ajay makes twice as much as his father does. Each time Outlook spoke to Gulesar on the phone, he was poorer by Rs 5, the amount the std booth owner collects for calls received. The only thing that shines in Jagannathpur is the sun—yet the sole solar-powered public phone there functions erratically and the booth operator takes half an hour to fetch Gulesar.

Gulesar, who could neither feed nor educate his eldest child, decided to send him to Chennai along with Ananth, Chhotu and some 15 other Jagannathpur children already working in Chennai households. Ananth and Chhotu, both aged 25 now, came to Chennai as domestics 15 years ago. Each year, on their annual Holi trip home, they bring back a few more boys, earning a commission in the process.

The kingpin who controls this network is Narayan Singh, who runs a bhelpuri-chaat shop in Chennai's biggest mall, Spencer Plaza. He says the boys in this case are from a weaving community, which is strictly vegetarian. This suits Baniya or Marwari Jain employers. "Though the bulk of child labour is Dalit, domestics tend to come from higher castes since they work inside homes and often cook the food," explains a child rights activist.

It is not impossible to punish employers like Ajay's. Says Vidya Reddy, a child rights activist with Chennai NGO Indian Council for Child Welfare, "Since July 2002 I have been involved with the rescue of six child domestics. Since the Child Labour Act does not consider domestic work hazardous, we book cases under IPC 320, 323, 324 (causing grievous hurt), 342 (wrongful confinement) and 374 (unlawful compulsory labour). In five cases, we managed to get compensation of Rs 25,000 to Rs 50,000."

But clearly the government needs to do more than widen the scope of the law if domestic child labour is to be controlled. As Madras High Court lawyer K. Chandru says, "Our Constitutional amendment under Article 21A, effected in 2002, gives every child the fundamental right to free, compulsory education up to the age of 14." This means two things. A child should be at school, not chopping someone else's vegetables. And every child who can't make it to school is a sitting duck for would-be employers and their Narayan Singh.

But how do you explain all that to a confused and frightened boy on a railway platform 2,000 kilometres from home, whose life's ambition is, "To eat rice and dal every day"?

The Secret Road To Riches