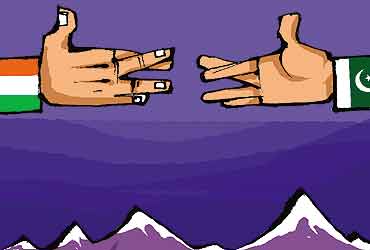 outlookindia.com
-0001-11-30T00:00:00+0553
In the interview to Karan Thapar for the cnn-ibn channel, President Musharraf said relations between Pakistan and India have never been better. This is probably true. The visa regime between the two countries is more relaxed, trade barriers are beginning to come down and there has never been such broad interaction between the intelligentsia in the two countries. It's as if Pakistan has decided to turn its back on the past and look resolutely towards the future. President Musharraf deserves the credit for bringing about much of this change. But so far as the resolution of disputes is concerned, relations between the two countries have reached their lowest point since the Islamabad SAARC summit of January 2004. It would not be an exaggeration to say that the entire peace process is now hanging by a thread.

There are many indications that patience is wearing thin on both sides. A spurt in terrorist activities in India, culminating in the dastardly attack on scientists at the Indian Institute of Science in Bangalore, has made India harden its stand and insist that further movement will need to be prefaced by concrete and visible action by Pakistan to stop the Lashkar-e-Toiba and other tanzeems from operating in Kashmir and the rest of India. Pakistan has given its standard reply—it has completely stopped all cross-border infiltration and that what is happening in Kashmir and the rest of India is a domestic response to human rights violations by Indian troops.

India then showed its growing impatience by expressing concern at the use of bombs and rockets by Pakistani forces in Balochistan. Pakistan first responded by sternly demanding India not meddle in its internal affairs. In his interview, President Musharraf went a step further and bluntly accused India of financing and giving material support to the insurgency in Balochistan.

When Musharraf, in the same interview, offered to help rein in militancy in Kashmir completely if India demilitarised three towns—Srinagar, Baramulla and Kupwara—the Indian external affairs spokesman dismissed this loftily by stating that any demilitarisation or redeployment of security forces within the territory of India has to be a sovereign decision of the government of India and cannot be dictated by any foreign government. While the spokesman did qualify and soften this statement, the basic message that India would not respond to overtures made through the media was loud and clear.

The spokesman also objected to Musharraf's use of the term militancy. The problem, he said, was cross-border terrorism, not militancy within Kashmir. This summary rejection of Musharraf's offer is difficult to understand. The Indian government must realise that Musharraf has to use the term militancy in public statements for precisely the same reason that New Delhi has to talk about cross-border terrorism. It needed to look at the substance of his offer, not its wording. This was nothing less than a promise to curb Pakistan-inspired violence in Kashmir in exchange for a reduction of Indian troops in the Valley. Since this has to be the essential first step in any resolution of the Kashmir issue, the least that New Delhi should have done was not to reject it out of hand.

The real reason for New Delhi's irritation with Islamabad is that even while Musharraf airs these grand proposals in public, in the backchannel talks that are simultaneously going on, he is not responding to various Indian suggestions on how to establish Kashmiri autonomy within the three-point framework established in New Delhi last April. This has given sceptics in the Indian security services the opportunity to raise the issue of trust all over again. Musharraf's real purpose, they claim, is to convince the world that it is India and not Pakistan that is dragging its feet on the road to peace. This will increase international pressure on New Delhi to soften its stand on substantive issues.

The distrust is, of course, mutual. Much of the Pakistani establishment is convinced that the April agreement was New Delhi's clever way of getting Musharraf to accept a watered down Line of Control as the international border. Thus, Indian proposals that fall within it are automatically suspect. This suspicion was endorsed by the Hurriyat delegation that went to Pakistan two weeks ago, when its leader Mirwaiz Umer Farooq said at a press conference that the Hurriyat would not accept any solution within the framework of the Indian Constitution.

The plain truth is that the first step towards resolving the Kashmir dispute must be a simultaneous demilitarisation of parts of the Valley in exchange for unstinting Pakistani cooperation in curbing terrorism, no matter what its source. Only when both sides are convinced of each other's sincerity can the next step be taken. These will include fresh elections in both parts of Kashmir and a redefinition of their relationship with both India and Pakistan. Kashmiri autonomy can then be shored up by getting both parts to elect a joint consultative council entrusted with harmonising legislation and policy in the two parts. Each step of this process requires painstaking and sincere backchannel negotiation. At some stage, it will also be necessary to consult representative Kashmiri political organisations. All that will take time and will test the nerves of people in both countries. Trading accusations and striking disdainful postures will not help.