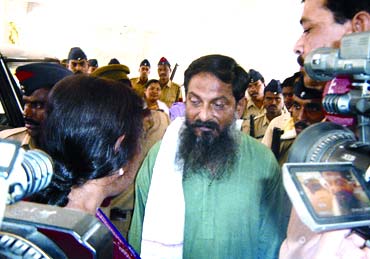 It couldn't have been more ironic. The Supreme Court chose, even though by accident, the date designated as World Human Rights Day, December 10, to turn down the bail plea of noted rights campaigner Dr Binayak Sen. In many ways, Dr Sen's role as an activist and his services to marginalised communities proved to be his undoing. At the end of the day, after hearing pleas from Dr Sen's counsel, noted constitutional expert Rajiv Dhawan, and the government of Chhattisgarh, the apex court did not find any merit in granting him bail. The doctor, who was arrested on May 14, 2007, and charged under the Unlawful Activities Act and the draconian Chhattisgarh Public Safety Act, will continue to languish in custody.

What is the basis of the Chhattisgarh police's case against Dr Sen? The chargesheet against him says he is a Naxalite sympathiser. This conclusion was reached after his name came up when the police recovered three letters from suspected Maoist Piyush Guha, arrested at the Raipur railway station. These were written to Guha by another alleged Maoist, Narayan Sanyal, presently lodged in Raipur Jail. The police claim Guha, under custodial interrogation, confessed that Dr Sen acted as courier.

Dr Sen did meet Sanyal in jail on several occasions. But each time it was with due permission from the jail superintendent and a body search before and after his meetings. And even if we were to accept that Dr Sen smuggled the letters out, what exactly was "incriminating" in them? One letter deals with farmer-related issues, the letter writer's health and so on. In another note, Sanyal is discussing issues relating to his case and the approach his lawyer has taken in court. In yet another, he complains of there being "no magazines" to read in jail and terrible conditions in prison. Activist-lawyers like Prashant Bhushan see the framing of Dr Sen on such flimsy evidence as "a message that clearly states that people must shut their eyes to violations of human rights of the marginalised or risk arrest".

Why and when did Dr Sen become the target of the Chhattisgarh government and police? Many say his sharp criticism of Salwa Judum, the controversial government-backed 'movement' against Naxals, his raising of issues of ill-treatment of suspects picked up by the police, of the pathetic conditions in jail and his criticism of the state government vis-a-vis human rights irked senior police officials. "The intelligence branch of the state police was already upset with Dr Sen raising these issues and they also found some support from their central counterparts in the Intelligence Bureau," a senior government official told Outlook.

In framing its case against Dr Sen, the Chhattisgarh police has relied heavily on the "confessional" statements made under interrogation by Guha. This, despite it being repeatedly pointed out in various courts that custodial "confessions" are inadmissible as evidence in court. Guha has also stated before a magistrate that he was tortured for several days under illegal detention and made to sign blank papers.

However, there is more that investigators hold up as "incriminating evidence" pointing to Dr Sen's "deep" Naxalite connections. Among them:

The unkindest cut comes in the second paragraph of the preliminary objections filed by the state government to the bail plea. It states that Dr Sen "is a namesake doctor." Reason: during the search of his house the police did not find any "medical books, medicines, drugs etc". It is another matter that Dr Sen has a medical degree from the reputed Christian Medical College, Vellore. He is also one of the founders of the Shaheed Hospital near Bilaspur and was a member of the Jawaharlal Nehru University's faculty on community health. In 2004, he received the Paul Harrison award for his work in public health in rural areas.

Despite these gaping holes in their submissions, the Chhattisgarh government has managed to keep Dr Sen in jail indefinitely, raising serious civil liberty issues. "His arrest and efforts to keep him in jail are a major symbol of a contradiction today," says Dr Imrana Qadeer, professor of community health and social medicine at JNU, Delhi. "The health minister (Dr Anbumani Ramadoss) wants students to go to rural areas but who will go to villages to serve the poor and the marginalised after Dr Sen's case?" she asks.

Dr Sen's counsel Dhawan says that he is shocked at how the "government counsel misled the court" and described the denial of bail as a "serious attack on civil libertarians and human rights". For many like Prashant Bhushan, the arrest of Dr Sen and his continuing incarceration is the symbol of a "creeping fascism within the establishment".

People may be shocked by the flimsy grounds Dr Sen has been arrested under, and justifiably feel that his legacy in taking healthcare to the poorest of the poor may be in great peril, but the state government thinks human rights and public health are now the gravest threats to people's safety.

'We Must Appeal To The SC'