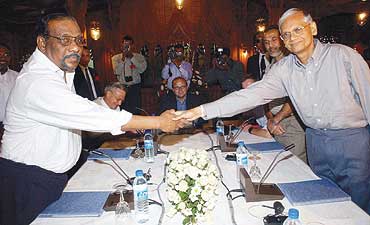 As New Delhi mulled over the request, from both Norway and Sri Lanka, to attend the meeting, Sri Lanka sent two emissaries—Milinda Moragoda, its minister for economic reforms, and Rauf Hakeem, of the Sri Lanka Muslim Congress, to canvass Indian support for the donor process. According to a Lankan diplomat, Moragoda, who met foreign minister Yashwant Sinha, finance minister Jaswant Singh as well as national security advisor Brajesh Mishra, "emphasised to all three the need for the Indian government's involvement in the donor process, that India has a stake, that India's absence would send wrong signals all over."

At the crux of the debate is India's stance on the LTTE. If India had attended the meet, diplomats said last week before the decision was taken, it would virtually "legitimise the LTTE," an organisation that has remained proscribed since it was accused of assassinating former PM Rajiv Gandhi. An Indian representative in Oslo, argue diplomats, would have raised questions of political and legal propriety, and also raised the hackles of the Congress party.