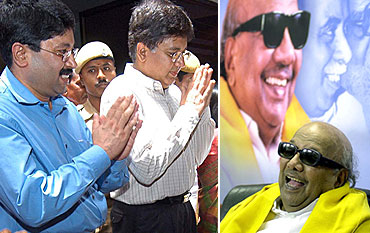 outlookindia.com
-0001-11-30T00:00:00+0553
The unthinkable has happened in Tamil Nadu politics. AIADMK chief Jayalalitha got extensive coverage last fortnight in Dinakaran, the Tamil daily run by Kalanidhi Maran, the grand-nephew of DMK patriarch and the chief minister of Tamil Nadu, M. Karunanidhi. For long, the paper has had an unstated policy of not giving space to AIADMK leaders. But when Jayalalitha criticised the "terror" tactics of M.K. Azhagiri, the DMK chief's eldest son, in the ongoing cable war between him and the Maran brothers in Madurai, not only did Dinakaran carry the statement in full, it even published her photograph.

This is a far cry from 2001 when Jayalalitha as CM had Karunanidhi arrested in a riveting midnight drama in the 'flyover scam'—an action many had criticised as a clear case of political vendetta. The late Murasoli Maran, father of Dayanidhi and Kalanidhi, too had been picked up and later released. The Maran-owned Sun TV had then not tired of repeatedly flashing the image of Karunanidhi being dragged away. Cut to the present, and the same network has gone from blacking out Jayalalitha's statement-a-day criticising Karunanidhi and his governance to using them and, often, even giving them prominence.

Needless to say, the DMK is not amused by Karunanidhi's grand-nephews sidling up to the DMK arch-rival. "We can see that the daily has an ulterior motive and has ignored the party's repeated advice," read a statement in the DMK mouthpiece Murasoli. It pointed out that only Dinakaran had gone "overboard" with Jayalalitha's statement, other newspapers had all ignored it. The party directed its members not to give any news to the daily or issue advertisements. This effectively put a closure on any indulgence the DMK's might have shown towards Dinakaran and Sun TV.

"We wanted to have somebody on our side," says a Dinakaran insider, explaining why the Marans are flirting with Amma. The thaw had set in earlier perhaps, exemplified by Dinakaran carrying over 20 pages of advertisements on Jayalalitha's 60th birthday on February 24. Then the Maran camp had dismissed it, saying "it was about business and not politics". But when the paper lent its pages to Jayalalitha to unleash an attack on Azhagiri, who recently launched his Royal Cable Vision in a clear attempt to sideline the Maran-owned Sumangali Cable Vision, politics became an easy tool in the cause of business. 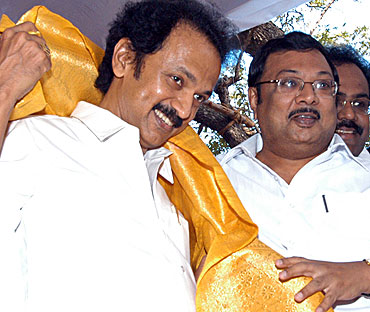 It surely has not helped the Marans return to the DMK fold. They had earlier pinned their hopes on Karunanidhi's son M.K. Stalin getting them back in the family circle. According to the Maran camp, while Stalin views the Marans benignly as allies in a future scenario where he might need their media clout to back his political career, Azhagiri treats them as traitors "after Dinakaran gave him a mere two per cent in the popularity stakes as opposed to Stalin's 70 per cent". Azhagiri's anger had, in fact, triggered an attack on Dinakaran's office in Madurai last May in which three employees were killed.

The Marans have been in the doghouse ever since. Dayanidhi was asked to quit as Union minister, although technically he is still a DMK MP. But the family business has suffered. The Marans have, therefore, been desperate to get back in the good books of their grand-uncle.

In fact, the Marans did get what was seen as a favourable reception on two public occasions when they met Karunanidhi. One was during Stalin's birthday in March, and the other was in May after the DMK chief was discharged from a Chennai hospital having been treated for a neck and back pain. But when on June 3, Dayanidhi and Kalanidhi headed to the Karunanidhi residence to greet their grand-uncle on his 85th birthday, they were surprised to be humiliated. After making them wait for an hour, Karunanidhi refused to meet them. Azhagiri happily owned up his role in the humiliation, ringing up media houses to crow, "Had they met Kalaignar, wouldn't they have flashed the news on their TV channel (Sun TV) as big news?" Never one to bother with niceties, Azhagiri added that the Marans' re-entry would only "weaken, not strengthen the party".

Given this background, the overture to Jayalalitha could well be an indication by the Marans that they have reached the endgame vis-a-vis the DMK and that their business will survive and grow only with new political alignments? "After all," say some within Dinakaran, "Jayalalitha is a former CM. In any case, we carried her statement as it is." Others, however, are candid enough to admit they have been pushed. "And we don't care because our business is hurt. Aligning with somebody who is seen as an adversary sends a signal to our readers that we won't let anyone harm our business."

Despite the DMK diktat, some in the Maran camp haven't given up hope of a truce. They believe Karunanidhi and those close to him know that, unlike their father Murasoli Maran, Kalanidhi and Dayanidhi "were brought up in affluence and hate politics. Kalaignar (Karunanidhi) knows that the Marans only want their business to grow, but is caught between his feuding sons". But this may be wishful thinking. With Azhagiri making his animosity towards his cousins clear, the Marans may find rapprochement not particularly easy. The one consolation the Marans might have is that the DMK-launched Kalaignar TV is nowhere near Sun TV in terms of viewership.

At Dinakaran itself, there is a sense of relief. The new situation has made journalists "breathe easy because they don't have to overanalyse and get to the root of everything and how it will affect the DMK leadership before publishing anything". Journalists are welcoming the winds of change. Among them is Cho Ramaswamy, political commentator and editor of Thuglaq. "Before, Dinakaran and Sun TV were the mouthpiece of the DMK," he said. "Now, they have become independent and it's a welcome change." The overall perception is that the Marans' media empire has become "well and truly neutral". But has it? Or will it now just tilt the Jayalalitha way?