A Cross For Jogi 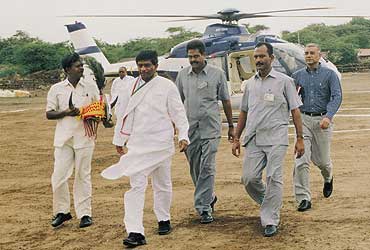 The VHP will work for the BJP and could rise divisive issues here, but against Christians

Terrorism and communal polarisation have a different meaning in Chhattisgarh. Terrorism here is Naxalite violence imported through Andhra's PWG belt and Jharkhand's MCC. And communal tension here is between Christian and Hindus. Jashpur is at the centre of it and has a visible Christian presence in the form of churches and missionary outfits. It's also here that the VHP's Vanvasi Kalyan Ashram has located its national headquarters. BJP leaders make no secret of their hostility towards Christians. Says Baliram Kashyap, MP from Bastar, "Ajit Jogi claims to be a tribal which he is not. But he is a Christian and ever since he has taken over, conversions have been increasing. The Congress in Chhattisgarh is a Christian outfit." Social activists accuse the many kalyan ashrams in Chhattisgarh of slowly spreading hate in tribal pockets. Raman Singh, BJP state unit chief, denies this.

Raman himself is a Thakur. But the BJP is likely to opt for another Thakur, in the guise of Dileep Singh Judeo—a former maharaja linked to the VHP's anti-conversion drive—as its candidate for CM. The BJP has obviously pitted a non-tribal against Jogi as it hopes to garner the votes of the many prosperous urban middle-class conclaves in the state. About 40 per cent of the state's population is tribal, while 10 per cent is Dalit. Though there is no clear figure on Christian and non-Christian tribals, the BJP claims many are returning to the Hindu fold.

Though Raman says the Jogi government's corruption will be the main poll issue, it's clear the parivar will raise divisive issues. Says Kashyap, "Tanaav to nahin hai, lekin talmel bhi nahin hai (there is no tension but even assimilation is not good)." Raman admits that the BJP will demand a law similar to the Tamil Nadu one on banning conversion. And he too believes Modi would be effective.

State VHP chief Ramesh Modi goes a step further: "Gujarat will be replicated here. The VHP will work for the BJP. We do not see it as Hindus versus Christians but as Hindus versus Jogi." Local Congressmen admit the parivar outfits have succeeded in putting Jogi on the defensive about his Christian origins. Some of them wonder whether a Sonia campaign could backfire in this situation.