‘A Crime, Not An Auditing Mistake’

The CobraPost editor on the “odd” reactions to his sting operation, dubbed Red Spider 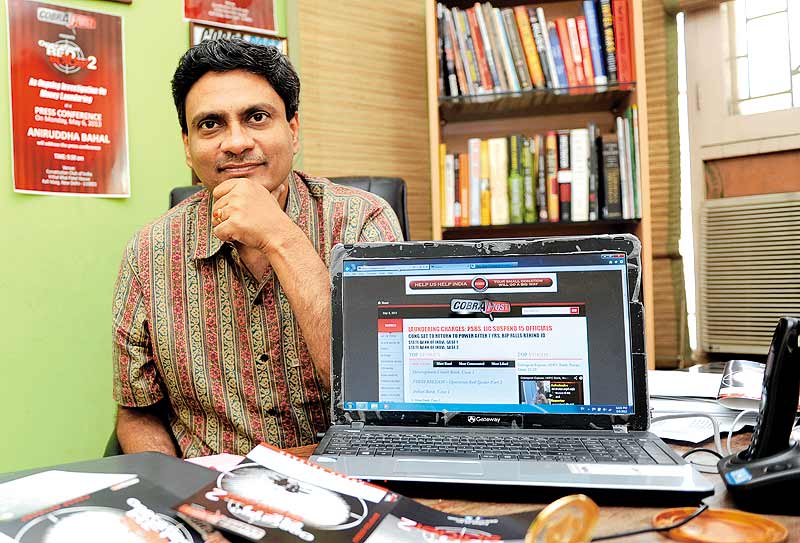 Investigative website CobraPost’s expo­ses have shown bankers across India, both public and private, promising the whole array of dirty tricks: money-laundering, opening dummy acc­ounts, and sending illegal funds overseas—to an undercover reporter. But though strict norms (such as Know Your Customer) seem to have been flagrantly flouted, the regulatory response has been tame: the banking association has been asked to conduct an inquiry. CobraPost editor Aniruddha Bahal talks to Pragya Singh on the “odd” reactions to his sting operation, dubbed Red Spider. Excerpts:

What do you make of the reactions of the authorities to Red Spider?

The reactions seem a little odd. Some say they already knew banks launder money, so what’s new. Yes, everybody knows there is black money, but does everybody know that mainstream blue-chip banks launder money? I don’t think so. It came as a big shock to me. The next surprise was how, from day one, different arms of government started protecting the banks. Within one hour,  the finance minister said he has spoken to the bank heads and that they had assured him nothing is wrong. The government should at least have waited until the banks start their own inquiries. This was like taking the version of a  criminal syndicate and leaving it at that. Now, after a long time, the RBI says it is taking suo motu action against those who had erred. The RBI is the regulator of both public and private banks and must act against both.

No money exchanged hands between your undercover reporter and the bank officials. Does this mean nothing culpable was done by them?

There are scores of laws in India related to crimes, banking, prevention of corruption and money-laundering, which say exactly the opposite—you need not have completed a transaction to be liable. Everyone on our tapes can be tried right now. They tell us how to subvert the law, how to push money under the radar, how to split it into different accounts, hide it under different names, how to make fake pan cards. Even such an attempt, forget actually doing it, is punishable.

Our reporter even called it ‘scam ka paisa’, but there wasn’t a single banker who told us they would not accept it.”

What made you stop at the point before giving the money?

We have brought them to the point of culpability. If I had also broken the law, they would have first booked me under the Prevention of Money Laundering Act. The expectation that CobraPost should have actually got money laundered is ridiculous. I went the whole way in Operation Duryodhana (an earlier sting) and they booked me—for abetting corruption. I mean, the state is a very venal state. They got me in the past for doing it, and now they have a different line—that I didn’t do it.

What laws have the bank officials broken on tape?

There is not a single KYC norm that they have not broken. They confess to transactions which are, without doubt, “unusual” transfers. There are confessions about transactions made from multiple accounts for a single beneficiary. The officers said they have been structuring transactions specifically to evade reporting to tax authorities. They even offer to disguise the identity of beneficial owner: “Apne naam mat karo, biwi ke naam karo.” There are confessions to having unexplained cash lying in bank accounts. One of the offers constantly made to the reporter was that he can make frequent cash transactions just below the withdrawal limit, to evade scrutiny. Even offering to do all these things is wrong. 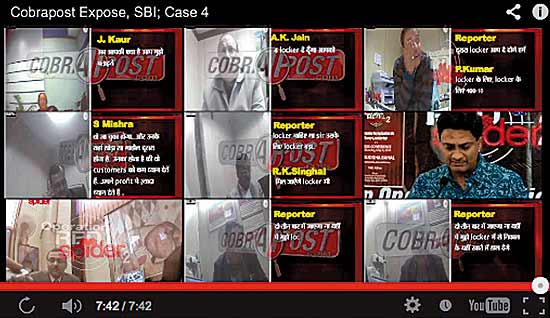 How do we know it’s a systemic problem and not just your sample?

We didn’t pick and choose bank branches based on any criteria except logistics. We went in randomly, and told the officers that we have black money. The reporter even called it “scam ka paisa” or politician’s money. There wasn’t a single banker who told us that under these circumstances they will not accept the money. Not one demanded a KYC. A couple refused to help, but still offered lockers for cash. A few refused, but only because they did not know the reporter personally, not because it’s illegal.

“The expectation that the sting operator should actually have got the money laundered is quite ridiculous.”

How about sending money overseas? Do you think the banks could really have done this without attracting attention?

Everyone is allowed to send a certain amount of money overseas, for specific, defined criteria—education, health reasons and so on. We went to banks saying that we had illegal money that we wanted to send overseas. And they said they would help us make it seem (using false papers) as if we have a legit reason for the transfer.

Also, some bankers claim on tape, oddly, that levying a TDS at the end of an insurance policy’s term would turn black money into white.

A lot of times we uncovered mis-selling, which is what this is. In such cases, whether you go with your black or white money doesn’t matter. They just try to sell you a product that they want to push. The nexus between insurance companies and banks can only break if all insurance products are standardised, and all banks offering these products don’t have a nexus with particular companies—they should offer all products at each branch or none at all. Otherwise, this myth of “customer choice” will keep getting perpetuated, and the only gainer is the mis-selling agent and now, even the banker.

The banks say they merely violated KYC terms, and that some junior officials were misguided....

Violation of KYC is a sureshot sign of money-laundering. What is money­-laundering, first of all? And, are KYC norms just a mere technicality? Our reporter is saying, “scam ka paisa hai”. This brings it immediately within the scope of the money-laundering act. So a guy is saying he has criminal money, but not one banker asked him what the source of his funds is. You understand the situation? How will you know what the source of funds is, if you don’t pose KYC queries and merely see it as an obstacle to overcome? “Yeh paisa kahan se aaya hai?” It’s a question nobody asked, so nobody knows. After this, the banks cannot claim that just KYC norms, as if they don’t really matter, have been violated. Or that just income-tax laws have been violated. In fact, these bankers claim they can turn disproportionate assets into white money. They claim to be experienced in this job. These are extra-judicial confessions, not innocent chatter.

What do you want regulators to do?

In one case, a bank official said that he has asked for his senior’s approval, via e-mail, to send a large amount of cash overseas. The government should have, by now, seized such e-mails and documents. Secondly, the Enforcement Dir­ectorate, which alone has expertise in investigating such crimes, must be pulled into action, like it was in the Sa­­r­adha scam. SEBI is not getting into the case. Money-laundering is a crime, not an auditing mistake. Who knows how many thousands of such hawala transactions will come to light. The banks are saying that these are individual, misguided employees going too far. Mark my words, if the ED comes to investigate, this will not remain their plea.