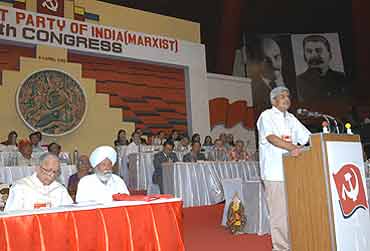 History Of The Communist Movement In India—The Formative Years 1920-1933
By The History Commission Of CPI(M)
LeftWord Pages: 248; Rs 450
Communists have had a peculiar relationship with history. At one level, Marxist theory opened up history as the discipline central to an understanding of all human endeavours—"historicise everything" in Frederic Jameson’s famous injunction. Critical Marxism has thus produced some of the most significant historical works, both in this country and in the West. Yet at another level, politically, Communists have always feared history and sought to regiment and control its production. Grey and dull pedagogical volumes like the History of the CPSU(B) written by Stalin’s handpicked commission was all that generations of Communists were fed on. Volumes like these were basically meant to "give the party line"—how Stalin was the liberator of all humanity and the likes of Trotsky, Bukharin, Zinoviev the scum of the earth, even "enemy agents".

Likewise, the 17th congress of the CPI(M), held in Hyderabad in March 2002, entrusted a commission comprising Harkishen Singh Surjeet, Jyoti Basu, E.K. Nayanar, P. Ramachandran, Koratala Satyanarayana and Anil Biswas to rewrite such an official history of the Indian Communist movement. The volume under review is the first of a series that the "History Commission" plans to bring out and covers the well-trodden ground of its formative years, especially the period from 1920 to 1933. The volume is as dreary as the History of the CPSU(B). The reason for this, of course, has to do with the fact that the commission has too many holy cows to protect. Apart from a purely one-dimensional understanding of historical processes, it is clearly restrained by the fact that it has to continue to be reverential to the long-dead Communist International (Comintern) and its Prophet—and all the mini-prophets it spawned.

The "dialectical" understanding of history, Communists tell us, accords centrality to the idea of "contradiction" and from this emerge, they say, their "weapons of criticism and self-criticism". Yet, in sharp contrast to critical Marxist traditions, the one thing a Communist can’t countenance is the idea of contradiction, nor ever accept the possibility that s/he could ever have been wrong. This is pretty much in evidence throughout this volume.

Merely one instance of how "history" is written by this august team will suffice for the time being. It is 1928: the period immediately before and after the notorious Sixth Congress of the Comintern, where it effected its most sectarian turn, both politically and organisationally. Up to this point, we all know and the authors assure us, M.N. Roy was pushing a sectarian line of opposing the bourgeois nationalist movements in the colonies. Suddenly we are told that in March 1928, Roy prepared a document for the Comintern executive committee entitled ‘Draft Resolution on the Indian Question’ which "reflected his right reformist tendencies". It was this "right reformism", we are further told, that led to his expulsion from the Comintern in 1929, as "he was accused of pursuing ‘the opportunist policy of a bloc with national bourgeoisie’". Now, when did the ‘sectarian’ Roy become the ‘reformist’ Roy? The authors do not care to tell us. We must simply believe the Comintern’s accusations. But this is not the most important point. What is significant is that while the book does tell us that the 6th congress adopted a sectarian position, opposed the formation of workers’ and peasants’ parties (WPPS) in India and wanted them disbanded, it maintains complete silence over the fact that this had a lot to do with Roy’s expulsion. Muzaffar Ahmed, the founder of the Communist party in Bengal, has published a letter from well-known British Indian Communist Clemens Dutt to this effect, in his memoirs. In fact, Dutt clarified, on Ahmed’s request, that one of the reasons Roy was expelled was that "he wanted to build a Workers’ and Peasants’ party as an alternative to the Communist Party". This silence is interesting because the formation of wpps was the result of a shared understanding among the local Communists and not just Roy’s initiative. This silence assumes strategic significance then, if one is to continue to vilify Roy.

Apart from such endless instances of authorial desire to control meaning and interpretation—even as history actually slips out of their grip—there are other serious problems with this book. To name just one: this is elite history at its worst—a history that moves between congresses, conferences and resolutions, with no sense of any movement and ferment anywhere on the ground.

(Aditya Nigam is Fellow at the Centre for the Study of Developing Societies, Delhi.)