TRS has to face an une­xpected adversary—the opposition’s ‘Praja Kutami’ (People’s Alliance) which is led by the Congress and includes the Telangana Jana Sam­ithi (TJS), TDP and the Communist Party of India. 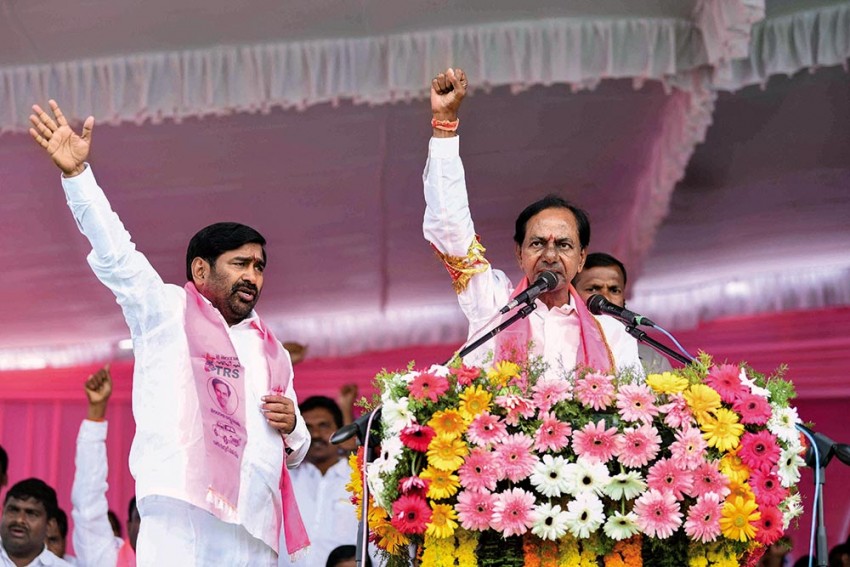 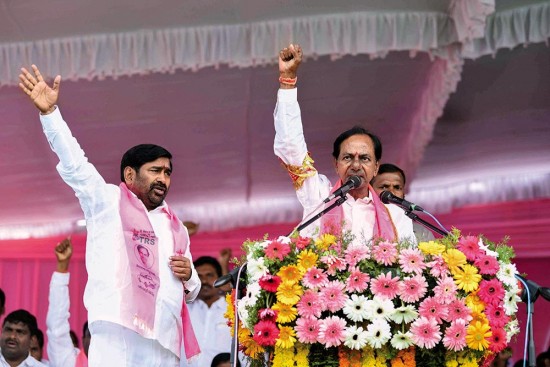 Telangana goes to the polls on December 7; the battle lines are drawn. A few surprises are, however, in store for commentators, for differences in social and economic conditions in each constituency make it notoriously difficult to gauge people’s mood. Predictions based on statistical models, too, don’t accurately ref­lect ground realities.

Telangana Rashtra Samiti (TRS) came to power in 2014 on the back of the successful bid for separate statehood. However, even then, they got only 34 per cent voteshare and just 63 seats in the 119-member assembly. In contrast, the Congress, which led UPA-II and was a major claimant for the creation of Telangana, got 25 seats with voteshare of 25.5 per cent. The people had also elected Telugu Desam Party candidates in 15 (a share of 12 per cent) seats. The BJP won five seats (3-4 per cent voteshare) and All India Maj­lis-e-Ittehadul Muslimeen (AIMIM) seven seats (2.7 per cent voteshare).

While the TRS has provided reasonably good governance and won accolades for maintaining an excellent growth rate, urban voters are upset with rising unemployment, worsening conditions of roads and other civic issues.

North Telangana, with 54 crucial seats, is a bastion of the TRS. The alliance is strong in the south, with 31 seats.

However, the TRS, which decided to hold early polls, partly fearing the ‘Modi-factor’ in April/May, when they were originally scheduled, has to face an une­xpected adversary—the opposition’s ‘Praja Kutami’ (People’s Alliance) which is led by the Congress and includes the Telangana Jana Sam­ithi (TJS), TDP and the Communist Party of India. This ‘grand alliance’ is confident of ending K. Chandrasekhara Rao’s rule. The Congress was quick to seize upon and channelise people’s anger over une­mployment and large-scale corruption, especially in major irrigation projects. “Several major irrigation projects were redesigned to hoo­­­­dwink people.  The hidden agenda was to jack up costs. Coastal Andhra contractors are the beneficiaries,” alleges Konda Visveshwar Reddy, an MP who recently left TRS to join the Congress.

Telangana Congress also took heart from the well-attended rally of UPA chairperson Sonia Gandhi in Medchal town, where she accused KCR and TRS of letting down people. “One meeting may not be a game-changer. She should address more rallies in the north, where the TRS has an upper hand,” feels student leader Leo Augustine.

The TRS, naturally, hasn’t been sitting idle. KCR himself has addressed over 50 rallies of the promised 120, covering almost all 119 constituencies. He oozes confidence in his bid to win over 100 seats. His son K.T. Rama Rao, nephew T. Harish Rao and daughter and MP Kavitha are also attacking the Praja Kutami as ‘anti-people’ and ‘anti-region’ at their rallies.

The TRS is very strong in north Telangana, where 54 seats are up for grabs. Many feel that unless a star leader like Sonia addresses a rally or two there, it may be difficult to stop the TRS juggernaut. “Unless we (Praja Kutami) breach the TRS citadel and win at least 20-25 seats, it would be difficult for us,” admits a Congress leader.

The Congress-led alliance is on firm ground in southern Telangana, inc­luding Warangal, Khammam and Nalgonda districts, but they comprise only 31 seats. However, It won’t be surprising if the Praja Kutami bags as many as 20-25 seats here. Another critical area is Mahbubnagar and Rangareddy districts, besides Hyd­erabad, with a total of 24 seats. Here, too, the TRS is sitting pretty with support of its erstwhile ally AIMIM, which is likely to retain all seven Hyderabad seats. The BJP, which has five seats, is fighting to ret­ain them, but may end up getting just three. The TRS, which had won a resounding victory in the Greater Hyderabad Municipal Corporation polls, is not only expected to retain its eight seats, but win more.

On the eve of polls, the TRS appears to have a clear edge over the alliance. Even if it falls short of the number required to form a government, the AIMIM could bail them out. But that’s on paper. If indeed that transpires, and the Praja Kutami too manages to cross the 50-mark, who will the AIMIM support? It’s a question worth pondering.