A City Of Yellow Paint

The 'monkey man' mystery is just an annual ritual for Delhi—its daily life runs on rumours, small and big

outlookindia.com
-0001-11-30T00:00:00+0553
Kya khabar hai?" These three little words, casually dropped, can mean a serendipitous encounter with a goldmine of information/disinformation: that X chief minister met Y party president and therefore the government will fall. That a cabinet minister is dating his son's girlfriend. That two MPs came to blows over a well-known starlet. That a top pmo official is twisting a minister's arms to his nephew's benefit.

The Indian credulity threshold overall is pretty low. Delhi is particularly rumour-prone for two reasons: first, it is the seat of government and, therefore, the theatre of political and bureaucratic intrigue, and second, of course, is its pot-pourri character. Rumours tend to spread faster in a heterogeneous environment, points out gossip writer and PR consultant Dilip Cherian, "Nobody belongs to Delhi...everyone is a bird of passage. It is a confluence point, a place where various lobbies jostle."

The city's babu culture is geared towards rumour-mongering. From multiple arms of the government, countless scraps of information slip-slide their way on to the street, mutating into rumours. Thus, the PM's crumbling knee becomes a case of cancer. Health bulletins were issued by the day by those who claimed to be in the know. Similarly, one can get ready inputs on the next rss plan to checkmate Vajpayee or the latter's subterranean move to rein in the Sangh.

There are various kinds of rumours that do the rounds. Delhi specialises in the political rumour. Distinct from gossip, it's always motivated, intended by the rumour-monger to serve a definite political purpose. For instance, the "salt shortage" rumour floated in the wake of the onion shortage of 1998, which led to its price shooting up, was timed with assembly elections in Delhi. Despite frantic Central government advertisements denying the rumour, it added to the anti-incumbency factor against the bjp.

According to eminent social scientist D.L. Sheth, the political rumour assumes a positive role in an authoritarian regime where the press is coopted or subject to censorship. "The rumour mill becomes the most important form of communication. It's also a means of resistance, of mobilising opinion. Delhi during the Emergency was rife with rumours. The establishment was afraid of rumours and constantly exhorted the public not to believe them".

Then there's the far more dangerous negative rumour, which is intended to incite people and is a crime under the ipc and the Delhi Police Act. It is related to religious, caste or parochial issues. In nine out of ten cases, communal riots have been sparked off by rumours. In this category fall the recent rumour of copies of the Quran being burnt, or (as in 1984 and 1999) members of minority communities poisoning Delhi's water. That even the recent monkey man rumour is given a political colour is typical of Delhi. The Shiv Sena city unit claimed that "the isi is behind it; 131 monkeys have come across the border to spread terror".

For a political rumour to achieve its goal it must be credible. The truly successful rumour serves the latent expectations of the people. It's something they want or expect to hear, a kind of wish fulfilment.In 1998, a city disenchanted with its political class and bureaucracy was only too willing to believe that this or that cop/MP/secretary in the government was involved with Romesh Sharma, Dawood Ibrahim's man in Delhi. 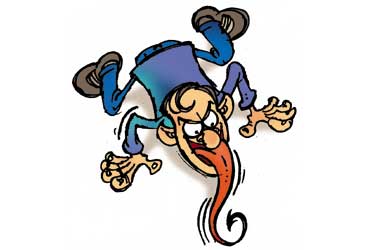 Since public perceptions change, the timing of the rumour must be right for its success. Rumours of Kashmir being sprayed with nerve gas wouldn't cut much ice in peace-time. But it gained currency during the peak of the Kargil conflict. Similarly, the salt-shortage rumour gained credibility because the city was already reeling under an onion crisis. It was only logical to conclude that a salt crisis was possible.

Political rumour forms an integral part of every party's propaganda armoury. The effectiveness of a party's communication experts can be measured by the success of their rumour-mongering. There are three ways a party communicates with voters—direct contact through rallies and public meetings, through its workers and through the mass media. The second is the most effective means of communication, and more often than not for spreading rumours at the village level.

The efficacy of a party's propaganda machine depends on (a) the strength of its cadre and (b) communication between the centre and the party worker. Here, cadre-based parties have the edge. The Sangh parivar's alleged rumour-mongering often compelled the late V.N. Gadgil to say: "rss stands for 'rumour-spreading society'." To the rss is attributed the famous 1975 rumour of sterilisation being practised in Delhi schools.

Every now and then, Sonia Gandhi's Catholic and Italian moorings become raw material for rumours. After Vajpayee was toppled in 1999, the rumour that Sonia's mother and sister had flown down from Italy to witness her triumphant swearing-in as PM, damaged Congress prospects in the general elections, at least in Delhi.

The primary purveyors of the political rumour are invariably educated people, while their target audience is by and large the semi-literate or the illiterate. The life of the rumour is determined by how long it takes to explode, or to become a fact. Should there be no strong denial or reaction then the rumour is no longer an untruth.

Gossip and rumour overlap, with the difference that the former is invariably personality-based. Internecine rivalry (who's shafting whom), petty ambitions (who's lobbying for what), graft (who made how much) and sexual peccadilloes (who's sleeping with whom) are favourite subjects of gossip.

Rumours appear in gossip columns when they can't be substantiated—they may or may not be based on truth. The marital indiscretions of actor/MP Shatrughan Sinha appeared as a news item in a Hindi daily (based on a divorce petition) but those of the first (foster) son-in-law appeared in the same daily as a diary item.

Again, transparency is the key—rumour thrives in inverse proportion to media access. The more restricted the information, the more frequent the rumours. Palace gossip flourishes, whether it's centred around the Windsors or 10, Janpath or 7, Race Course Road when the goings-on tend to be clouded in secrecy. Observes Sheth: "Gossip is the bane of all capital cities."

Political rivalries are played out in newspapers through rumours and counter-rumours which pass off as news analysis. The current top rumour in the Congress is that Madhavrao Scindia is preparing to show his "Maratha colours" and attempting to split the party. There's no evidence, merely some statements from Scindia on the formation of an alternative government and the party's rumour mill, activated by Scindia's rivals in the cwc.And no sooner had Fathima Beevi sworn in Jayalalitha than Najma Heptullah's detractors got into the act, claiming the TN governor had displaced her as the frontrunner in the race for vice-president. There was no logical basis for this but it was picked up. Hatched by the media and fed to politicians, the rumour acquired a life of its own.

But the one that captures more media space and public imagination is the on-off feud between the PM and his home minister. To quote a three-wheeler driver post-Tehelka: "This Tehelka business is nothing but a conspiracy to destabilise the PM. Advani is behind it. You know, he comes from Pakistan." Rumours surrounding the PM's health have also originated from what the press describes as the "Advani camp".

Within political formations, rumours proliferate if there is no grievance-redressal mechanism. Unable to vent their pique directly, disgruntled party members resort to rumours. A classic instance of a successful rumour was the campaign against Vincent George. In late 1999, an unsigned pamphlet did the rounds, charging George with all kinds of misdemeanours. It found a ready audience among partymen, who spoke of nothing else for days. The press then followed it up and sure enough, it turned out that the cbi was investigating George. Says Congressman and ace-pamphleteer Namit Verma: "I was amazed at the number of people who took credit for the pamphlet...it was an indication of just how angry they were with George."

The bjp party worker is no less disgruntled, accounting for the widespread rumours of a Vajpayee-Sonia jugalbandi.

Mediapersons know who the rumour-mongers in each party are. All politicians indulge in it, but some do it all the time. Deputy chairperson Najma Heptullah's room in Parliament is the hub of gossip, as is that of parliamentary affairs minister Pramod Mahajan. The press plays ball with politicians/bureaucrats for its own reasons, which may not be kosher. Gossip columns are more popular than hard news and sell more copies; small wonder gossip is spilling over into news pages. In the age of TV, bare-bones news is no longer enough. Hence, the search for news behind the news.

The main centres of political gossip are Parliament's Central Hall, Lodi Gardens, Nehru Park, the Press Club of India and the iic. But the palm, says MP and gossip writer Rajiv Shukla, goes to the paan shop in front of the Indian Newspaper Society office, where journalists meet and exchange gossip throughout the day. The Internet, particularly sites like sword oftruth.com and the now defunct delhigossip.com, were quick to catch on.

Intelligence agencies also have a major role to play in rumour-mongering, says a senior IB officer in charge of Delhi. The government of the day often uses rumours as sounding boards. Information is leaked in the form of rumours and feedback obtained. This is done especially during elections. One classic instance was press reports quoting IB sources as saying the Babri Masjid would fall—events, however, overtook the rumour before it could gain currency. The government may also use the rumour as a safety valve, to defuse anger over an impending negative decision. For instance, the cut in ppf interest rates was endlessly discussed before being actually implemented in Budget 2001.

In Delhi, say intelligence operatives, rumours are disseminated through several nodes. The most important one being the dms (Delhi Milk Scheme) booth, where people line up from 5 am."That's where, we believe, the rumour about idols of Ganesh drinking milk originated and spread in the early morning," observes the IB officer. The doodhwala, who comes to Delhi from the hinterland, is another source of rumour. The monkey man buzz originated in Ghaziabad and then spread to East Delhi through the gwala network.

In the walled city, the paan shop and the halwai are nodal centres for rumours. In these urban chaupals the Punjab Kesri is discussed from first page to last. In government colonies, barber shops play a similar role—restricted information from government offices is shared and exaggerated.

Like the government, corporate houses also use rumours. Says Cherian: "If a business house is interested in the power sector of a state and wants to ensure that a particular decision is not taken, it spreads the rumour that the CM has taken money... rumours are often planted by lobbies interested in the power and petroleum sector or in the stockmarkets."

But if all rumours were to be believed, the ranks of our politicians would have been considerably thinned by hiv (In one case, by a viagra-induced heart attack). Others would have a perpetual case of priapism fuelled by shilajeet, royal jelly and rhinoceros urine. And still others would be rich enough to figure in Fortune's top 100. The underworld and corporate lobbies would run the government and the isi would have smuggled in more illicit arms than are contained in our ordnance depots.