A Cheetah Is Reborn

Munaf Patel streaks into our skies with tearaway pace. Will he hit seam? 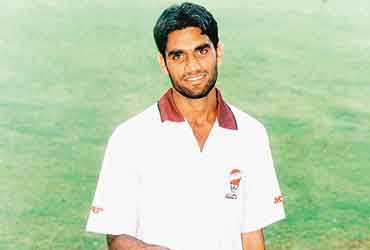 outlookindia.com
-0001-11-30T00:00:00+0553
He's 20 years old, 6'4", and is a school dropout. He comes from an impoverished Muslim family in Ikhar, a nondescript hamlet in Bharuch, Gujarat. His peasant father's earnings were not even enough to buy a TV. Just a year ago, he didn't have a pair of shoes, let alone a cricket kit. Now, he is being hailed as the future of Indian fast bowling.

Munaf Patel's life has changed dramatically in the last few months. At the MRF Pace Foundation in Chennai, he reportedly regularly clocked between 140-150 kmph. Speedster god Dennis Lillee says he "has the potential to be a world-class bowler". The Aussie's opinion spread like wildfire. Although not among the 36 probables for the series against New Zealand and Australia, the BCCI invited Munaf to the conditioning camp in Bangalore. It was a chance of a lifetime, and Munaf grabbed it in style, troubling India's leading batsmen with his brutal pace and rising deliveries, winning rich praise from even the visiting Steve Waugh.

All this and you have to consider that he was yet to make his first-class debut! But he will, this week. No, not in the Ranji Trophy, but in a three-day match between India A and New Zealand at Rajkot.

"I'm thrilled by the happy turn of events of late," says Munaf. "New Zealand has experienced batsmen and I look forward to bowling against them. I'll try my utmost to justify the selectors' confidence in me." Observers are already talking about Munaf sharing the new ball for India with Zaheer Khan. And of course, multinationals are queuing up to ask him to endorse their products!

Naturally, his parents had tried to dissuade Munaf from playing cricket and "wasting his precious years". "I knew I had to help my father shoulder the family responsibility by earning," he admits. "But cricket has always been my passion, so giving it up was out of the question. I was confident of my ability, sure that one day the game would make my parents proud of me."

Indeed, Munaf has been the hero of his hamlet for long. Initially, though, it was for his batting. People would throng to the ground to watch him smash bowlers in local matches. Local fans still talk about his 40-ball hundred that included 7 sixes. Another time, he felled one Sarfaraz Patel with a bouncer. The poor man reportedly gave up cricket altogether after that!

Encouragement from ex-Baroda player Dhansukh Patel and financial assistance from people in his village saw Munaf land in Kiran More's cricket academy in Baroda. The latter got him into the Chennai nursery for pace aces where his skills flourished under the watchful eyes of Lillee and T.A. Sekhar. Lillee gave him vital tips, including some technical changes, which worked wonders. The rest is history.

At least three teams—Baroda, Gujarat and Mumbai—have shown interest in Munaf. If he decides on Baroda, he will be one of the three classy Muslim speed merchants—Irfan Pathan and Zaheer Khan are the other two—it has let loose in recent years. A remarkable coincidence: India's first true fast bowler, Mohammed Nissar, was also a Muslim. Munaf may well be India's only genuine pacer since Nissar set the pitch ablaze seven decades ago bowling in tandem with Ladha Amar Singh. (The latter being the one of whom legendary English bat Wally Hammond said "he came off the pitch like the crack of doom".)

Munaf too shares more with Nissar's partner. Like India's first world-class all-rounder, Munaf has hostile pace and is a hard-hitting batsman. Amar Singh had first-hand experience of poverty. So does Munaf. Amar Singh didn't get beyond matriculation. Neither has Munaf. And like the ex-Kathiawar cricketer, Munaf generates lively pace from a short run-up.

So, will Munaf live up to the high expectations he's triggered off? There are few doubts on his talent but he relies too heavily on pace now.He's yet to master the difficult art of moving the new ball either way although his stinging yorkers can unnerve the best of batsmen. What is clear, though, is that Munaf is a rare gem discovered quite by chance. As Brett Lee said, we must nurture him carefully rather than expose him before he is ready for centrestage.