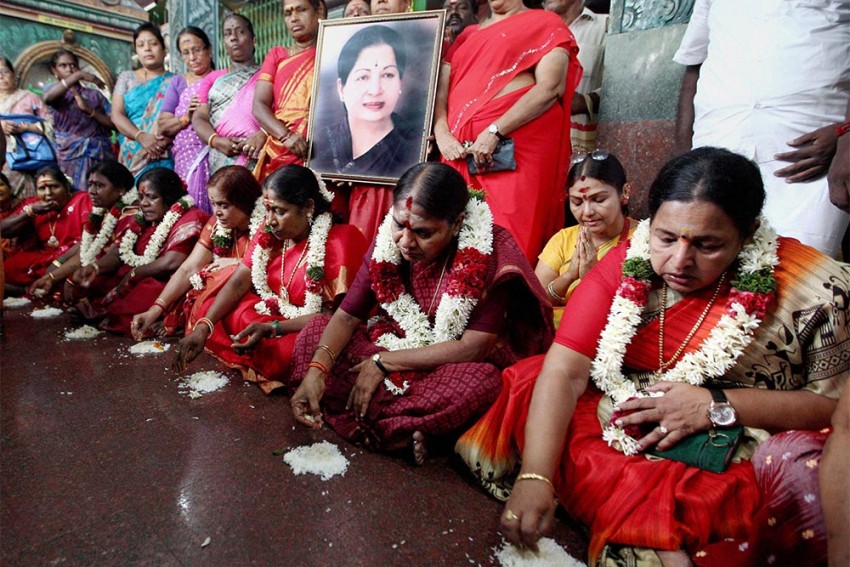 AIADMK women’s wing members have a meal after a prayer for the speedy recovery of CM Jayalalitha
Photograph by PTI
Ajay Sukumaran October 06, 2016 00:00 IST A Certified Bedrest 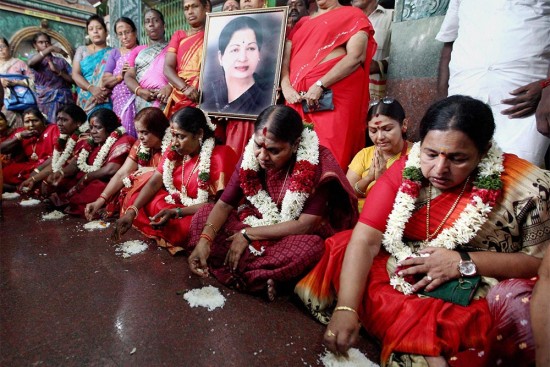 In May last year, when J. Jayalalitha made a triumphant ret­urn to Fort St. George after winning an appeal in the corruption case hounding her for nearly two decades, it was acc­o­mpanied by a stamp of near invincibility. Polls were hardly a year away, but here was a chief minister who was mak­ing a comeback without any apparent dent in her popularity.

But hardly a month after that began the speculation that is now a fixation in Tamil Nadu politics, and recently the subject of a public interest litigation: how ill is the CM? When she was sworn in as CM in May 2015 after the Karnataka High Court acquitted her in the wealth case, Jayalalitha was making her first public appearance after spending seven months confined to her home. And, it didn’t take long after that for the perception to gain ground that the CM wasn’t her old self, much as her party sought to dispel it.

Gossip and speculation about Jaya­lali­tha’s health was aplenty during the state polls this year, even as the AIADMK supr­emo waded into the thick of battle,  going all out for Tamil Nadu’s 234 assembly seats without any allies—something the AIADMK hadn’t ever done, even when its charismatic founder M.G. Ram­achandran was alive. And, true to her style, the party’s election rallies turned out mammoth gath­erings of people all fired-up for a glimpse of the leader. At her election rallies, Jayalalitha sat at a desk on stage and seemingly found it difficult to walk. But her speeches were forceful and had plenty of bite, especially as she reeled out charges aga­­inst her arch-rival, the wheelchair-­bound M. Karunanidhi (who was on his own campaign tour), and exhorting the cro­­wds to teach them a lesson. “Seivingala? (Will you do it?)” was the exhortation that punctuated every finger-pointing line of hers.

While gossip about her health this past year came in the absence of any official accounts, Jayalalitha’s partymen have always brushed off these concerns, saying their leader was hands-on as usual. Indeed, the party’s style of functioning is something you’d hear about even in street discussions, because in the AIADMK, it’s typically understood that faces don’t matter much. The AIADMK supremo is known to crack the whip on erring partymen (in the election season, even someone like O. Pann­ee­r­sel­vam, the loyalist who stood in for her as CM when she had to step down, hadn’t been spared) and shunt people around. And she would often replace sitting MLAs with fresh faces, some of them relatively unkn­own. ‘Amma’ was always seen to be in control and, needless to say, she evoked such awe that none dared to speak out of turn.

“It is the ruling party’s actions that creates suspicion in the minds of the people,” says DMK spokesman T.K.S. Elangovan, of the turn of events after Jayalalitha was hospitalised late last month. Loyal party cadres have been camping at the Apollo Hospital on Chennai’s Greams Road, praying for her recovery. To be sure, there have been medical bulletins released by the hospital every other day. “For a CM, it’s the chief secretary or the health minister who should officially release periodic treatment bulletins. But here, the authorities are not doing it, only the political party and the hospital are doing it. When people are agitated, particularly her own party cadres, the government should come out with a statement which will at least provide solace,” he says. But critics have also pointed out that information hadn’t been forthcoming when Karunanidhi had been hospitalised a few years ago when he was CM. Nor has any explanation been given, some point out, about his son (and DMK treasurer) Stalin’s trips abroad. To be sure, it isn’t Tamil Nadu alone where these confusions prevail. Inf­or­­mation was equally scarce when Con­gress president Sonia Gandhi took ill a few years ago and was flown to the US for treatment.

“It’s a personality driven political system and this is true about Tamil Nadu and of other states. But in TN, it’s much more visible and has been so for quite some time,” says R. Manivannan, professor of politics at Mad­ras University. It’s also a continuing historical coincidence, as a commentator points out: all iconic leaders from Tamil Nadu, from C.N. Annadurai to MGR and Karu­nanidhi and now Jayalalitha, have req­u­ired hospitalisation when they were at the helm.

On Monday, Apollo Hospital’s medical bulletin said the CM continues to imp­rove and that she was responding to the comprehensive treatment. “The treatment plan, including appropriate antibiotics, res­­piratory support and other allied clinical measures, are presently being continued to treat the infection,” it said. The hos­­pital had earlier flown in Rich­ard Beale, a consultant intensivist with a UK hospital.

As for Karunanidhi’s suggestion that the government release a photograph to allay fears, C.R. Saraswathi, AIADMK spokesman, hits back: “How can an opposition party leader talk like that? Our CM is a fem­ale, she is in hospital. The question its­elf sounds silly. How can you take a photograph of the CM and publicise it? Even if you did that, they’ll ask whether it is a real photo. He wants to play politics on this.”

Saraswathi says secretaries and important ministers have been in touch with the CM every day and that government work is going on routinely. Even the state’s stand at the meeting on the Cauvery impasse, convened by Union minister Uma Bharti, was dictated by Jayalalitha, she says. “What she said is what they read there. They had a one-hour meeting in the hospital the day before they went to Delhi,” she says. The DMK’s Ela­ngovan, however, says some questions need answers. “See, an elected government should run as per the constitutional provisions. Now, whatever action is being taken by the government...we don’t know under whose authority they are being taken.”

In the past week, the TN police have lodged complaints and tracked down false social media messages that fuelled speculation. One of them, says Saraswathi, was tracked to an account operated by a woman in France. “I’m sorry to say that social media is being misused. They have to say better things, not gossip and rumours.”

“Pak Trying To Finish ­Off J&K By Radicalising ­Kashmiris”