A bureaucrat delegates authority to make the system work 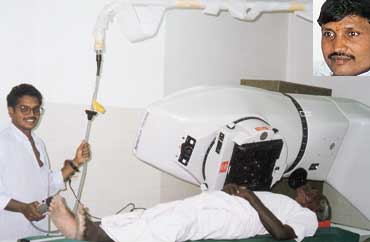 outlookindia.com
-0001-11-30T00:00:00+0553
Satish Chandra is an IAS officer on a mission—to involve more ordinary people in governance. Currently the district collector of East Godavari in coastal Andhra Pradesh, Chandra has initiated several innovations to put ordinary people at the helm of affairs.

The six-decade-old, government-run Rangaraya Medical Hospital-cum-medical college is a case in point. Dilapidated and ill-equipped till some years ago, it has transformed itself into a referral centre with state-of-the-art medical equipment under Chandra's chairmanship. It helped that the doctors were put in charge of their departments—even while raising funds for the latest equipment, or for market surveys and while negotiating prices with manufacturing companies. He even managed donations for a German-made cat-scan machine. Chandra also introduced nominal user-charges with the decision to waive charges for the very poor left to the heads of the departments. "We are happy now professionally and want to build up our department," said Dr K. Shivshankar, head of the radiotherapy department.

"Getting funds wasn't a problem," says Chandra. "Besides government funds, our mlas and MPs gave grants and we got a good bargain from companies. After all, the government is their biggest customer." Today, the hospital has 20 speciality and eight super-speciality departments. More importantly, it's forced the competition to cut rates for treatment.

Chandra has introduced this system of decentralisation in other parts of the district administration too. One of his biggest experiments is the "people's estimate" wherein direct beneficiaries get to work with the rural development department to prepare budget estimates for public buildings, roads, drains etc and supervise construction in their respective areas. No contractors are hired. Departmental engineers supervise the construction and handle the cash. The state chief minister has already asked other collectors to try out the experiment in their districts.

Way back in 1996 itself, the district administration led by Chandra had helped out several fishermen who had lost their boats in a cyclone. The loss of boats and tackle, estimated at Rs 12.90 crore, had been declared a national disaster. Chandra directly involved the fishermen in the rebuilding of their boats. Awareness camps were held in 67 villages and genuine beneficiaries were identified at gram sabhas held by the fishermen themselves. The chosen lot were then given training so that they could closely supervise the building of their new boats. The beneficiaries were asked to prepare budget estimates for their upgraded boats, depending on the design and size they desired. Raw materials were procured at competitive prices and the defunct government-owned boatyard was refurbished to stock raw materials. And the boatyard's ex-employees got together and formed a registered society of boat builders, using their experience in their new role!

Chandra used a similar strategy with poor rural artisans who, in the year 2000, sat with the sarpanch and the block- and district-level rdos to decide among themselves the most deserving candidates for the state's 'Adarna scheme'.

AP's record with regard to child labour is poor, but even here Chandra has successfully used the minimum wages act to book employers in his district. "I went through all the laws and found this was the only Act I could use effectively to book offenders," he says. The action has 'freed' at least 6,000 children, and has also proved a deterrent to potential offenders. However, child labour still exists in the district.

In all his work, Chandra focuses on three aspects. First is his belief in honesty. "I believe in reducing grey areas where middlemen can make money," he says.The second is managing people for change. "In any system, there are some good people," says Chandra. "My strategy is to find them, treat them as equals and work with them. They, in turn, influence others." The third is accessibility—to people, to feedback and to new ideas. "For most government functionaries, 'power' means throwing crumbs of favour and charging illegal money for it. Power should mean discharging one's duty properly." Looks like Chandra is doing just that. For further details, contact: Satish Chandra, District Collectorate, Kakinada, East Godavari, AP. Ph: 0884-365428/365424.