A Bullet With Someone’s Name

In a quiet village in Kerala, Javed’s father mourns a son who converted to marry his love 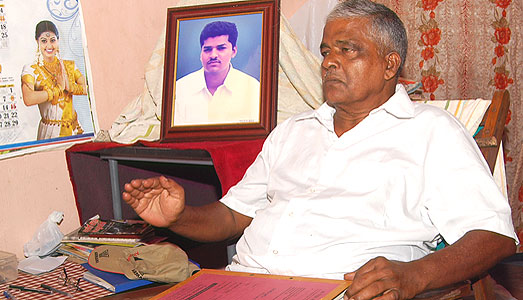 Nooranad is a sleepy village in Kerala’s Alappuzha district. But it has come in for media attention after magistrate S.P. Tamang’s recent report concluded that the Gujarat police had killed Pranesh Pillai alias Javed Sheikh, a native of this village, in a fake encounter in June 2004. Shot dead with him in that “encounter” were Jishan Johar, Amjadali Rana and Ishrat Jahan. The police alleged they were Lashkar-e-Toiba terrorists plotting to assassinate Gujarat chief minister Narendra Modi.

Pranesh’s 69-year-old father M.R. Gopinath Pillai, a former employee of BHEL, still lives here. He has been recounting to the media the trauma he’s undergone since the cops killed his son, branding him a terrorist. “The past five years and two months have been traumatic. My son could never be a terrorist,” he says. “Pranesh converted not out of love for Islam but because he thought there was no option if he wanted to marry the girl of his choice.”