Delhi hasn't ratified the Indira-Mujib accord, but nor has Dhaka 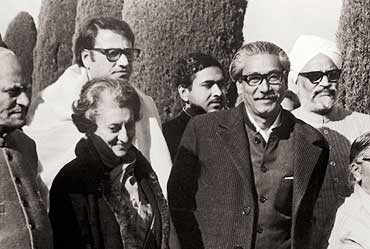 It was only after the recent flare-up on the border that the officials were forced to re-study the accord and other related documents. It has reportedly transpired that though Dhaka ratified the accord, it introduced a clause which makes implementation possible only after boundary demarcation.

Also, every possible roadblock was put up by Bangladesh to stall the demarcation. This made the accord's implementation virtually impossible. Says G.K. Pillai, joint secretary (northeast) in the home ministry: "They (Bangladesh) have been fooling their people and they're trying to fool us too. This is like saying that 'we accept only those portions of the accord that suit us, the rest doesn't come into force because it doesn't suit us'."