A Bonfire Of Vanities

That obscure demon, anti-incumbency, stalks the BJP in Himachal and Modi's Hindutva campaign could be a dubious boon More Coverage 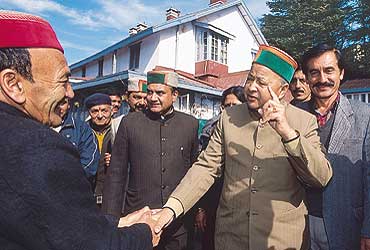 With Modi having promised to campaign, Dhumal's optimism has gone up. But the ground reality is not so comforting. The BJP and the Congress are in equal strength in the assembly—both have 31 seats each—and the BJP government survives thanks to Sukh Ram's Himachal Vikas Party (HVP). Yet, Dhumal says: "I believe a strong anti-terrorism plank can mobilise people in our favour." Maheshwar Singh, BJP MP from Mandi, agrees: "Narendra Modi is now in demand as a campaigner everywhere. He will talk about issues like terrorism. But no one can run a communal campaign in Himachal. In Kullu we have Gujjars and we don't even think of them as Muslims!"

Himachal's Congress strongman Virbhadra Singh scoffs at the BJP's evolving strategy: "It's a joke. The BJP here is a big joke. They're desperate and Modi as a messiah is the biggest joke." He admits that post-Gujarat, the BJP is more upbeat but heaps scorn on the attempt to make terrorism the poll plank. "From where will Modi and Dhumal import terrorism into Himachal? Will they import it from West Asia, from Afghanistan or Pakistan? I wonder if they have some ill-conceived plan to stage-manage some terrorist incident in the state. If they try it they will find us more than a match."