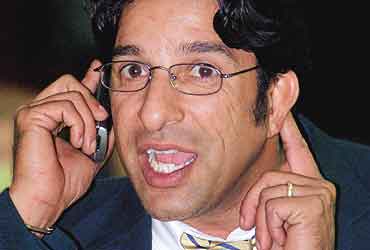 outlookindia.com
-0001-11-30T00:00:00+0553
Former Pakistan captain Wasim Akram may deny it vehemently. And the Pakistan Cricket Board (PCB) may continue to maintain a stoic silence. But the investigating arm of the ICC, the Anti-Corruption and Security Unit (ACU), is actively pursuing its investigations into the June 8, 1999, World Cup match at Old Trafford, Manchester, between India and Pakistan. And they think the match was "fixed".

Martin Hawkins, the ACU's senior investigator, told Outlook as much from London. "There is compelling circumstantial evidence. I cannot discuss the lines of enquiry as it is very important for the ACU to maintain some discretion," he said. However, other ACU sources say the investigations were being carried out to ensure the "game is not tainted henceforth" and that Akram does not exercise any influence in any official cricketing body.

The ICC has also decided to deploy three anti-corruption officials besides several observers in the forthcoming India-Pakistan series, concerned as it is that match-fixers may become "active" again. "The stakes are very high in India-Pakistan matches. So we have to take the utmost care. We are not making any allegations against anyone but given the past record we are suspicious," says an ICC official.

The case against Akram is built around a three-page statement of a Delhi businessman to the ACU. His testimony (published in Outlook's Feb 16 issue) reveals he was witness to punter Ratan Mehta "arranging the underperformance" of Pakistani players, including Akram, in the Manchester match. This happened in a London bar. The businessman had also testified that Mehta said he had "sorted out" 10 members of the Pakistani team. This crucial deposition forms part of ACU chief Lord Condon's confidential correspondence to the PCB. The thrust of the circumstantial evidence was that Mehta was responsible for fixing this high-stakes game which Pakistan lost under suspicious circumstances.

When contacted by Outlook in Lahore, Akram quickly rubbished claims of "fixing" the 1999 World Cup game. "I was with my family before the Manchester match. It is all nonsense that Mehta called me up to underperform." However, the ex-Pakistan captain admitted he had met Mehta on a couple of occasions and had also visited his restaurant, Mini Mahal, along with the team in 1999 when they toured India last. "Let me tell you that I know a lot of people. Nobody can ever f——-g say I fix matches. Where's the proof?" When told there was a signed testimony before the ACU that Mehta had called him, Salim Malik, and Azharuddin 3-4 days before the Manchester match, Akram said, "Nobody called any of us. I don't know about Azharuddin."

Interestingly, Mehta had told the cbi when it was probing the match-fixing case in 2000 that "he was intimate with Wasim Akram, Waqar Younus, Inzamam-ul-Haq and Saeed Anwar" and that he had "taken the opinion of Pakistani players on a few occasions" and also given them "small gifts". When contacted, Mohammed Azharuddin, who has also been named by the Delhi businessman, expressed shock. As for the former Pakistani captain, Azhar was evasive: "I would not like to comment on Akram on these matters," he said.

Clearly, the focus of the ACU's ongoing inquiry is Akram, though the agency has had little or no help from the PCB since Lord Condon submitted his correspondence in September '02 and again wrote to them in March '03. "We expected more cooperation. But it seems the PCB has its own reasons for hushing the entire matter up," an ICC official told Outlook.

That Akram is guilty of possessing incomes/assets disproportionate to known sources of income is evident by his confession and plea for forgiveness which he made when he was summoned back to Pakistan immediately after the 1999 Cup.The Accountability Cell of the Pakistan prime minister's office interrogated him for four continuous days. Akram finally admitted he had been concealing income from the tax authorities and later requested the Pakistan president for pardon. "I request the president of Pakistan, who is also the patron of the PCB, to pardon me from the above associated omissions/ commissions that have been committed in the past.... I hereby declare on oath that if I am again privileged and honoured to represent Pakistan in international matches, I shall ensure that I shall abide by the PCB/ICC code of conduct.... I therefore request that my past errors and mistakes may be forgiven," Akram stated.

In a confession before the Accountability Cell which is in Outlook's possession (see box), Akram explains at length his assets and the foreign earnings which he had deliberately not disclosed to the tax authorities in Pakistan.

Besides the World Cup match, Akram is also part of a wider probe being conducted by the ACU. This relates to his role in the 2002 Champions Trophy in Sri Lanka. The ACU notes that "Akram and Waqar Younus were regularly seen in the company of an unidentified Sri Lankan in the Hilton hotel", when the rest of the team was staying in the Taj Samudra. The man, say Lankan sources, is said to be involved in criminal activities and his background is being traced with the help of Interpol. Akram's reply to this charge: "I had gone to the Hilton for a wedding."

Another ICC official, currently there to oversee security arrangements ahead of the Australia-Lanka series told Outlook, "Circumstances do point to the fact that Akram's role was suspicious. Since there were acts of omission, it is important that the PCB keeps its house clean particularly when it is plagued by growing cases of indiscipline and corruption."

Meanwhile, about the allegation of Shane Warne's alleged meeting with Ratan Mehta at a London restaurant, the ICC spokesperson told Outlook, "The ACU has not said it is a closed case." Very clearly, one has not heard the last word on Warne either.