The Untouchables of our era. The ones, who despite hard facts, get away only because of the equations of power. 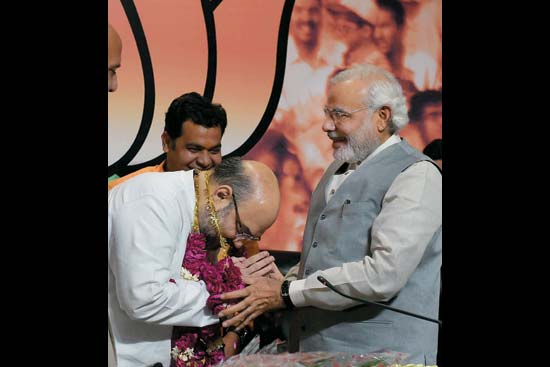 outlookindia.com
-0001-11-30T00:00:00+0553
In a scathing editorial on press freedom in India, the July 27, 2014, edition of the New York Times talked of the Indian press being under siege, calling the situation worse than the Emergency imposed on the country in 1975. “Press censorship seems to be back with a vengeance in India, this time imposed not by direct government fiat but by powerful private owners and politicians,” the editorial read.

One of the immediate provocations for the NYT editorial was the censorship of my sharp and incriminating profile of Amit Shah, the man who is now political second-in-command to Narendra Modi. The column, titled ‘A new low in Indian politics’, was written in response to Shah’s appointment as president of the ruling party. The newspaper website I wrote it for pulled off the piece, allegedly to please the political dispensation.

It has been five months since the episode, and Shah is back in the news. The lower courts have discharged the case against him, giving him a clean chit and absolving him of all crime. If appointing Shah as BJP president was a new low in Indian politics, the dismissal of his case on most frivolous grounds deals another blow to the criminal justice system in India.

To understand the seriousness of the charges against Shah, it is pertinent to look back at the criminal cases against him and try to grasp their exact significance in the present-day context.

In 2010, Shah became the first serving minister of state for home affairs in the history of independent India to be sent behind bars on charges of murder, conspiracy and running a criminal syndicate. He was indicted for the extra-judicial encounters of three individuals—Sohra­buddin Sheikh, his wife Kauserbi and, a year later, Tulsiram Prajapati, a Hindu, who was to be a key witness in the case. Sohrabuddin’s brother had filed a complaint against the Gujarat police over the killing of his brother and sister-in-law (see box). Rajnish Rai, the police officer working on the case, arrested three top cops from the state in 2007 after being convinced of their complicity. Later, the encounters were proved to be fake by the CBI too.

That very year, Modi was running for a second term as the chief minister of Gujarat. He had won the 2002 election in the backdrop of the bloody Gujarat riots, one that had etched deep polarising lines across the state on the basis of religion. Five years later, campaigning for his second term, the CM made the encounter killings his election plank.

Around this time, Modi was being projected as a Hindu leader under constant threat from jehadi forces. The spate of fake encounters from 2002-2007 did the needful to consolidate that impression. Top police officials under Shah’s leadership would hold press conferences with the bodies of alleged terrorists on display. They were shown as men out to assassinate Modi to avenge the massacre of Muslims during the Gujarat riots.

I was part of that crowd. That was when I first came face-to-face with the man who has since become one of the most powerful prime ministers of India in recent times. Wading my way through the crowd with the cameraperson, I approached Modi and asked him if his men and his minister should be shielded despite cold-blooded murder. The response was a 10-second-long cold stare which has stayed with me till this day.

Truth, they say, eventually finds a way out, and it did. In 2010, the CBI made its first arrest of Abhay Chudasama, an ips officer known to have been close to Shah and declared the Sohrabuddin encounter as fake. Post a persistent month-long investigation, I ran into what was the most incriminating evidence that the investigating agencies later used—the call records of Shah who was communicating with the officers charged with the murder of the three victims on the same days and time as they were killed.

I also managed to find my way to an internal note which was the result of an investigation by an intelligence official under the Official Secrets Act of the state. The note was incriminating. It observed, “The calls made by the minister are not part of official decorum. Their frequency is unnatural and uncommon in nature—Gujarat CID report on Amit Shah’s calls to encounter cops.” The calls were monitored by no less than P.C. Pande, the then police commissioner of Gujarat.

The case, which was earlier being investigated by state investigating agency CID, was handed over to the CBI under the direct supervision of the Supreme Court. The apex court came down heavily on the investigating officers of the Modi government, especially officer in charge Geeta Johri, and asked her to look into the larger conspiracy surrounding the encounters.

It was at this stage that my investigation became public, forcing the CBI to hasten its investigation. Within weeks of my expose, the CBI arrested Shah for being the mastermind of the encounters.

In its submission to the SC bench of Justices P. Sathasivam and B.S. Chauhan, the CBI stated that Shah headed a syndicate of senior cops, politicians, underworld thugs and businessmen—essentially an extortion racket—and that he was in cah­oots with the seniormost police officials from Gujarat, including Vanzara and Chudasama. Shah was also held a co-accused in the murder of Sohrabuddin’s innocent wife, who was allegedly sedated, raped, killed and her body burnt.

In a rather unexpected and damning ‘admission’ of his crime, Vanzara, Shah’s top cop who headed the anti-terror squad and was jailed for his role in encounter killings, wrote a letter in 2013 to the government, resigning from his services. His letter was revelatory of the criminal-political advantage the Gujarat government had taken of the fake encounters. In his letter, Vanzara wrote, “I realised that this government was not only not interested in protecting us but it also has been clandestinely making all efforts to keep me and my officers in the jail so as to save its own skin from CBI on one hand and gain political benefits on the other. It is everybody’s knowledge that this government has been reaping very rich political dividends, since last 12 years, by keeping the glow of encounter cases alive in the sky of Gujarat (sic).”

The Gujarat police claimed later that fake encounters took place because policemen wanted “name, fame and promotion”. But the manner in which the state went out of its way to provide legal assistance to the accused policemen and reinstated many of them, including Abhay Chudasama, IPS (left) raised eyebrows. Why reinstate policemen accused of fake encounters?

He further wrote, “Apprehending the arrest of political leaders of Gujarat by CBI, all efforts, legal and political, were made by this government to ensure that none of us was released on bail so as to prevent the investigation going from the hands of Gujarat CID to Union CBI.”

And continued, “I therefore, would like to categorically state in the most unequivocal words that the officers and men of Crime Branch, ATS, and Border Range, during the period of years between 2002 to 2007, simply acted and performed their duties in compliance of the conscious policy of this government....”

In an ideal world and in ideal circumstances, state home minister Shah would have been facing the consequences most criminals would for such heinous crimes but for political power and judicial misreading. In a rather contrived and flawed discharge order, a special judge from a Mumbai court on December 30 negated the statements of the most crucial witnesses in the case, casting aspersions on their motives. He has sought to dismiss the case even before the trial was yet to begin and witnesses who had given their statement against the minister to the magistrate are yet to be cross-examined.

In his judgement, the judge has decided to negate the statement of G.C. Raigarh, the man who headed state intelligence during the riots and who had stated that he was being influenced and pressurised to spare the top cops and leaders. The judgment chose instead to focus on the statements of two other top cops which favoured the minister. For their services, they have famously been rewarded post-retirement honorary jobs and rewards by the government.

The judge further dismisses the CBI’s submission of the phone calls Shah made to the cops. His order states, “If a home minister of a particular state enters in a direct dialogue with officers like the Superintendent of Police working at the ground level is not a matter of surprise, unusual or unnatural as the CBI proposes.”

What the judge conveniently forgets is that it wasn’t the CBI’s finding but of Modi and Shah’s own CID which monitored an OSA case that was later furnished by this journalist in an investigative report. Till this day, the CBI’s website lists this journalist’s work as evidence to indict the minister.

So arbitrary is the CBI court’s judgement that it castigates every witness who has deposed against the minister with illogical comments—one being that the statements look rehearsed and verbatim.

The judgement even insinuates that Sohrabuddin was a man with a crime record, as though killing a man with a criminal record in a fake encounter is perfectly justified. Here again, the judge conveniently forgets  a crucial fact: that Sohrabuddin was a henchman for the top cops in Gujarat, as the CBI itself proved. And at no point in the judgement does the judge spare a thought for the unintended victim of the encounter—Kauserbi. At no point does he shame the cops for murdering a woman who was returning after offering special prayers for a child of her own.

Nor does the judge talk of the sting operation by one of the accused officers which suggests police officer N.V. Chauhan, a co-accused, had spoken of Vanzara getting calls from Shah. This while both were keeping a watch on Kauserbi who had been kidnapped and confined in a bungalow. She was allegedly administered a powerful dose of anaesthetic after which she was raped, her body burnt and thrown in a river.

Today, as the fake encounter cases against Shah stand discharged, the man who is now the president of the ruling party and who takes important strategic decisions for the country along with the prime minister, the judgement seems to have proved the hegemony of power over justice.

Two weeks ago, as I paced around at the Mumbai airport for my flight to Delhi, I found myself staring at Abhay Chudasama lounging at the bar with a friend. Vanzara is out on bail too. Granted bail for the Sohrabuddin case in December, for Ishrat Jahan in February. Yes, the promised acchhe din seem to have arrived!

(The author steered the coverage of the investigation for Tehelka that led to Amit Shah’s arrest.)

The Man Who Would Not Bend