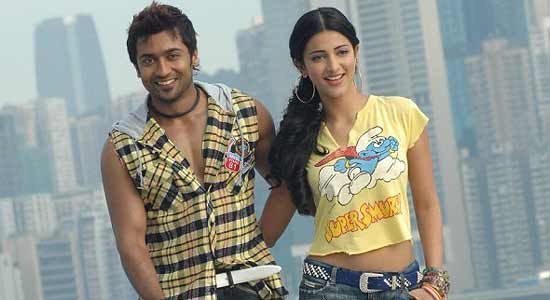 A.R. Murugadoss’s preoccupation with memory (Ghajini) and its many mechanics manifests in 7aum Arivu (The Seventh Sense). Part-historical epic, part-fiction, and loaded with action sequences inspired by Indian and Chinese martial arts (kalari and kung fu), the film comes alive in a beautiful light (courtesy, Ravi K. Chandran). But, light can’t make up for logic. Genetic engineering student Subha Srinivasan (Shruti Haasan) is researching how to activate genetic memory and harness the potential and power of legendary Buddhist monk, Bodhidharma (Suriya). Traditionally credited with transmitting Zen and beginning the physical training of Shaolin, Bodhidharma—Tamilians, pop your collar—was born a Pallava prince in Kanchipuram. Subha’s subject, whose DNA matches most closely to Bodhidharma, is circus artiste Aravind (Suriya). To put a spoke in her research wheel, China, no less, launches Operation Red (a virus that will spread like wild fire) and sends Dong Lee (Johnny Tri Nguyen), a trained Shaolin monk, to kill her. The rest, which by the way is a little more than the second half, is not quite history. After many songs and set action pieces, Bodhidharma’s powers seep into Aravind’s bloodstream, and both Operation Red and Dong Lee are destroyed. The film ends with Aravind reiterating the need to celebrate our history. Right. Explains why the first twenty or so minutes with Bodhidharma and his antics are really the best part.