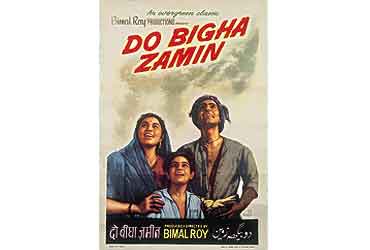 The epitome of the socialist-humanist Indian cinema of the 1950s, Do Bigha Zamin marries our traditional melodramatic elements of storytelling with the neo-realism of Vittorio De Sica and the idealism Roy derived from the ipta. This seemingly simple film is a dark parable about an exploitative, degrading society caught in the cusp of modernity. With its focus on migrant peasantry, the faceless dispossessed of our times, it dramatises the oppositions between the agrarian and the industrial economy. The unfolding of the protagonist’s life also maps a larger violence: of how a refugee from a decimated village feeds the urban underclass.

Shambhu (Sahni) needs to repay the zamindar’s debt to reclaim his two acres of land. Unable to break the cycle of penury in the village, he with son Kanahiyya (Ratan Kumar) moves to Calcutta where he becomes a rickshaw-puller. But the disillusionment gets worse, the hardships more epic. The film closes with the death of his wife Paro (Nirupa Roy) and Shambhu finally deciding to return home, only to find a factory has come up on his treasured piece of land.

Do Bigha is best remembered for Sahni’s superlative, naturalistic essay—he lived the life of a Calcutta rickshaw-wallah to prepare for his role. The thematic essence of the film is captured in the unforgettable rickshaw-against-horse-carriage sequence. Its impact owes much to Hrishikesh Mukherjee’s "shock-cut" editing techniques. The race is emblematic of how the city reduces a hard-working villager to the status of an animal. Jagdeep, a child artist then, is a shoeshine boy who keeps humming Awara hoon—Roy’s assertion that cinema could be a possible escape from the drudgery of diminished lives.