As bus rides go, this one, through Gujarat, was monochromatic 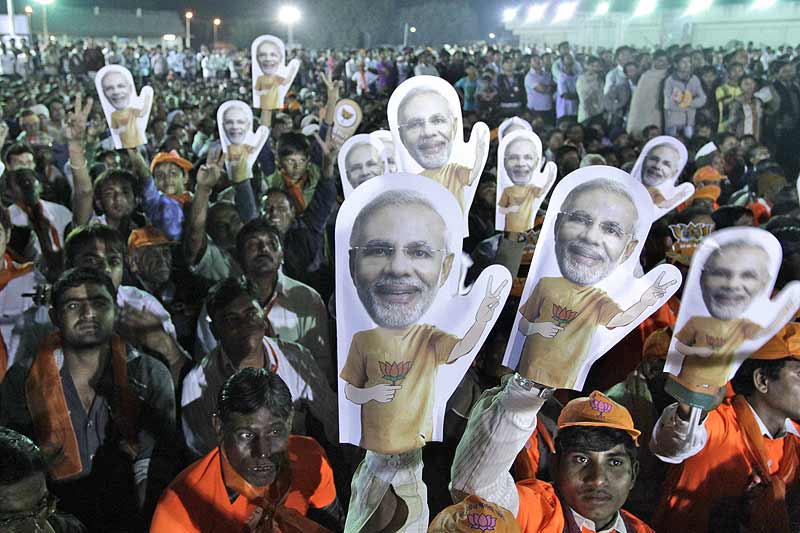 The first assembly election in Gujarat after delimitation of constituencies will see more parties, more rebels and more candidates in the fray

As the passengers settle down on the 8.30 am Gujarat State Road Transport Corporation (GSRTC) bus from Ahmedabad to Porbandar, the driver fiddles with his mobile. One prays it will be his last call on this journey. It is election season, and my bus yatra will sample what a random lot of people think about Gujarat, its controversial chief minister, Narendra Modi, and his brand of politics. “We’ll be reaching Porbandar at 6.15 pm,” the ageing conductor, Dikubhai Pathak, predicts, handing me a Rs 194 ticket as he reels off the places we will touch on our 438-km journey. He’s only 15 minutes off mark. When we reached Porbandar, it was 6 in the evening.

Getting out of Ahmedabad takes time. After all, Ahmedabad is a larger city than Chennai today. Traffic is heavy. As our bus crosses the Sabarmati, we can see fresh green vegetables being sold on the footpaths. We stop at various points in the city to pick up passengers before heading on to the highway. Usually, reporting an election means you hire a car (if the office is paying), and then select key areas and talk to the largest number of people possible about the widest range of issues. Reporters who come back with the best assessments are the ones who frequently stop to ask questions, drink endless cups of tea with people, keep an ear tuned to political gossip.

This time it’s the bus for me. Rather than you going to the electorate, the electorate is with you. It’s new and different. A camera around your neck, even in television times, is helpful; people know you might be a reporter. Sitting across me is a middle-aged gentleman, clutching a small, strappy bag. By way of an opener, I ask him where he’s going. Sanand, he tells me. “Tata Nano, you know?” Arvind Shah sells masalas for a living. He’s on the way for a market visit with his distributor. So, how has his life improved in the last five years? “Nothing negative has happened in the last five years. Zameen ka daam kitna barh gaya hai (The price of land has gone up so much). Poore vyapari Modi ko vote denge. Dus saal se shaanti hai. (Merchants and businesspeople will all vote for Modi. It’s been peaceful for the last 10 years.)” Has everyone forgotten about the massacre of Muslims that followed the Godhra train killings in 2002, just after Modi became chief minister? “Yes, they have forgotten. They have moved on.”

Outside, one can see impressive blobs of concrete bobbing up from what were once fields. Porsche, Renault, Maruti, Tata and Jaguar—all these and more appear to be an integral part of the landscape. The pace of construction appears to be scorching, the distinction between urban and rural is being erased. Flats, low and high, are coming up. They are everywhere: in and around Rajkot, in Gondal, in Jetpur, in Kutiyana. And not to forget mandirs—like malls and glass-fronted shops, they, too, are sprouting in many places.

“Modi will first become CM. Then he can teach those Mohammedans in Delhi a lesson.” This is said matter-of-factly, without emotion.

Sitting a little distance away from me is a young woman, alternately taking calls on her mobile and listening to music. She seems to be a regular, making use of her time as only those who have a routine do. The seat next to her is vacant. After settling down next to her, I introduce myself as a reporter from Delhi, who would like to ask her a few questions. She is cool, confident. Go ahead, she says. Turns out she’s a primary school-teacher, and she is a regular. Her name is Prakruti. She is dressed in a salwar-kameez, her face is wrapped up in a dupatta. Prakruti believes that Modi will be the next chief minister. “Usne road banaya. Is road ko four-lane kiya. Modi hi jeetega (He has laid roads, made this road a four-laner. He alone will win),” she says. So, are you voting for Modi or the BJP? “Normally, I would say party, but in the case of Gujarat, Modi is the party. That’s what has happened here.” So, what has changed in the last five years, personally, for her? “I got a government job as a primary school-teacher two and a half years ago. My life changed for the better.” She has an MA and a BEd and earns Rs 5,200 a month. Can’t she earn more in Ahmedabad, where her husband works for a bank? “Yes, I can. But this is a government job, after all,” she says. A secure job in uncertain times. Her salary has been fixed for five years—no increments—and Prakruti is not happy about that. “Teachers have taken the government to the high court on the salary issue. But the Gujarat government has gone in appeal to the Supreme Court.” On the riots of 2002, she doesn’t have much to say. “I was in Std XII then. I don’t really remember what happened.” 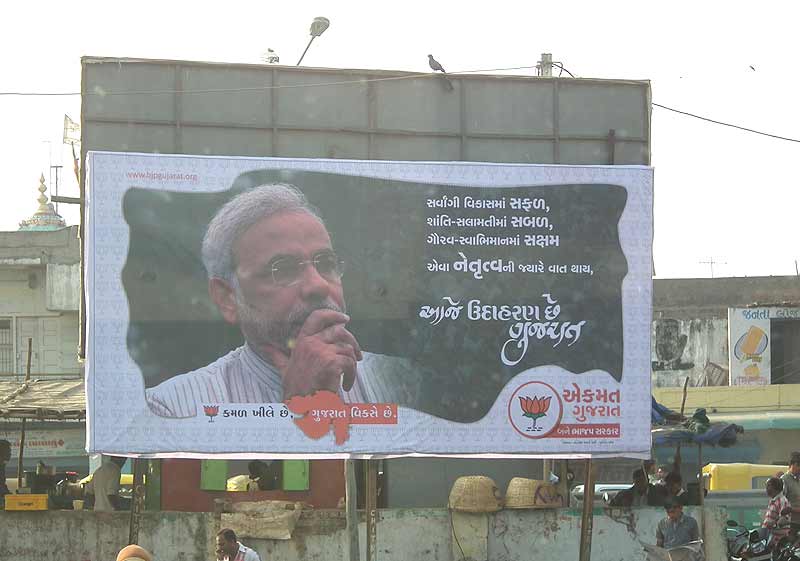 At the bus stations which, by the way, could win any Indian smelly loo contest, there are a couple of hoardings displaying figures of Modi, the Congress hand and the new Gujarat Parivartan Party of Keshbubhai Patel. Other than the few hoardings, and a lone Nationalist Congress Party (NCP) cycle rally we see along the way, you could forget there’s an election happening in Gujarat. My conversation with Chhote Lal Gupta, an Ahmadabad-based businessman who deals in ball-bearings, turns into a seminar about the rotten (what else?) state of politics in the country, with Madubhai Pathak, who retired from the National Textile Corporation, intervening off and on.

“Jhooth bolo or aage badho (Lie and move ahead in life),” Gupta, who hails from a village in Gorakhpur but has been living in Gujarat for the past 28 years, declares. That’s the way ahead in politics. Both Gupta (from Ahmedabad) and Pathak (who lives in Rajkot) believe that Modi and the BJP are on a weaker wicket today than at the time of the 2007 elections. Former chief minister Keshubhai Patel, they say, with a couple of others nodding in agreement, will cut into the votes of the BJP. Not of the Congress? No, no, they reply. The new Gujarat Parivartan Party will only cut the votes of the ruling party. And, this is their opinion, could help the Congress. I turn the subject to the 2002 killings. Has everyone forgotten? Can you really forget if a brother or a sister, father or a daughter, wife or a husband has been killed? Pathak, bespectacled and wearing a yellow khadi shirt and brown trousers, believes that people don’t forget such things. Gupta articulates a similar sentiment. We move on to other subjects. Pathak asks me how Sheila Dikshit is doing in Delhi and why she keeps winning election after election. Is it because the BJP doesn’t have any leaders in Delhi? Corruption is clearly on their minds and Pathak wants to know whether Arvind Kejriwal’s party will cut into the Congress vote in Delhi. He also believes that Anna Hazare did a good job and pushed the central government on to the backfoot.

After bidding goodbye to Pathak and Gupta, I turn to a young man wearing a diamond ring in his left ear. Gorakhbhai, who is in “service”, tells me that it’s only a matter of time before Modi moves to national politics. Will he move immediately if the BJP returns to power? “No, after a while—he will first become chief minister. Then he can teach those Mohammedans a lesson in Delhi.” It’s said in a very matter of fact way, without any anger or emotion. A simple, chilling statement of fact, which makes me sit up in my seat. We talk a little more about the state of the roads, and how money is made in their repair, and then Gorakhbhai, too, gets off the bus.

Our genial conductor, Dikubhai, joins me. He’s from Porbandar and used to do the night runs until health reasons forced him to stick to day trips. “In Porbandar and Kutiyana seats, it’s a close battle with the Congress, but Modi and his party will get around 100 seats (in a house of 182).” My mind returns to what Gorakhbhai said about his “expectations” from Modi in Delhi. It also meanders to an Ahmedabad journalist friend’s remark that Gujarat hasn’t had a single Muslim minister since the BJP took power in 1998—a long, 14-year period. But, my journey has come to an end. One can see the colourful, newish Porbandar airport from the highway. Am entering a big town, where once Mahatma Gandhi was born and is now sprinkled liberally with glitzy shops selling mobile phones. From behind his trademark glasses, Gandhi would have seen a very different Porbandar, Gujarat and India.

A Half-Turn In History