The judge is off to the US, his lawyer still won't acquiesce. Result: another extension. 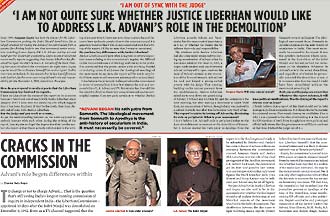 outlookindia.com
-0001-11-30T00:00:00+05:53
Ten days before his 41st extension expired on October 31, Justice M.S. Liberhan, who heads the commission probing the Babri Masjid demolition, took off for the United States on a month-long vacation. With the panel's deadline running out and its final report yet to be completed, the Union home ministry was left with no choice but to grant the judge yet another extension. December 31 is the new deadline set for the commission to finish the task it embarked on 15 years ago.

So how close is Liberhan to giving the final touches to the report? Contrary to media speculation that it's ready, Outlook has learnt from sources close to the commission that it is still not complete and "will require considerable reworking". Towards this end, the judge has been making frantic efforts to win over the cooperation of the counsel of the commission, Anupam Gupta. The latter has virtually dissociated himself from the writing of the report due to major differences with the judge as reported first by Outlook (September 17, '07).

In fact, sources close to the commission say that despite Justice Liberhan's best efforts, Gupta continues to be obdurate and is unwilling to rework or edit sections of the report drafted by the judge. The gulf between the two, which now appears "unbridgeable", owes to fundamental differences over how the commission should view BJP leader L.K. Advani's role in the Ayodhya movement which culminated in the demolition of the masjid on December 6, 1991. Liberhan does not wish to be harsh on Advani, while Gupta believes that the BJP leader who spearheaded the movement should not be let off lightly. In fact, Gupta is extremely apprehensive about the likelihood of the report being a "complete washout". Which is why he has not even started work on the drafts sent to him in the last two months.

Sources close to the judge say that this time around Justice Liberhan was uncharacteristically nonchalant about meeting the October 31 deadline and seemed to have assumed that he would get another extension. This is all the more curious considering the judge has of late stressed his eagerness to complete the report. This in turn has led to speculation that this time the government may not have been too keen to see the final report in a hurry. One, in the pre-election kind of sentiment prevailing now, it ill suits the Congress to grant the BJP a strong polarising issue. Also, it is trying to bring about a political consensus on the nuclear deal by roping in all parties, including the BJP.

When contacted by Outlook, officials in the Union home ministry said they had waited for Liberhan to submit his report on October 31, but had to extend the deadline yet again for two months, to give the commission time to finalise its report. "The judge is abroad on some personal work, the extension had to be given," said a senior official. On whether this would lead to yet another extension going by the past record, he said the ministry is hoping the commission will comply with the December 31 deadline.

Justice Liberhan will be back at work in the last week of November—having got a record 42nd extension. It remains to be seen if the one-man commission, which has already cost the exchequer Rs 7 crore, can finalise its report before December 31. Even after that, the report will have to go for printing before being tabled in Parliament next year.