The crux lies in the abrupt twist in the tale which hastily surfaces in the last 10 minutes of the film. 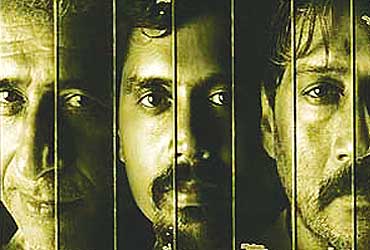 The crux of 3 Deewarein lies in the abrupt twist in the tale which hastily surfaces in the last 10 minutes of the film. This turn, the filmmakers' obvious manipulation of the audience's expectations, might make 3 Deewarein a novel and enjoyable attempt at story-telling. But it is also a let down. Perhaps because the coincidences don't seem to develop naturally out of the narrative—they seem too forced, too pat and much too clever. Kukunoor mixes two different genres of filmmaking in a manner that doesn't work as one cinematic whole. Instead, the 3 Deewarein that you finish with seems entirely unrelated to the 3 Deewarein you had begun viewing 120 minutes ago, as though it was two different films forcibly rolled into one.

The film starts off as a quasi-realistic, sociological...