Grand intentions are fine, but can the Centre spring the resources? Also, are these plans viable? 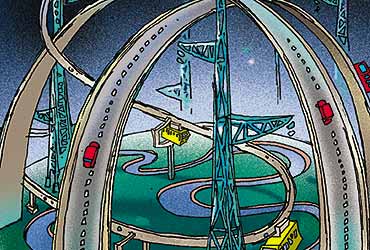 outlookindia.com
-0001-11-30T00:00:00+0553
As befits a poet-prime minister, Atal Behari Vajpayee has a dream. A dream to transform India into a developed economy by 2020. A dream to build an India where people have the best of facilities available in the developed world. To translate this into reality, he's personally pushed through mega projects which, if they happen, will transfigure India's landscape in the coming decades.

Picture this. By 2008, world-class expressways connecting all the major cities and criss-crossing the country, cutting down travel time by around 50 per cent. Within a decade, an all-India grid to solve the problems of power shortages by diverting power from surplus states to deficit ones. By 2016, all Indian rivers connected to tackle the twin menace of floods and drought. The Sky Bus Metro project to take the load off our city roads. And the proposed investments in all: a stunning Rs 7,00,000 crore.

But as the government shifts into election mode, it seems some of these dream projects will remain just that—dreams. In the next 12-15 months, in a bid to woo voters, the ruling regime is likely to divert funds to short-term welfare projects, as opposed to those that will take years. Also, if the bjp is unable to return to power, future governments may decide to put them in deep freeze. Finally, there's also the issue that a few of the projects do look unviable or, as some economists put it, 'plain impossible'.

Already, fund problems are cropping up. Recently, the finance ministry snubbed the Planning Commission's demands for higher budgetary outlays since revenue collections could fall short this year. Admits B.C. Khanduri, minister for road transport and highways, who's aggressively pushing through the Rs 54,000-crore, 13,000-km highway project: "It is an area of concern. For example, to maintain highways, we are getting less than 60 per cent of what's required."

Khanduri has managed a Rs 20,000-crore commitment from the World Bank and the FM's backing for an equal amount (to be raised through a cess on petroleum products). However, there are several problems even though the roads ministry claims it will be completed on schedule. Khanduri agrees that "land acquisition, shifting of utilities, tree-cutting and quarrying are proving to be major hurdles". Despite the ministry's best efforts, land has not been made available on some stretches for as long as two years now. The new land acquisition law for highways, passed by Parliament last winter session, may now change this scenario.

Even if acquisitions become easier, the government still needs to grapple with the compensation to be paid to owners. Explains a senior bureaucrat in the ministry: "The states do not have the machinery to handle compensation of this magnitude. Not only are they unable to determine the extent of compensation, the distribution mechanism is also inadequate." Add to this the fact that work had to be stopped on a few stretches for six months due to deteriorating law and order. In Bihar, construction sites have been ransacked several times in recent months.

The National Powergrid Project, being implemented by the Powergrid Corporation, estimated to cost Rs 80,000 crore and scheduled to be completed by 2012, is expected to solve power problems in India. While work has progressed slowly and a few major routes have been linked by high-voltage direct current lines, some experts feel that a national grid cannot take shape without some key issues in the power sector being sorted out. Says Bibek Debroy, director, Rajiv Gandhi Institute for Contemporary Studies: "Power sector reforms have gone awry. All attempts to reform the distribution system have failed." Clearing this mess would imply increasing user charges, reducing distribution losses and forcing farmers to pay—all politically sensitive issues.

But will the national grid solve India's power problems? Says a senior manager in a private power firm: "No one denies the fact that the grid will help alleviate shortages by evacuating power from surplus to deficient areas. But you also need good grid management to prevent it from collapsing. Today grids collapse because deficient areas draw too much power. These issues have to be resolved."

These problems can be surmounted. What do you do with projects that look impractical to begin with? For instance, the most grandiose Rs 5,60,000-crore river-linking project.

The plan envisages linking all the major rivers to achieve inter-basin transfer of water for controlling flood and drought. For example, 1,500 cu m of water will be transferred from the Ganges to the southern Cauvery basin every second during floods through a chain of canals linking the Mahanadi, Cauvery and Pennar, and the Ganges and the Brahmaputra will be linked to lessen the impact of floods in the latter river. The National Water Development Agency's (NWDA) pre-feasibility study has identified 30 inter-basin water transfer links. Of this, 14 are under the Himalayan component and 16 under the peninsular component.

A task force headed by ex-power minister Suresh Prabhu is to conduct detailed feasibility studies. A final report is expected by 2006. Is the project a pipe dream? Feels Debroy: "I'm extremely sceptical about the knitting together of the rivers. There are crucial inter-state and international and environmental issues involved." Adds another expert: "What is its utility value when many Indian rivers don't have water for a major part of the year? We haven't been able to solve water-sharing issues between two states. Here we are looking at a national sharing of rivers."

Well, suppose the country's policymakers are able to resolve these thorny issues. Can the government find the money to fund it? Prabhu doesn't see a problem: "The resources required will be less than 1 per cent of the country's gdp. The outlay may be huge but the entire amount is not required upfront."

Then, there's the question of energy, required to lift the waters to make them flow into the network of canals. Water may have to be lifted to a considerable height to transport it to the Deccan plateau—this itself will require 7,000-10,000 MW of power. That's nearly 30 per cent of the entire power generation in the northern region.

Prabhu, however, is still willing to give it a shot. "There are problems but at the macro level it is doable. The task force will look at all micro issues and problems before taking a decision. We will not undertake any link where the loss will outweigh the benefits, whether it is economic, ecological or social."

However, the cost-benefit ratio is rosier in a plan proposed by the Konkan Railway Corporation to lift congestion from city roads. Suspended trolley buses, similar to Singapore's Light Rapid Transport System are the answer.

Three state governments—Maharashtra, Kerala and Goa—are considering small pilot projects which, if successful, may be extended to all major cities in India. The estimated initial investment is of Rs 550 crore for the Andheri-Ghatkopar corridor in Mumbai, Rs 798 crore for Kochi and Rs 550 crore for a 10-km stretch in Goa. The only snag here could be in terms of the technology, which is untested.

So will the PM's dreams turn to reality? Says a cynical power expert: "There are thousands of foundation stones littered across the country of projects which never took off. Now there'll be a few more." Economist Shubhashis Gangopadhyay is a bit more optimistic: "These projects have to be made feasible. It will go a long way in integrating the country into one economy...simply by establishing physical connectivity. The fact that the tenure of these projects goes beyond the term of the current government is also not a problem; indeed, it's a boon. It commits all future governments to go through with these exercises till completion." Well, maybe.

The Magic Club of Six