The big question at that time was, "After Nehru, who?"

B.G. Verghese, Veteran Journalist and Editor
The big question at that time was, "After Nehru, who?" Morarji Desai and Lal Bahadur Shastri were both being discussed as possible successors. Nehru always denied grooming Indira for political power, but she did serve as Congress president in 1959. The post had a one-year term limit, and she made way for Neelam Sanjeeva Reddy in 1960. 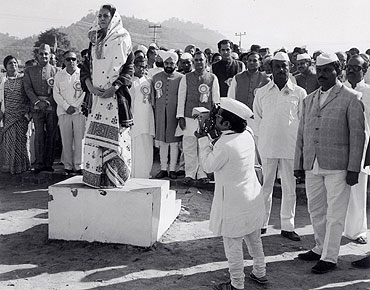 The pedestal: Indira Gandhi at a public meeting

Intra-party democracy was very strong, with provincial leaders getting a lot of importance. Regional Congress leaders with their own power bases, such as Atulya Ghosh in Bengal, K. Kamaraj in Tamil Nadu and S.K. Patil in Bombay would later go on to form the ‘Syndicate’, deciding the fate of the party after Nehru’s death, and until 1969. In those days, Parliament was much more the focus of attention than it is today, and powerful orators such as C. Rajagopalachari with his Swatantra Party, and the young Atal Behari Vajpayee were listened to with great attention.