Those were radio days.

Amita Malik, Radio and TV Critic
Those were radio days. In 1960, All India Radio was the only truly national organisation that reached and touched everybody. Ravi Shankar even composed the signature tune for AIR. The national programmes produced great concerts by great musicians. Every other Saturday, Hindustani and Carnatic musicians would play jugalbandis, bridging a gap that had existed for many long years. 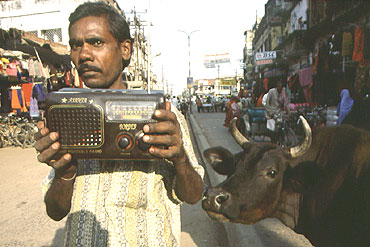 The then IB minister, B.V. Keskar, restricted the playing of Hindi film music on AIR, so then Radio Ceylon swamped the airwaves with Binaca Geetmala—a hit parade of film songs—broadcast by Hameed and Ameen Sayani. Keskar had to allow film music back and the Vividh Bharati channel was created. TV was some years away—although the first experimental broadcast of Doordarshan took place in 1959, regular service only started by 1965. By 1967, TV was important enough that I hosted a show on it with Marlon Brando and Satyajit Ray.