Empire? No, that was just a typo in the terms of the contract 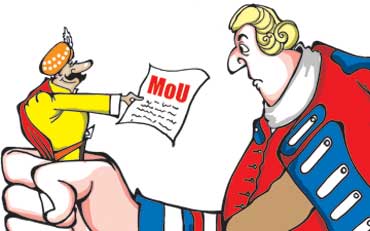 outlookindia.com
-0001-11-30T00:00:00+0553
It's getting a bit worrying that year after year, we continue to make the same mistake—this celebration of what has so unfortunately come to be called Independence Day. Independence from British rule, they say. Silly thought, when the fact is that India never was colonised in the first place. All that ever happened was that various Indians alike outsourced management of the country to a British firm for a period. Once the job was done, we sacked them. It really is that simple.

How then, you ask, can every historian ever in India, Britain and elsewhere have been wrong. Well, ask them. But my guess is that they needed to agree on a language and then find enough disagreement, so they could get published and get university jobs. They then exploited their position to set exam papers we needed to pass so that we could get jobs. And so the spiral of lies winds on. History should never be left to employed historians; they have vested interest in the past. That project should be awarded to our captains of industry; if they can manage the future, why not the past.

In the hands of historians, truth has been a victim, and so have we. Think of all the damage their employment-led myths have done, of all the complexes they have induced. That we became slaves because we could not unite. Not unite? We were united as few ever have been. See how one part of the country after another quickly enough came to outsource to the same firm. Without even talking about it, we agreed; we achieved consensus without consultation.

And slaves? Surely you cannot call in managers and then become their slaves. No doubt you would end up doing many things the managers say, it would be wasteful not to. You can't call in Accenture, or, say, J.P. Morgan, to sort out your company, and then not follow instructions, only because if you do, someone will call you a slave. There is still so much of such backward thinking about.

And then there is this, that the problem with the British was that they were foreigners. But were they? The British launched their project in Bengal, and anyone who knows a true Bengali knows the British and the Bengali would have met as brothers separated at birth. And still we fail to celebrate their reunion. Why have we lost our family values?

The difference between the English gentleman and the bhadralok babu cannot survive past first glance. There are some surface differences arising from circumstance such as location, but an essential oneness shines through. Take their obsession with fish. We are what we eat, every lifestyle guru tells us, and if we pay them to tell that to us, we can't be wrong either. It is elementary (and not just alimentary); therefore that if you eat one, you are one. But consider, too, the inner kinship among the two of the upstairs kind: the unselfconscious certainty of mind superiority, the grace with which you accept responsibility for being progressive for everyone else's sake, the ease with which you can talk yourself out of trouble and others into it.

And surely this Bengali reunion with the long-lost brother with the MBA—and with that useful specialisation in international commerce—was a godsend because India Ltd needed sorting out. We had developed a system of inheritance of management, and the next generation thought nothing of bumping off an inconvenient brother or two who could be in the way, or imprisoning the last manager just in case he came back from retirement.

You will always find resistance to change when you call in consultants who are given contracts as managers. And so, unfortunately, some otherwise decent managers, such as one Mr T. Sultan, had to be removed by security because they would not accept dismissal orders. Since Mr Sultan amused himself by watching a cranked up tiger model eating a Brit, you might agree this made him an interesting man, but not manager material. Because that was hardly a cost-effective way of expressing displeasure with an advancing manager with a hostile takeover bid in hand. And these things will happen in the interest of consolidation. Ask Mittal.

And besides Mr Sultan there was that unfortunate strike in 1857 by the All India Beef and Pork Union. Except at the time of the strike, this was not the most united of unions. And it was not 'all India' either, but never mind. Union leaders do not necessarily make good managers, even the night shift porter at J.P. Morgan can tell you that. The new managers got rid of this lot and relocated the last of the lot, one Mr B.S. Zafar, to Rangoon, where he found a new calling as full-time poet. 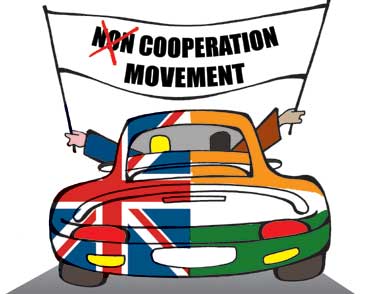 True, about a third of India ruled by maharajahs never did outsource, but no, you wouldn't want a company run by a boss who declared holiday the day his favourite dog mated, or where a thousand flowers bloomed only for Mr Maharajah to deflower them.

Sure, there were some pretty lousy and corrupt managers from time to time from that cadre. Chap called Dalhousie was caught smuggling diamonds to head office, and it's unfortunate that headquarters did not proceed against him, as they did against that delinquent Dyer, though he never did face the murder charge. And questions were raised about conduct with the Begums of Avadh. But in all this too there were management lessons; to be forever courteous unless it interferes with profitability, and to call in security only when you absolutely have to.

And it's in this new management culture that we really got our money's worth. The new managers sorted out the whole appointments procedure. Once the last of managers from headquarters left, the top management was no longer something to be inherited, though there have been some suspect hangovers of old ways. Everyone became a stakeholder in the company. And we found infrastructural gains, even if they weren't then fond of such long words; from tangas we stepped into trains, from pigeons to posts and telegraph. They got us a civil, now 'administrative' service, to serve us. That these servants sometimes act like masters is another matter, some things we must sort out on our own.

Our appointed managers were so much better than many others in Europe who stayed home and kept to themselves. And we didn't even have to go headhunting for them, they just turned up at the door and offered their services so very insistently, and then went for expansion so aggressively. True, they disregarded many notices to finally leave. So finally, we had one Mr M.K. Gandhi who trained at their headquarters to use some of their own ways of getting rid of them. And another of our chaps by the name of J.L. Nehru trained at their headquarters to take over management after also doing his bit to get rid of them. As they might have said at headquarters, quite extraordinary.

Today a couple of million from India have taken positions at the old head office. They have now twice their per capita share of the now downsized Britain Plc, and chaps from India now own the biggest British steelmaking, and flagship car companies. So now they outsource to us. Between us, we began to globalise generations before someone created that word.

They continue to globalise, but aren't quite management consultants on the loose the way they were then. They stick mostly to their own office back home. And let's not worry too much about contracts that are now over. They came in when we invited them, they left not long after we firmly asked them to. This is the stuff of employment, not empire. We do get our words mixed up, never mind, it wasn't our language to begin with. And talking language, it does seem (and this will take only minor changes to our annual stationery) that Independence Day should be celebrated now as Interdependence Day.

We might even be grateful to them for overstaying, and inducing us to sack them rather than go the way of decent departure. We appointed the British firm individually, and sacked them collectively, and in the collective sacking we found, and founded, our own company. They taught us the business of sacking. By now we've become quite good at sacking managers actually.