They'd play ugly and win, than fight and lose 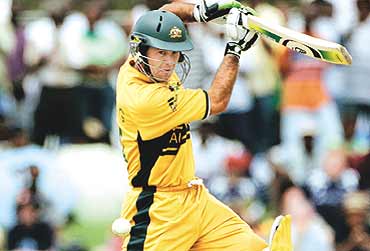 outlookindia.com
-0001-11-30T00:00:00+0553
As every expert worth his salt—yours truly included—has been saying ad nauseam, this is a wide open World Cup. That would automatically appear to suggest that Australia's chances of pulling off a hat-trick of World Cup final wins are slim. While recent events justify that view, particularly considering the absence of Brett Lee and Andrew Symonds, it would obviously be foolish to ignore the defending champions altogether.

One of the best features of this Australian team has been their mental strength. They have established their reputation as one of the game's fiercest competitors, forever up for a challenge. Indeed, they're a nation of competitors; over-achievement in sport is encouraged from an early age.

Talking about this team last year, I recall writing that because of the small number of first-class teams in Australian cricket—six, to be precise—simply finding a place in the national squad often requires more hard work and determination than playing at the international level. And if you are a leg spinner unfortunate enough to be playing for Victoria, you stand no ruddy chance. You might as well be playing rules football or move to another state to be noticed.

But I digress. The Australians set such great store by winning in sport because they believe it is a character-building exercise apart, of course, from being fun. Having been brought up in the old Yorkshire way, I can certainly empathise with that ethic. It is the reason why Australia has bred so many champions in sport—any sport. From Rod Laver to Ian Thorpe to Greg Norman, there has been a steady stream of winners from Down Under.

So this Australian team had better shape up. If they go home from the Caribbean even as honourable runners-up, there won't be a soul to welcome them at the airport. And I am not even going to begin on the clobbering their media will hand out to the team. That is the nature of the beast—it is not interested in finishing second. Think back to when India made the final in 2003—and played their worst game of the tournament. They batted and bowled like lemons, and were feted as heroes at home because they had at least reached the final.

Well, the Australians would rather play ugly and win rather than put up a marvellous fight and lose. Honourable losers? No one gives a toss!

The kangaroos are wounded. They have fire in their belly, and are hurting from their losses to England and New Zealand. The CB Series defeat against England must have hurt more than the others, because for three months, the Poms were being murdered, and then suddenly, in an act of smash-and-grab daylight robbery, they had sneaked the tournament from right under Aussie noses. So the Australians are collectively looking for revenge. And in their unity lies their strength. As individuals, I don't think they are particularly far ahead of a lot of other international players. But often their collective spirit takes them through.

They also appear to have learned a few lessons from their recent reverses. If you have noticed the tone of their recent press conferences, you will realise they are lying low, quite unlike their normal behaviour at the start of a tournament as big as this. For one thing, swaggerers-in-chief Matthew Hayden and Glenn McGrath have been strangely silent about what they will do to everybody, even Ponting has been guarding his words, the spat with Sunny Gavaskar notwithstanding. You have to make some allowances for Ponting. He's an Australian, so constitutionally incapable of backing down in a fight, and Sunny started it.

Anyhow, Ponting is likely to be the fulcrum of the team in the West Indies in the absence of Symonds. The Aussies' strength no doubt will be their batting, which means the top three must fire. That includes Adam Gilchrist, who hasn't really been the destroyer up at the top ever since England began bowling round the wicket to him in 2005, a tactic other teams gleefully adopted. Most left-handers dislike being bowled to thus, and Gilchrist has to get to grips with this problem if he is to resume his single-handed destruction of bowling attacks. His footwork has always been limited, and though he more than makes up with fantastic hand-eye coordination, bowlers have begun finding him out, particularly in conditions that encourage swing.

Alongside, Hayden must find consistent form, as must Michael Hussey. I'm not expecting miracles from McGrath either, and he'll probably be efficient at best. Ultimately, the success of Australia will rest on their much-vaunted mental resilience, and on the batting form of the top three.