The Maharatna public sector major Oil and Natural Gas Corporation Ltd’s (ONGC) intervention in the Island of Rameshwaram to manage solid waste management has transformed the lives of people in this place famous for seashore temple, Swami Vivekananda's visit and being birth place of late President A P J Abdul Kalam.
It has not only helped them to keep their houses clean but also this district in Tamil Nadu. ONGC with a market capitalization of about Rs 2,02,839.00 crore is a responsible corporate leader. It continues in its quest to make positive, tangible difference in the lives of the vulnerable and disadvantaged, especially in and around its operational areas. With a business paradigm that is based on an interconnected vision - of people's welfare, societal growth and environmental conservation, ONGC with its Corporate Social Responsibility (CSR) activities continues to cater to the developmental needs across the country. CSR has emerged in ONGC as a vital tool for social value creation with a triple bottom line approach - People, Planet and Profit. The approach is to create a positive impact on society, shared value for business and communities and involving maximum stakeholder participation. 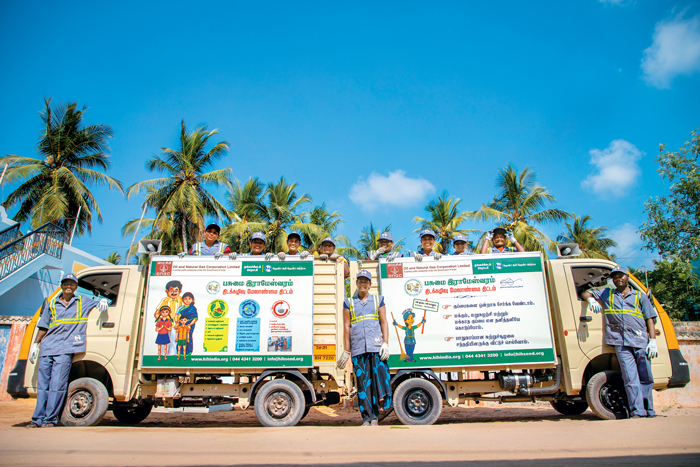 ONGC provided financial help to HIH in Rameshwaram & Tangachimadam village to purchase three goods auto. It is a light motor vehicle fitted with a speaker system.

As part of ONGC's CSR, under its programmes for promoting preventive health care and sanitation, the PSU major has aligned with the initiative- -The ‘Green Rameshwaram’ project initiated by late President Dr.A P. J Abdul Kalam for solid waste management in the district. Today, the residents of the municipality vouch that due to ONGC's efforts residents are benefitted by reduction of various diseases like malaria and dengue in the area. The project is implemented jointly by Hand in Hand (HIH) an NGO and the Ramanathapuram Municipality. It is in line with ONGC’s CSR approach of maximum stakeholders’ participation. 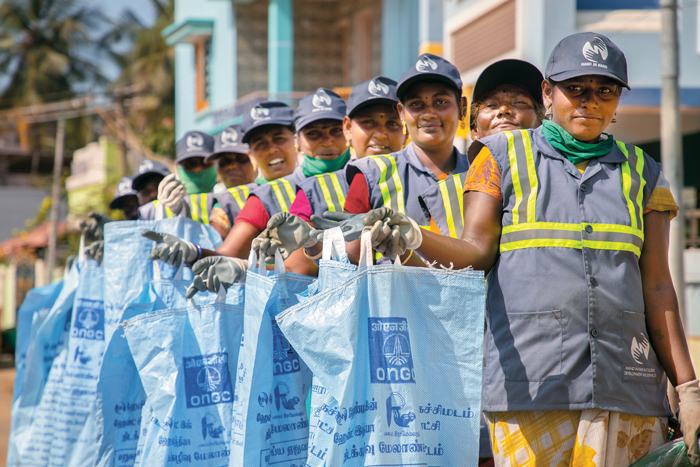 Teaching the importance of segregating solid and wet waste. Supporting it with a smile and collection

ONGC extended funds to HIH under this project which also helped HIH to purchase four goods auto (light motor vehicles fitted with a speaker system) and construct a compost making shed. “With help of ONGC’s vehicles and compost making shed, we have been able to bring the behavioural change amongst the residents through intensive door to door campaign, that eventually resulted in door to door collection each day, as against once a week earlier by the local authorities,” says K Y Babu, Deputy General Manager (Environment) HIH. Initially, ONGC took responsibility of four wards, covering 3000 households in Rameshwaram to support HIH. However, based on the success and the public appreciation, the whole Municipality was handed over to the HIH by District Authorities. 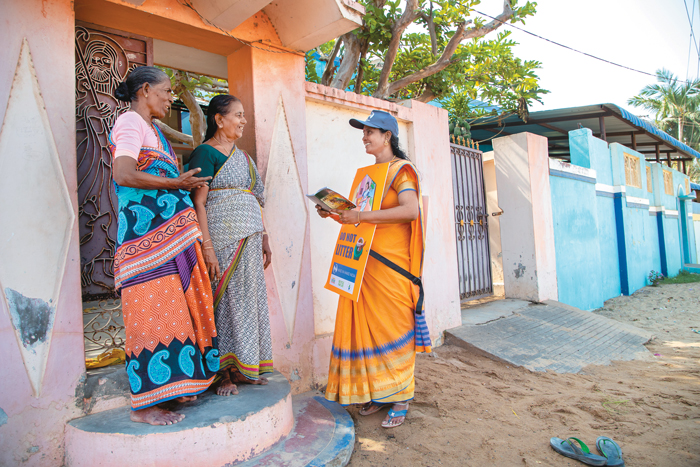 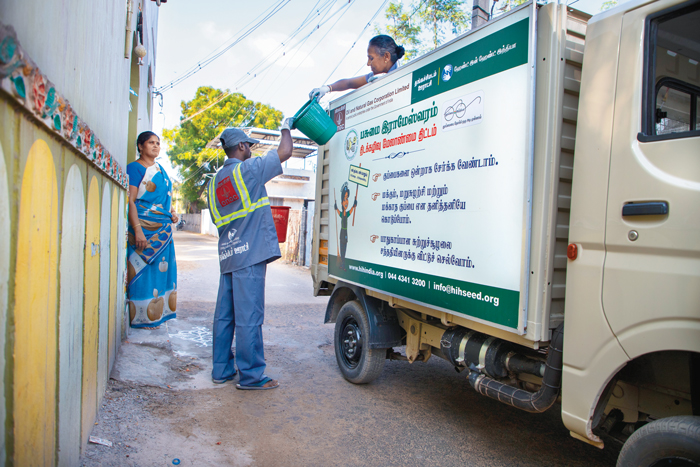 At 6 AM each day a team of 20 Green Friends start their work on the seashore of Ramanatha Swamy temple at Rameshwaram, with a pledge that they will keep the area clean

One of the major outcomes of this CSR initiative by ONGC is increased health benefits to the local people. The village panchayat is impressed with ONGC's work. “This Panchayat has benefitted from intervention by ONGC and we would urge them to continue this good work for a couple of years, so that the residents can be slowly made responsible to manage this SWM practice on their own,” says S Kathiresan, secretary Tangachimadam village panchayat. 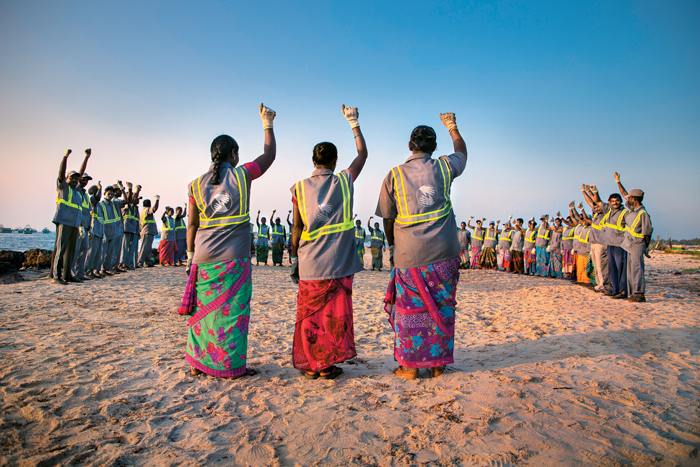 The daily door-to-door collection of waste has helped to keep house & the streets clean in Tangachimadam village panchayat. Efforts of ONGC is highly appreciated by locals and administration.

The results are visible in Tangachimadam village too, where 3 LMVs (goods auto) have been purchased for door to door collection of waste. Each household has been given two wastebaskets for wet waste and dry waste collection, free of cost. The signage on the LMVs informs the residents that they should use the green basket for biodegradable waste, blue for recyclable waste and red basket for wastes like sanitary napkins and medical waste. Each day the waste collection is done by the 12 Green Friends and three motivators ( four workers and one motivator for each of the three vehicles), using the LMVs that play two folk songs in Tamil highlighting the importance of SWM and reiterating the efforts of ONGC and HIH as they seek cooperation from residents to participate in this effort. 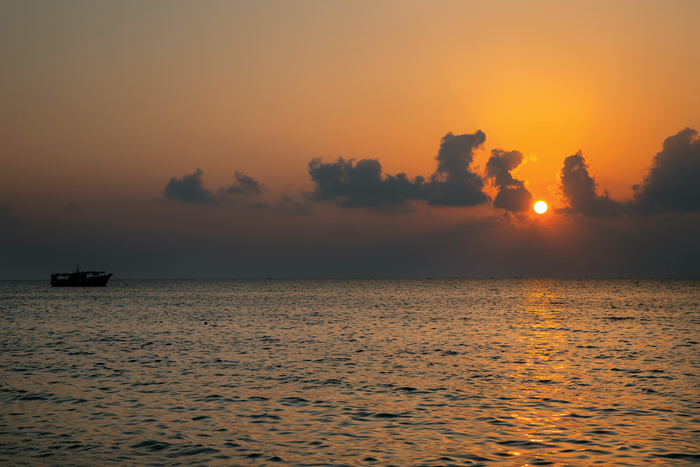 The Green friends are contractual labourers and get a monthly salary from the municipality; in addition, they make about Rs 75-Rs 150 each day by selling the retrieved recyclable solid waste like iron and plastics from the waste that they collect from households. CSR support by ONGC has brought not only environment dividends, but also positive outlook for these green friends, as HIH has provided Rs. One lakh group insurance and regular health check-up facilities to the workers along with protective pieces of equipment with support by the local municipality. 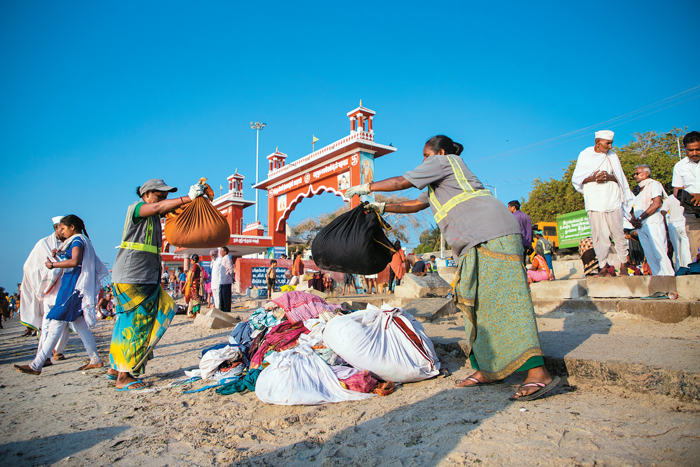 On average, each day, about one ton of clothes are collected from the shores left by the devotees visiting from across the country. On special and auspicious days, it can go up to 4-5 tons

This southern part of India along the Bay of Bengal faces a major challenge, that is the collection of the clothes and plastics disposed of by the devotees on the shores. A team of 20 Green Friends begin their day at 06.00 AM in the morning on the seashore of Ramanatha Swamy temple at Rameshwaram, with a pledge that they will keep the area clean. It is not a simple routine pledge but a reiteration of the commitment by ONGC and its partner HIH to keep the surrounding areas clean and also protect the environment, come rain, heat or dust. 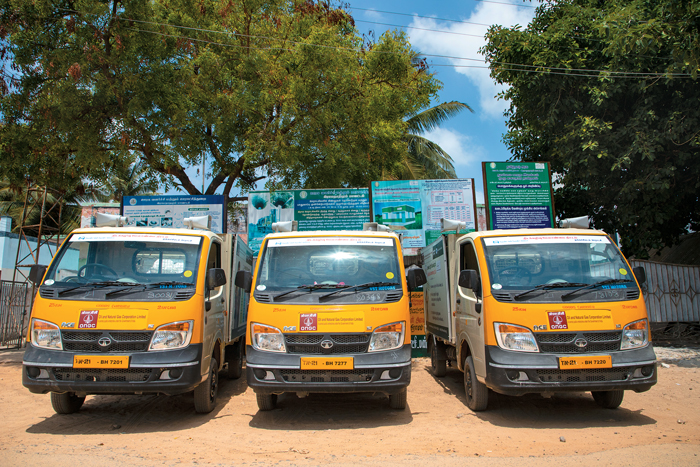 The compost is made from biodegradable waste collected from houses.

On average, each day about one ton of clothes are collected from the shores, which are left by the devotees visiting this place from across the country. “On special and auspicious days, it can go up to 4-5 tons,” says Babu. The Green Friends collects them and the municipality takes it from them for segregation and disposal. Thus not only domestic waste is systematically collected and disposed off, the CSR initiative by ONGC takes care of another serious waste generated in form of clothes, that are left by the devotees which are also disposed of in proper place. 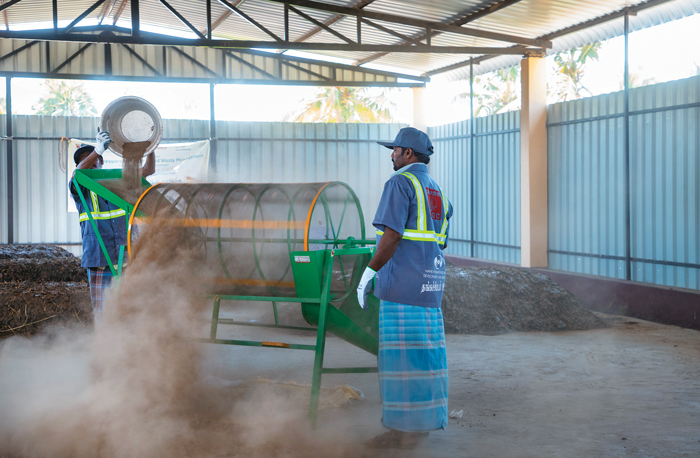 The compost procured by 'wind-row' method in an ONGC funded shed and equipment, helps the warriors of cleanliness earn an extra income.

The HIH Green Friends are meticulous in the collection of all type of waste including plastic and other solid waste and disposing of the same in stainless steel waste boxes funded by ONGC. ONGC’s CSR team has defined a set of core values for themselves- Compassion, Conviction, and Innovation. It is a guide to them in serving the society and extends to ONGC’s partners, stakeholders, communities and the environment. Besides being focused primarily on the welfare of economically and socially deprived sections of society. ONGC’s CSR aims at developing techno-economically viable and environment-friendly projects having sustainable impacts and ensuring the highest standards of safety and environmental protection. 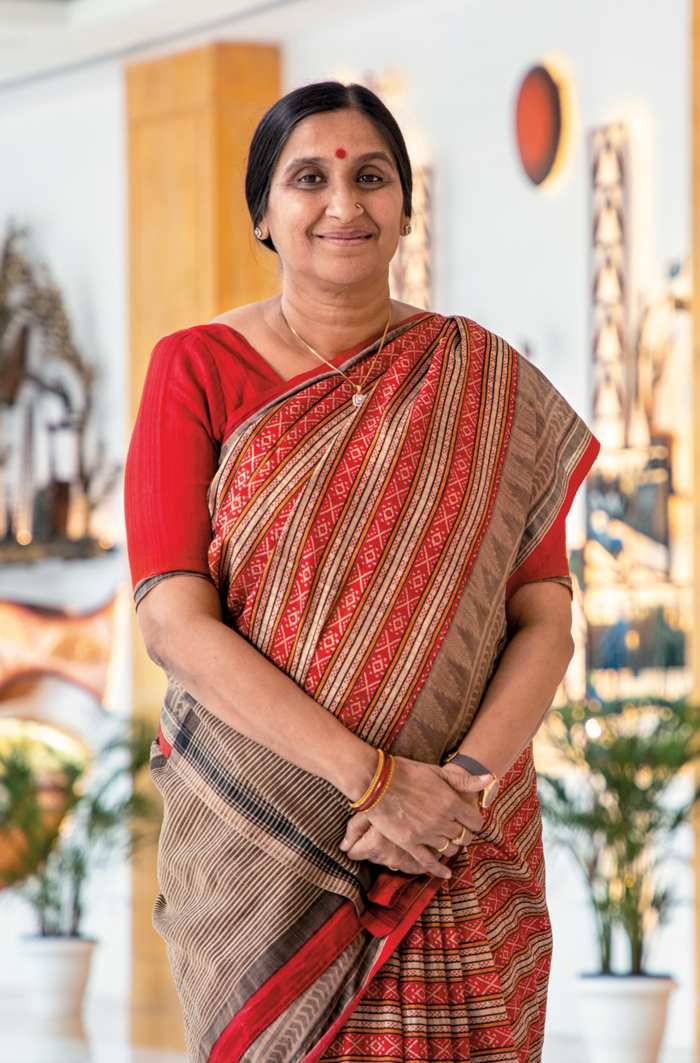 The ONGC team has all the reason to smile. The interventions they have made has shown perceptible changes in the lives of intended beneficiaries.

What is the biggest inspiration for ONGC in its CSR activities?

ONGC, the Flagship National Oil Exploration and Production Company of India has been entrusted with the strategic responsibility of India’s Energy security. While pursuing our business objectives of finding and producing oil and gas assets across the country, ONGCians have to regularly engage with communities and local administrations in the remotest and most backward areas of the country. These interactions have given a unique insight into ONGC and ONGCians about the socio-economic- environment conditions. This insight is the inspiration for ONGC to connect with the communities and social/economic/ environmental issues across the length and breadth of the country in order to create shared value. Since 1980, ONGC has been carrying out such activities under its Socio-Economic Development Program (SEDP). This was even before ONGC was registered as a Company in 1994. In 2003, ONGC became the first organization to allocate 0.75% of PAT for CSR under its Corporate Citizenship Policy.

In 2006, the Corporate Citizenship Policy was revised including thrust areas, roles & responsibilities of work centers and delegation of powers for CSR. In 2009, a dedicated CSR department was established within the Company to undertake CSR activities. The company for the first time issued separate CSR Guidelines in 2009. The CSR budget was also increased to 2% of PAT. After promulgation of section 135 of Companies Act, 2013 and enactment of Companies (CSR Policy) Rules 2014, and the issue of Guidelines on CSR and Sustainability for CSR by Department of Public Enterprises in October 2014, ONGC has aligned its CSR Policy accordingly.

Beyond mere allocation of funds, we are committed to ensuring that our CSR Projects create a sustainable impact for the community

How will the program at Rameshwaram inspire employees of ONGC?

We are operating in Ramanathapuram District for more than 2 decades. The Gas supplied from the Gas Collection Station of ONGC, Ramanad to TNEB Power Plant generates more than 500 MW electricity. There are a number of drilling wells in operation in this area. Green Rameshwaram project is one of the Proactive CSR projects of ONGC developed by the CSR team with the involvement of employees from the local Asset / Work Centre. ONGC’s association with Ramanathapuram, through this Project, is a matter of pride for all ONGCians. Ramanathapuram, which has the distinction of being the birthplace of late Dr. APJ Abdul Kalam, former President of India, is one of the 20 aspirational districts allocated by Department of Public Enterprises to ONGC for development under CSR. Therefore, ONGC is involved in several other CSR initiatives in this district.

Why CSR is more than just giving money?

Loviya Therus a resident of Tangachimadam “We are thankful to ONGC executives who initially sensitized us on the importance of SWM. The song played by vehicle is hummed by children and everyone gets alerted and they are able to deposit the waste. The benefit is now we have very fewer cases of diseases like malaria and dengue in our ward. Earlier, since the waste was thrown around and that too was collected after a week, it used to act as a breeding ground for insects and mosquitoes. The Green Friends are regular and the song they play even act as an alarm for many. My message is that this effort should be extended to the whole of all 13 villages in Tangachimadam,” she says. 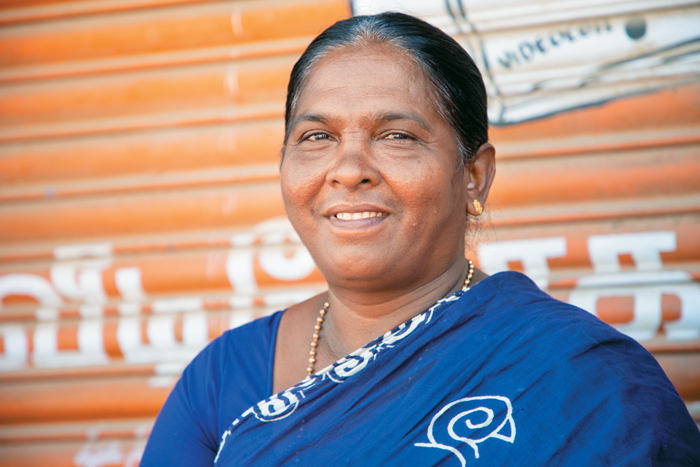 Esther Rani another resident of Tangachimadam says: “It has been a beneficial effort by ONGC. Earlier, even the weekly collection was not regular and the households here used to throw it wherever they find vacant land and the whole colony used to stink. Now, you can see for yourself the cleanliness.” 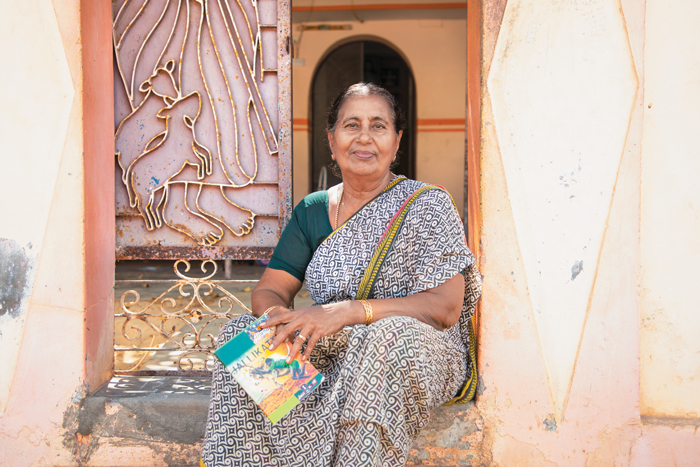 Corporate Social Responsibilty is becoming a fundamental part of many organisations’ operating procedures. This book showcases the work of some of India’s leading companies that have put policies and measures in place to incorporate social, ethical, environmental, educational, human rights and consumer concerns into their business operations so as to improve the lives of India’s local human capital.

All rights reserved. No part of this publication may be reproduced, stored in a retrieval system, or transmitted in any form,or by any means electronic, mechanical, photocopying, recording or otherwise without the prior permission of the publisher.Copyright © 2019 Outlook Publishing (India) Pvt Ltd