Life Insurance Corporation of India (LIC) needs no introduction. It has been synonymous with life insurance in India, ever since it was established by the LIC Act 1956, enacted by the Parliament to nationalise insurance industry in India. LIC’s motto is “Yogakshemam vahamyaham”- “your welfare is my concern” and through the years, LIC has been living up to that promise. Probably, that is the reason LIC has remained the number one insurer even after the insurance sector was opened up in the early 2000s.
Not everyone knows about LIC’s voluntary community service initiatives, through the LIC Golden Jubilee Foundation, set up in 2006, to commemorate 50 golden years of service to the nation. The objectives of the Foundation are Relief of poverty or distress, Advancement of education, Medical relief and Advancement of any other object of General public utility. The Foundation is registered with Charity Commissioner under Bombay Public Trust Act 1950, but has a pan-India presence, through the Projects and initiatives it supports across the length and breadth of the country, by joining hands with NGOs aligned with its avowed objectives. The Golden Jubilee foundation has supported projects ranging from construction of hospitals, school buildings and classrooms, library, computer centre, old age homes, hostel buildings for children in tribal areas, vocational training centres for differently-abled persons.

The infrastructural support to this children's home in Bhubaneswar, Odisha, was a help to numerous children.

In Sonbhadra district of Uttar Pradesh, the Foundation has adopted the village of Gobindpur, a remote village largely inhabited by tribal communities. GJF is actively engaged in the field of education and health through its NGO partner, the Vanvasi Seva Ashram. Founded in 1956, the Ashram has been working for the people of Gobindpur since its inception; conducting literacy campaigns, health camps, and other services. Notably, they have been able to make an impact during the times when ‘Sarva Shiksha Abhiyaan’ was highly prioritized. During those times, from 1990 to 1995, they could successfully organize literacy drives in 223 villages in Sonbhadra. Literacy drives, with the help of enthusiastic volunteers, were carried out in even the remotest villages.
The educated volunteers, who showed an interest in participating in the programme, were trained by the Ashram.After completing their training, they start teaching the villagers, special focus is given to elders.

Care is given to identify the pace of learning of each participant. The participants who go through the tuition are supposed to take three primers which assess their comprehension levels. They are then provided with certification for each of the levels of proficiency that they have been able to achieve. Upon finding an able ally, the Golden Jubilee Foundation has lent a hand to the people of Gobindpur by supporting adult literacy initiatives and by donating an ambulance to the Ashram Hospital.

The Vanvasi Seva Ashram hospital was constructed in an effort to provide basic health care facilities to the villagers, free of cost. Transportation of patients in serious condition to better equipped hospitals is a strenuous task, due to the remoteness of the area. Identifying the need of the locality, the Foundation has spent Rs 14 lakh on procuring an ambulance for the Ashram Hospital. The ambulance has been integral in setting up health camps in several villages of the district; a quite literal case of technology bridging a divide.

The villagers in secluded areas await the arrival of the mobile vans for treatment.

The two on-campus doctors are now able to visit villages to provide emergency care to patients. In a few villages, the perplexing increase of fluoride content in their water has caused widespread deterioration of health of the villagers. Such incidents of ill health require thorough research and systemic interventions. Even so, the efforts of the Golden Jubilee Foundation and the Vanvasi Ashram have ensured that these people are not neglected. Moreover, procurement of the ambulance negates the inadequacies of public transportation when a patient is referred to the hospital.
National Society for the Prevention of Blindness (NSPB) –India, is an organization that works on various aspects of prevention of blindness and healthcare.

The core belief of NSPB revolves around the fact that millions of ‘blind people’ in the country could retrieve their eyesight with minor interventions. The Golden Jubilee Foundation has been an associate in the efforts of NSPB. Through funding the second floor of the NSPB Karkardooma Eye Hospital building, the Foundation has assisted in providing high-class facilities at a subsidized rate. The Karkadooma Eye Hospital acts as a community ophthalmology centre, relying on experienced ophthalmologists and community workers, where the second floor functions as operating theater area for minor and major procedures along with in-patient facilities for the poor. 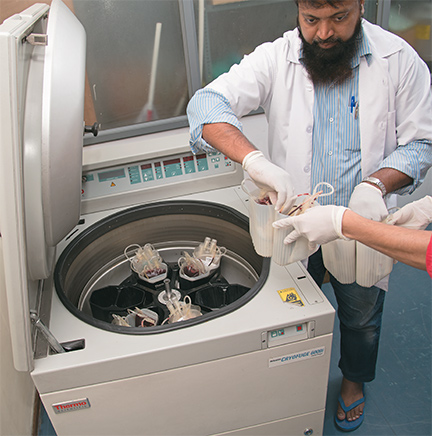 The blood centrifuge system allows for larger columns of transfusion at a much faster rate.

“We started with just 20 patients at Banjara Hills but slowly the number grew and we had to shift to Chatta Bazar, Purani Haveli. We mostly had all the basic diagnostic and treatment facilities that we have been providing patients free of cost,” said Suman Jain, Secretary of the Society. In order to keep the patients healthy, the red blood cells are transfused in them. However, the struggle, Suman said, was separating the contents of the blood. “The thermo cryofuge helps separate white blood cells and red blood cells from donated blood. We started our blood bank in 2010 and could buy the equipment only when LIC Golden Jubilee Foundation donated the money,” Suman added.The 20-year-old NGO believes in a mission to walk on the path of generosity and compassion, while the contribution from LIC has only helped them cater to their objectives. LIC has also been working towards improving the health scenario of the underprivileged and economically backward people.

Primary health care centres, mother and childcare projects, immunisation programmes, programmes for visually impaired,physically challenged, and other preventive health care awareness programmes are being covered.
In Kerala, the Golden Jubilee Foundation has invested in funding the Senior Citizen’s home for the Santitheeram Charitable Trust, Thrissur in 2016-2017. Headed by a team of dedicated doctors, trained caretakers, nurses, professionals and other officials, Santhitheeram focuses on providing geriatric care and hospice care to the bedridden elderly patients and the terminally ill patients. They believe in providing proper care and timely medical intervention to the sick elderly patients. The trust also acknowledges the need for psychological well-being of the admitted patients. Many of them are forced to lead lonely lives which can lead to psychological problems like depression, dementia and others. These requirements led to the idea of a senior citizen’s home that can provide them with a decent and comfortable stay in a peaceful atmosphere, offering respite from boredom and loneliness. Santhitheeram was founded, in 2001, by a group of retired professionals, mainly consisting of doctors. “The bedrock of Santhitheeram is friendship. The concept is to provide a space for the senior citizens where they can live the rest of their lives, not as patients, but as family,” said Dr. Tulsi, one of the founding members of the trust. It is in this friendship that LIC, through the Golden Jubilee Foundation, have invested in. The fruits of this trust and bond led to the creation of the senior citizen’s home in 2015. 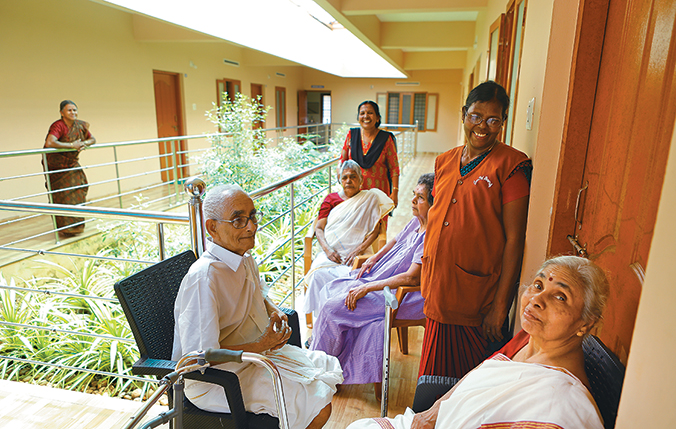 The golden jubilee foundation has supported various establishments like this senior citizens home in Thrissur, Kerala.

The senior citizen’s home, funded by LIC Golden Jubilee Foundation, provide rooms complete with accommodation, food, medical services like check- ups, psychotherapy, and rehabilitation. The priority for admission to the home is given to those who live alone, although admission is not exclusive to them. What makes this senior citizen’s home unique is that it provides comfortable, peaceful living conditions for those who seek a quiet retired life, while also providing caretakers, nurses and doctors from the hospice, if the need arises.

The “Santhitheeram Kudumbaveedu”, which translates to Santhitheeram Family Home, as it is named, focuses on providing the senior citizens a home where they can live their lives, peacefully, sharing their experiences, memories, thoughts and feelings with their peer groups as if they are living with their own families. These are just a few examples of the contribution made by LIC Golden Jubilee Foundation to the society. Over the years, the Foundation has supported 462 projects amounting to 75.59 crores, covering all the States of India and most of the Union Territories. It has also provided 15196 scholarships worth 32.38 crores to deserving, but impoverished students. The Foundation partners with Impacct Foundation to help finance treatment of cancer afflicted children at Tata Memorial Hospital. Golden Jubilee Foundation has also been a part of Swaccha Vidyalaya initiatives, Clean Ganga Mission, Chennai Flood Relief, and many more. It is said that: ‘be the change you want to see’. Golden Jubilee Foundation of LIC of India has quietly been spearheading the change-contributing towards a better society.

Corporate Social Responsibilty is becoming a fundamental part of many organisations’ operating procedures. This book showcases the work of some of India’s leading companies that have put policies and measures in place to incorporate social, ethical, environmental, educational, human rights and consumer concerns into their business operations so as to improve the lives of India’s local human capital.

All rights reserved. No part of this publication may be reproduced, stored in a retrieval system, or transmitted in any form,or by any means electronic, mechanical, photocopying, recording or otherwise without the prior permission of the publisher.Copyright © 2019 Outlook Publishing (India) Pvt Ltd