Email from the income tax department says discussion to be on Budget 2022’s impact on taxpayers. To understand your tax choices better, here’s a look at what the old and new tax regimes mean for you.

Many taxpayers would have received an email from the income tax department about a series of discussions on how the provisions announced in Budget 2022 will affect taxpayers.
The sessions are online and will be held today, February 11, by Pragya Sahay Saksena, member-legislation and systems, Central Bureau Of Direct Taxes. You can catch the sessions on the official social media handles of the tax department.
To understand your tax choices in FY2022-23, it is important to start from the basics, which includes making a choice between the old and the new tax regime.
To know more about how your income and investments will be taxed in FY2022-23, read Outlook Money’s Income Tax Guide For FY23 here.

In this article, we take a close look at:
1. What do the old and the new tax regimes mean?
2. What are their advantages and disadvantages?
3. Which is the regime that works best for you?

What Do The Old And The New Tax Regimes Mean?
Despite high expectations, Budget 2022 did not change the income tax slabs or the two tax regimes for individual taxpayers. Therefore, when you plan your investments for FY23, you still need to choose which tax regime works the best for you.
This choice is especially relevant for those taxpayers who don’t have major investments—for example, you may be a senior citizen who no longer has a need to invest in products that offer tax benefits, such as Public Provident Fund (PPF) or Employees’ Provident Fund (EPF) for retirement planning; or you may have just joined the workforce and don’t have expenses such as home loan or tuition fees, in which case a higher-in hand income is better.
Since FY2020-21, taxpayers have had the choice to pay income tax either under the new tax regime or stick to the old tax regime. 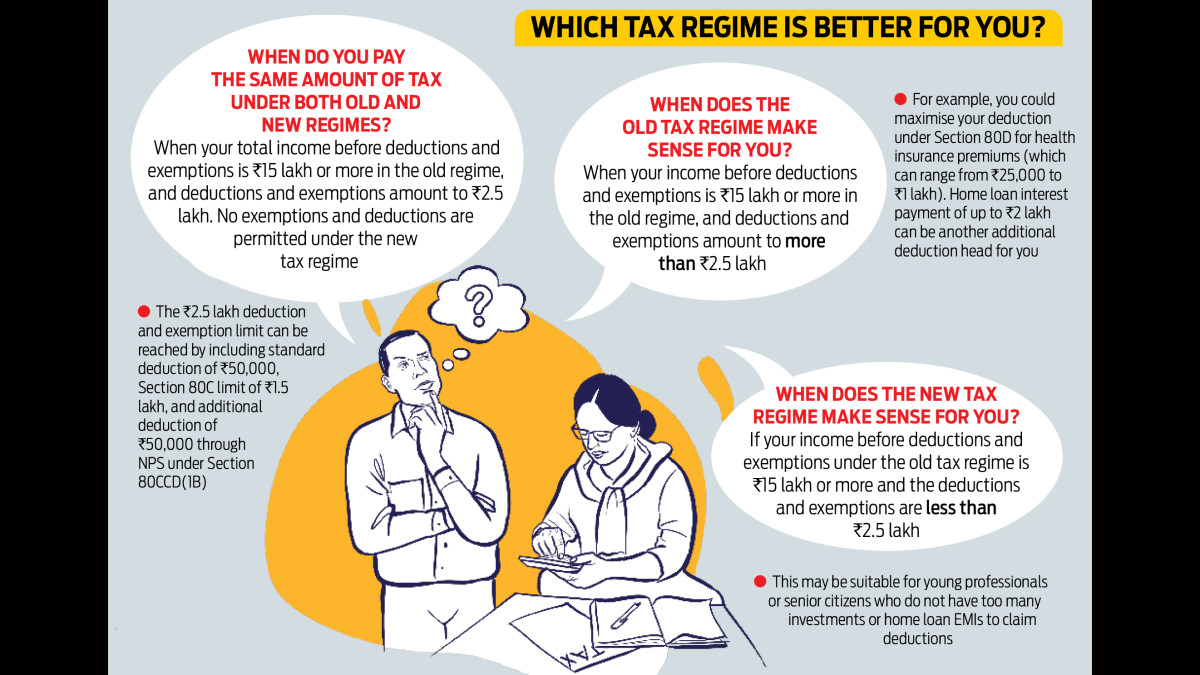 Which Tax Regime Is Better For You

What Are Their Advantages And Disadvantages?
Tax Deductions Allowed: While the new tax regime has lower tax rates, you cannot claim tax deductions on investments and expenses such as premium paid for life insurance and health insurance, investments in equity-linked investment schemes (ELSS), PPF, etc., home loan repayment, and many more. In all, there are about 70 exemptions and deductions. So, if you have, say, a home loan, a life insurance policy, a health insurance plan, EPF and PPF investments, then you may be better off choosing the old tax regime because that will allow you to save on taxes on these.
To compare how much tax you pay under the two regimes, go here.

Will 30% Crypto Tax Along With Lack of Set-Off Provision For Losses Kill The Industry?

Not Just Tax Relief, Even Personal Budget Can Help You Save More. 3 Things To Know

#Reducecryptotax Trends On Twitter A Day After Budget 2022; Bitcoin Falls Over 5%