Home to 20 per cent of the world's population, China’s transition began with the opening up of its economy to the outside world in the 1980s, as it overtook Japan to be the world’s second largest economy in 2010.

More from Ritesh Jain
View All

China had zero per capita GDP growth for 150 years till its  Civil War in 1949. From there, the communist country grew 3 per cent till 1978. But, since that time there has been no looking back, as the dragon nation has grown at a whopping 8 per cent.  Until 1978 China’s real per capita GDP was one-fortieth of the US.

Home to 20 per cent of the world's population, China’s transition began with the opening up of its economy to the outside world in the 1980s, as it overtook Japan to be the world’s second largest economy in 2010.

These efforts culminated in China joining the World Trade Organization in 2001 which eventually made this country world’s number one trading partner in terms of per cent  share of global exports by 2009; producing labour intensive products such as textiles, toys, clothes, footwear and furniture for companies and ultimately consumers around the globe. The Chinese economy which had grown 50 per cent  between 1980 to 1989, and 175% the following decade, now expanded by more than 400% in the decade after its accession to the WTO. There are 124 countries for which China is the largest trade partner vs. 56 countries for the U.S.

The Story Of India Since Liberalisation

Faced with rising inflation and a balance of payment crisis in mid-1991, India’s new government introduced a fairly comprehensive, orthodox policy reform package with currency devaluation as its centrepiece. After pursuing a closed, import-substitution model of trade and development for the previous 40 years, India changed direction and began opening the economy to trade and foreign investment. Yet there were signs that India wasn’t hitting its full potential. Average GDP growth of 6.2 per cent  over 30 years has been lower than China’s 9.2 per cent  and even lagged Vietnam’s 6.7 per cent.

Back in the 1980s, India and China were at a similar playing field – trying to liberalise their economies after decades of frustration with economic policies and resultant isolation of their economies from world trade.

In 1991, the office of controller of the capital issues (CCI) was abolished, thereby allowing NRI and FII investments in the corporate sector and (larger) Indian firms could now secure long-term low-cost resources from international capital markets. While the Indian stock markets boomed as supply of long-term loanable funds to corporates rose sharply, a sizable portion of these funds was divested elsewhere as the ratio of gross fixed capital formation in manufacturing to supply of long-term funds came down significantly during this period. Though India received a significant jump in FDI over the previous decade, foreign firms’ share in fixed asset formation in the corporate sector remained low.  Data suggests that FDI resources further went to acquiring managerial control in existing firms, intercorporate deposit, real estate – fueling property boom of the 1990s, takeover financing, trading existing capital stock leading to speculative activities. In essence, money came in the financial economy and not the re
al economy for India thereby diminishing fixed capital formation & infrastructure growth.

India remains a favoured FDI destination even today, however,a large part of these inflows go into the services sector. Average FDI from FY15 to FY21 in manufacturing was $8.6 billion compared to about $25 billion for services. This needs to change as the country chases the target of becoming a $5 trillion economy. Globally, trade in services is a third of merchandise trade. In India’s case, it accounts for 60 per cent.  An economy built on this model will generate white-collar jobs at a premium, compared to blue-and black-collar ones, leading to wealth disparity and inequality. Attracting FDI in capital-intensive sectors is key to the country’s gross capital formation and establishing its position as a global trade partner. A large part of foreign money propelled into India’s vibrant stocks markets which is fairly visible from the dominance of FIIs in top 100 listed companies on the Sensex. 35 out of these 100 companies have FII holdings in excess of 25% of their shareholding. India runs a trade deficit of $
50 billion with China (highest against any trading partner) in other words, India is sharing 2% of its GDP with China. 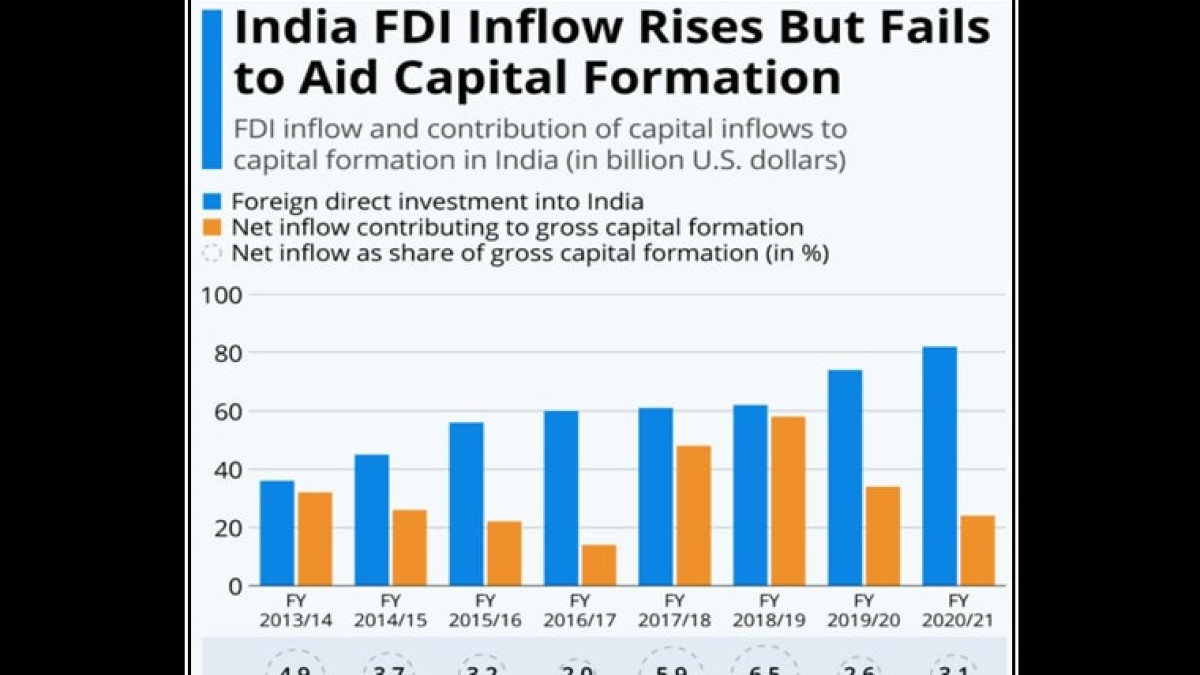 Until the 1990s there wasn’t a formal stock exchange in China enabling foreign investors to invest in the economy, hence the foreign capital went to the real economy, especially in China’s booming manufacturing export sector (52.74% share of the overall FDI from 1997-2015). More than half of China’s exports are now produced by foreign-owned firms. A large proportion of these exports is in assembly trade, in which foreign firms bring parts to China for final assembly and later re-exports, benefiting from cheap overhead costs. To put things in perspective, China’s trade volume in 2021 exceeded $6 trillion i.e., 2x of India’s GDP.

As relative unit labour costs start to rise in China along with tariff barriers with the U.S., investors are slowly switching to other Asian counterparts. At the same time, China has also opened its domestic financial markets to foreign companies which may lead to a shift from efficiency-seeking to market-seeking FDI. Essentially, the country has focused on first building up their real economy by acting as a one stop solution for major manufacturing needs, before proceeding to open up its financial markets for the outside world.

Both India and China have a significant part of the younger population moving overseas for education and both countries recognize that reverse migration of diasporic talent can contribute to domestic economic development. The dominance of Chinese and Indian students in U.S. higher education is most pronounced at the doctoral level, and in science and engineering fields in particular.

Historically, China has witnessed a long-term brain drain, in which Chinese students with U.S. Ph.D. degrees are more inclined to stay there than students from other countries. The past decade, however, witnessed a sharp increase in the proportion of returnees, especially in China. Chinese researchers working in developed countries are coming back, boosting China's scientific endeavours, and also triggering a wave of global knowledge exchange known as brain circulation.  For every 10 Chinese students studying abroad, there are 9 students returning home. 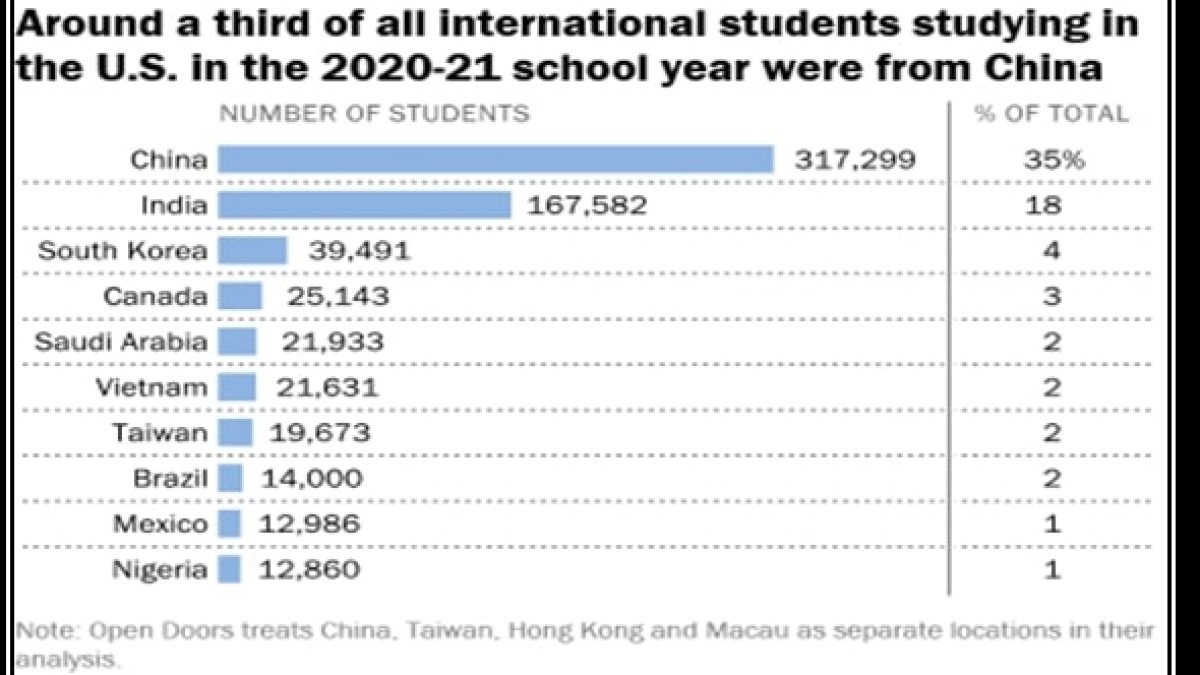 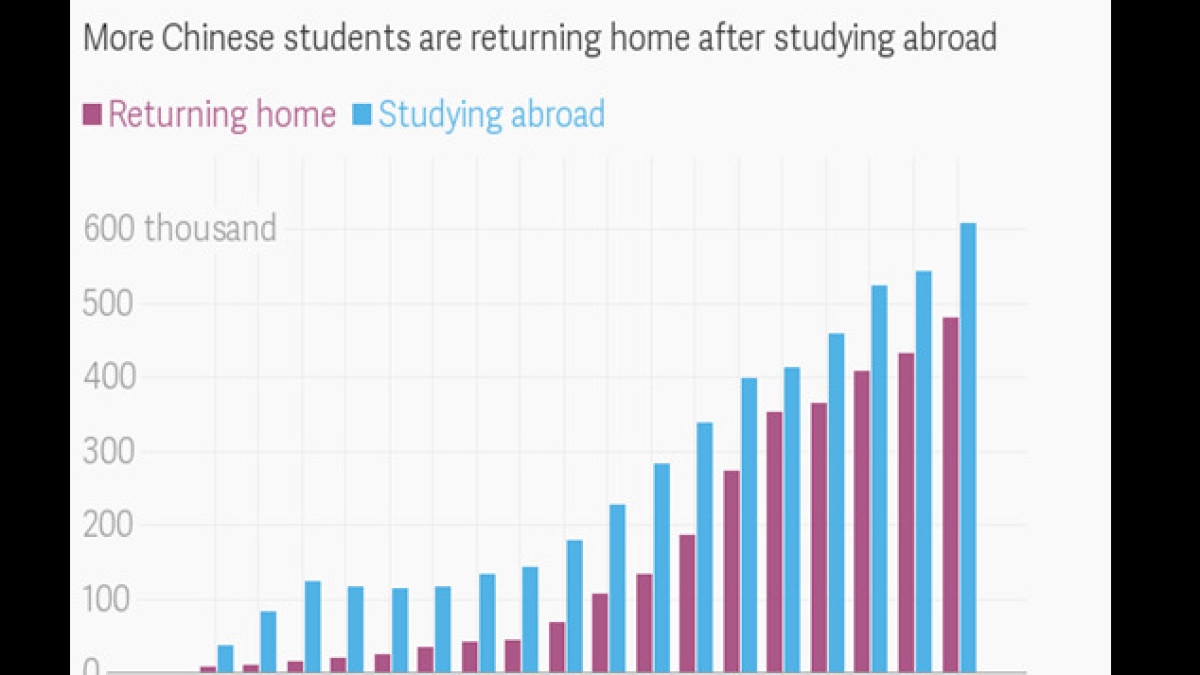 On the other hand, India witnessed the sharpest increase in people migrating overseas, at nearly 10 million (one crore), between 2000 and 2020, according to the “International Migration 2020 Highlights”. A joke in Silicon Valley is that Telugu and Hindi are the most spoken languages in the tech hub. A study by Ilya A Strebulaev, professor of finance at Stanford University’s Graduate School of Business, finds that 90 (highest for any non-US country) out of 1,078 founders across 500 US unicorns were born in India. 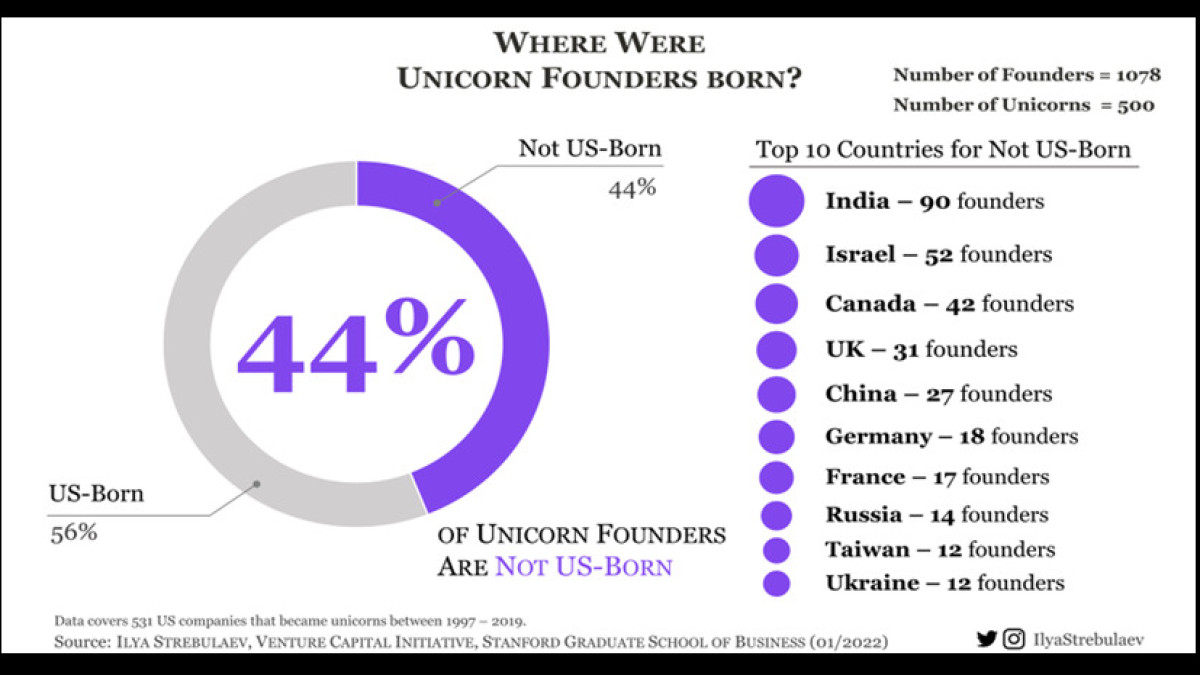 The Indian network has contributed to the emergence of a globally competitive software services industry, however there is little evidence of the return of entrepreneurship that could accelerate the upgrading of India’s capabilities.

In contrast, Chinese postdoctoral researchers often get experience in the West and then head home where the boom in Artificial Intelligence (AI) and quantum computing coupled with the Chinese government's pro-science policies helps set them up in world-class facilities.

Indian policymakers with a more laissez faire approach towards the overseas Indian community, have failed to fully exploit this tremendous resource, in part because of failures to improve the domestic infrastructure and regulatory environment. In the World Bank (2020)’s ease of doing business report 2020, China ranks 31st out of 190 countries, while India ranks 63rd.

How China Is Shifting Gear

With shrinking cost advantages due to rising education level and wages, the Chinese Communist Party (CCP) wants to focus on high end manufacturing to grow the middle class and reduce inequality. In 2021, the country took regulatory moves like -

China will spend much of the next decade trying to transition its investment/infrastructure/housing economy to a US styled consumption economy.

The Belt and Road initiative launched by President Xi in 2013, envisions the construction of road and sea connections between China and countries in Southeast Asia, Central Asia and through to Europe. OBOR is an evolutionary step in the strategy designed to create strong physical connections within partner countries that make concrete trade relationships for projection of power for China. China is moving away from the U.S. dominated exports to target the countries within the belt and act as a hub by opening up its financial markets along with the manufacturing economy.

Change in business plan for the Chinese economy can also be substantiated by the rise in patent filings by the country. According to World intellectual Property indicators, 2021, the top five countries (U.S, Europe, Japan, Korea and China) accounted for 85.1 per cent of the world's total patent applications filed in 2020, which is 7.7 per cent higher than their combined share in 2010. A large part of this growth came due to China, as it doubled its share in patent filings in the world from 19.6 per cent in 2010 to 45.7 per cent in 2020.

India has still not woken up fully to the significance of intellectual property rights (IPR), particularly patents, and their commercial implications. Patent filings and grants in India are dominated by foreign applicants: they filed two-thirds of patent applications in 2018-19 and got four-fifths of grants. Huawei, Mitsubishi Electric, Samsung, and Qualcomm filed more international patent applications each than the whole of India in 2019.

One reason why researchers are shy of patenting their ideas in India is the time taken to get a patent. In 2017, India on average took 64 months to grant a patent, compared with 22 months in China.

Without investment in physical infrastructure, it will be difficult to increase the per capita GDP of the country as the gap between haves and have-nots can be bridged by increasing the manufacturing jobs. While India has managed to export its white-collar jobs; growth impetus for a country would depend on the per capita income for its unskilled labour which in case of India needs a strong push given the huge size of its unskilled population.

China should not have become a part of the WTO; because it was not a market economy (it was massively subsidising sector) , but American corporate greed pushed Bill Clinton to pave the way for China to get into the WTO. American corporations gained profit margins as jobs were shipped to China.

The table is turning now as tariff barriers, OBOR investments and China’s push back against consumer tech companies suggests that the U.S-China relationship could see a material shift in the coming decade. This is the advantage India can exploit to build its manufacturing base which will help in increasing the country’s per capita GDP. In case India fails to capture this opportunity, the much talked-about demographic dividend of India will turn into a demographic liability.