With the Chinese government banning crypto mining, there has been an infrastructure boom in other countries in terms of crypto mining, leading to a spike in miners’ revenue globally.

Despite several countries cracking down on crypto mining and countries like China even banning it, there was a rise in the revenue generated by Bitcoin miners by 206 per cent in 2021, finds a report by Block Research and GSR, published in January 2022. Block Research produces analytical reports on different topics on a daily basis, covering mostly the digital asset space, while GSR is a crypto market maker and ecosystem partner. So does this mean, emerging centres of crypto mining can make it profitable?

The report finds that on a year-to-date basis, Bitcoin miners have generated a total of $15.3 billion in revenue, making 2021 a record year in terms of Bitcoin mining. This spike in Bitcoin mining also contributed to the skyrocketing price of Bitcoin in 2021. 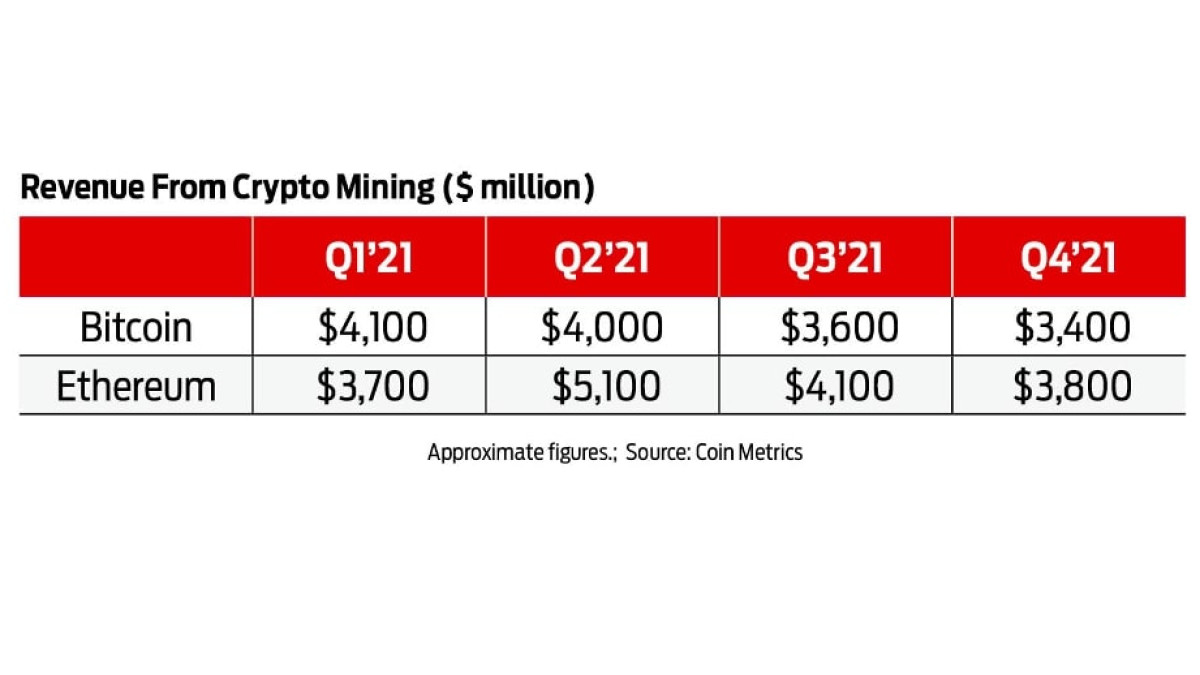 The scenario was no different for Ethereum miners. “Ethereum miners have generated a total of $16.5 billion in revenue, representing a year-on-year increase of 678 per cent, a record revenue year,” says the report.

Though revenues went up overall in 2021, they plunged in the later quarters of the year, following a crackdown by the Chinese government.

As the report suggests, there has been a steady rise in mining in countries other than China after the latter banned it in May 2021.

“Historically, due to the cheap energy, low overhead cost and the proximity to major manufacturers, Bitcoin mining had been an activity dominated by investors in China,” reads the report.

The study finds that approximately six gigawatts of capacity that had previously powered up mining facilities in Xinjiang, Inner Mongolia, Sichuan, Yunnan, had shut down after June forcing mining investors in China either to unplug machines and relocate overseas or sell their equipment. This sudden crackdown in China resulted in a plunge in the hash rate for both Bitcoin and Ethereum.

“For 2022, China’s crackdown has created an opportunity for overseas Bitcoin mining operations and has already led to an infrastructure boom in North America, Russia, Central Asia and Europe,” says the report.

According to data from CoinWarz, Bitcoin’s hash rate hit over 205 exahashes (hashes per second) on January 15, 2022, while the trend is no different for Ethereum. Thus, even after the plunge in June, the hash rate for Bitcoin was up by 19.6 per cent by November 2021.

During the second half of 2021, at least 12 public and private mining companies went on a fundraising frenzy, with each raising between $50 million and $650 million through IPOs, convertible notes, and equity issuances.