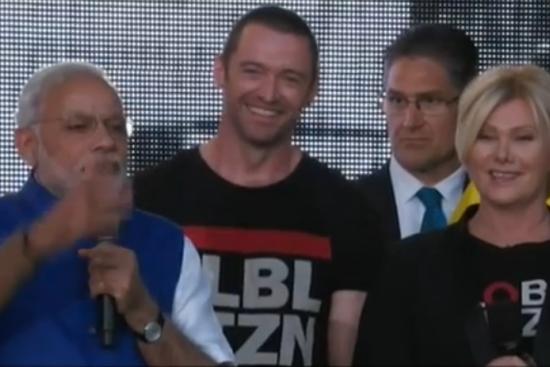 Mr Modi is in New York and John Oliver is in fine form:

"If you've been here in New York, it's been dominated by the UN General Assembly, the annual event where delegates come from all over the world to fu*k up the city's traffic.

"Almost every world leader has been here but no one has had a bigger imapact than Indian Prime Minister Narendra Modi. Just this morning he gave a sold-out speech at Madison Square Garden that featured everything, from dance-numbers to a live on-stage painter creating a speed portrait of it. And I gotta say, Modi, classic out-of-towner move: comes to New York, stays for a .few days and leaves with a slap-dash caricature, all done in the Times Square area: 'You're a cliche, Modi, you're a cliche.'

"But perhaps his crowning glory during the trip was his appearance at last night's Global Citizen Concert at Central Park. It wasn't as if he gave a great speech. It's that he had a one helluva finish:

Narendra Modi: Thank you once again for having me! Thanks in particular to Hugh Jackman. God bless you! May the force be with you!

"What? Wow! That's a power move right there! Standing next to Wolverine and throwing out Star Wars quotes! Bear in mind, this guy was banned from entering the United States up until just four months ago for his role in the Gujarat riots! That's quite a turnaround for him!

"And let me say this to all other world leaders. This is the new bar. Do not turn up to this city again unless it is with an A-list movie star and throwing out quotes from films that they were definitely not in.

"For instance, Rober Mugabe is not welcome here unless he is standing next to Billy Crytal shouting, "To infinity and beyond!" for no reason whatsoever.