'Yeddyurappa Has Not Denied The Incident'

So concluded the TOI report under the headline 'BSY didn't smash my laptop'  which quoted former BJP president M Venkaiah Naidu as denying that "outgoing Karnataka chief minister B S Yeddyurappa smashed his [Naidu's] laptop in a fit of rage for not defending him when the central leadership wanted him to resign. 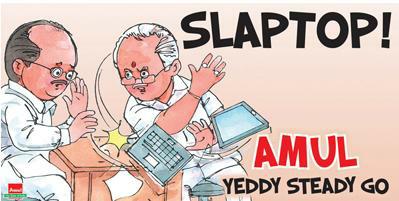 This followed a report the previous day under the headline "Yeddyurappa smashes Naidu's laptop, slaps minister" which had gone on to say:

Minutes after being relegated to the status of caretaker chief minister of Karnataka, B S Yeddyurappa (BSY) vented his anger at senior central BJP leader M Venkaiah Naidu, who was trying to pacify him. BSY flew into a rage and grabbed Naidu's laptop and smashed it on the floor on Sunday, according to party sources...

Such was the 68-year-old Lingayat leader's anger that when a minister close to him woke him up at his Race Course Road residence, he slapped the minister's face.

Apparently Mr Naidu also claimed that he doesn't have a laptop.

The TOI insists that its report was based on information given by two BJP sources, a Karnataka minister and an MLA.

Even on Tuesday, there was talk about the incident in party circles. Since the participants of the meeting are denying the unsavoury incident, we are publishing Naidu's clarification despite our sources' insistence that it's true.

The whole episode, however, highlights yet again the highly fractious and low-down nature of the political drama being enacted in Bangalore. If the laptop incident did not happen, the BJP local leaders' contention that it did indicates the length to which one faction is ready to go to smear the outgoing CM. And if it did happen, it is an eloquent testimony to the bitter wrangling within the party.

We have not heard anything further from or about the unnamed minister who was alleged to have been slapped.

Alert readers would recall that during BSY's Delhi visit also, it  was Naidu who had to bear the brunt of Yeddy’s anger.

Sources confirm that as Naidu urged the CM to resign, the latter asked him “to keep quiet”. Furthermore, he added, “Mr Naidu, you are an RS member from Karnataka. Tell me, how many times have you visited the state and spoken to the MLAs and MLCs who got you here. You know nothing about Karnataka.”

The outgoing CM's temper is legendary. Here is an incident from earlier this year:

Inside, in one of the rooms, some senior party colleagues were discussing strategy. The CM unexpectedly barged in there, lifted a chair, threw it and pointing a finger at one particular colleague (a national general secretary of the party, no less) let out a volley of abuses: “You...this is all happening because of you. Leave my house. Now. Immediately.” The leader quietly left. Those witness to the incident were dumbfounded for awhile, though later it was more of relief that it had not distracted the media outside.

But then we are not talking of an ordinary chief minister. As TJS George reminded us in the New Indian Express, this was a man who was convinced that he was the best leader Karnataka ever had, worthy, as he had said himself, of a Nobel:

There is no match for him in Indian politics. He is amazing. He is unbelievable. He is a pulsating anthropomorphic mechatronic phenomenon of terminatorial indestructibility. An absolute marvel.

Is Banning The Answer To Inflammatory Words?