Best performance, key result and a moment that stood out 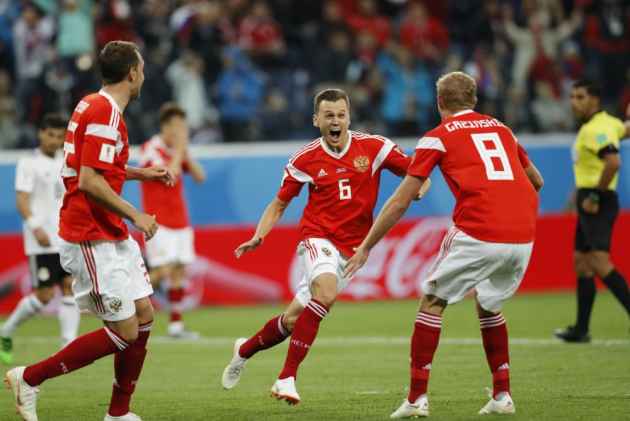 The World Cup is here, and it’s all everyone wants to talk about. Feeling left out of the conversation? Read this and you should know enough to sound like a seasoned football fan able to pick up on the best performance of the day, a key result, and a moment that stood out. Without much ado, here is your definitive round up to Day 6 of the FIFA World Cup.

A youth product of the Real Madrid academy, Cheryshev once shared a dressing room with Cristiano Ronaldo and now shares the top spot in the scoring charts with the Portuguese captain. Although Russia were expected to perform well in the World Cup being the hosts, one wouldn’t have expected the Villareal winger to be in such limelight. In 2011, Cheryshev professed in an interview to Marca he felt more Spanish than Russian- at the time he was eligible for both nations. Before the World Cup, Cheryshev was yet to score for the national team. Now he has three to his name, and he was at the centre of affairs as Russia soundly beat an Egyptian side which welcomed their messianic forward Mohamed Salah back from injury. Cheryshev’s goal in a 3-1 win ensured that Russia are all but through to the next round, unless Saudi Arabia are able to spring a surprise and beat both Uruguay and Egypt. The Russians must now turn their focus to the game against the South Americans, as that clash will likely decide the winner of the group, and Denis Cheryshev must make his purple patch continue should the Russians stand a chance of breaching the Uruguayan defence.

While Senegal’s first goal was extremely lucky from Poland’s point of view- as Polish defender Thiago Cionek gave Idrissa Gueye’s shot a heavy deflection to guide it into the polish net; the second goal was just an unnecessary gift to the African side; polish keeper Wojeich Szczesny was dumbfounded when Krychowiak hacked the ball into the air towards his own goal into no-man’s land, only for Senegalese forward Niang to latch onto the ball and round the keeper and score. Krychowiak made amends with a powerful header to score a consolation, but it wasn’t enough as Senegal went on to become the first African side to pick up points this World Cup. This result was a big upset and completely opened up a group in which Poland and Colombia were expected to progress with ease. Now the European side faces the South Americans and both will be playing for the win in order to stay in contention for the Round of 16, which means we can be sure that should Senegal manage a point against Japan, our hopes of seeing an African side in the round of 16 were not extinguished with Egypt’s disappointing campaign.

In a World Cup which will probably be long remembered for its upsets, we still don’t see them coming. Colombia were expected to dispatch Japan with ease, but the whole game changed when the South Americans saw their 32-year-old defensive midfielder Carlos Sanchez getting a red card for making a goal saving handball. Shinji Kagawa slotted in the spot kick, and Japan went on to dominate the game from there. Colombian midfielder Quintero’s deft free kick was light at the end of the tunnel, as they subsequently brought on 2014 World Cup Golden Boot winner James Rodriguez in a bid to get their second goal, but eventually were outnumbered in a set piece where Osaka scored a powerful header to win the game. The red card opened the game up, and gave Japan a strong chance at winning the game- which they did. It also completely changed the trajectory of Group H, and it will be interesting to see who qualifies to the knockout stages from here.

Russia’s win broke a 100 million Egyptian hearts, and effectively closed up group, where we should see Uruguay and Russia progress easily, as the top spot is all that’s left to play for (all due respect to Saudi Arabia). But to paraphrase what a ‘wise person’ once said, when one group closes, another one opens up, and that is exactly what happened. Senegal and Japan’s shock wins were aided by favourable deflections, horrible back passes, and a red card; but it would be unfair to say they got lucky. Football is all about mistakes and how you capitalise on them, and to their praise, Japan and Senegal made the most of their opportunities. With this, the first round of fixtures comes to an end, and the second round should bring answers to some of the interesting questions the first round raised. Now is not the time to look way, but rather the time to lock in. Stay tuned for more.