The World Cup is here, and it’s all everyone wants to talk about. 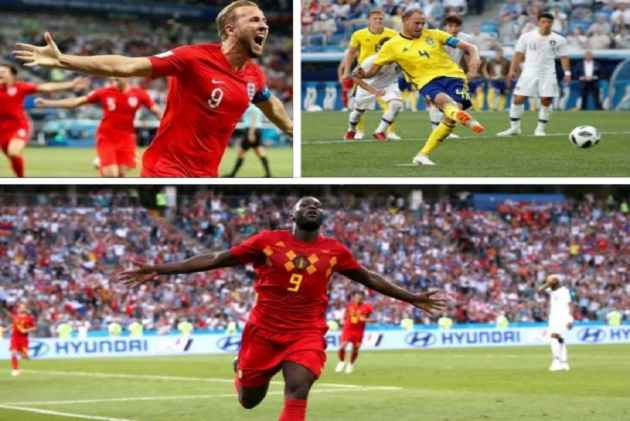 The World Cup is here, and it’s all everyone wants to talk about. Feeling left out of the conversation? Read this and you should know enough to sound like a seasoned football fan able to pick up on the best performance of the day, a key result, and a moment that stood out. Without much ado, here is your definitive round up to Day 5 of the FIFA World Cup.

Not a part of the English squad that went to Brazil for the 2014 World Cup, Harry Kane was a man known to a little number of people four years ago. Having just come off a distinctly average loan spell with Leicester, no one thought that over the course of the next four years the towering centre-forward would score over 20 goals each campaign and pick up the golden boot twice in the process, turning into one of the most lethal strikers in the world. He has made sure to pack that killer instinct into his luggage going to Russia, as he was the one to spare England’s blushes as they nearly drew to a Tunisia side which had no business causing trouble to the three lions in the first place. While Sterling and Lingard scuffed chance after chance, and Walker gave away an unnecessary spot kick, Harry Kane rose to the occasion, and to the ball, to slot it into the back of the net twice to help England snatch a 2-1 win. He had the fire and desire to create calm out of chaos, scoring from set-piece rebounds and flick ons, guiding his teammates to an essential win in order to give themselves a chance to top their group. He even had two strong penalty calls which fell to deaf ears, and beyond the two goals, he was part of almost every productive play England made. If football is to come home, and England are to do well, they must ensure captain Kane stays fit and happy, because in an extremely talented and young squad, he seems to stand out.

Belgian national football team- the eternal dark horses. This time, however, they might just be clear favourites. In a World Cup where all the traditionally strong teams keep faltering, the path seems to be paved for the new kids on the block to show their superpowers. Belgium have the most balanced squad in the entire World Cup- a world class keeper in Courtois; a formidable defence with Kompany, Alderweireld, and Vertonghen commanding the back line; a striker like Romelu Lukaku who every defender has nightmares about; and two of the world’s best midfielders in Kevin De Bruyne and Eden Hazard. With this squad, it should be a no-brainer that they are favourites to lift the trophy, but no one seems to take the red devils seriously. Their game against Panama was a wake up call to the doubters. While the first half was a little gritty, Mertens’s wonder goal set all the gears running fluidly, and soon enough the reds were unstoppable. They flicked and floated the ball around at will, playing through and around a hardworking Panama side with unbelievable ease. De Bruyne set up a second with a ridiculous outside-the-boot cross which Lukaku headed home with conviction, while Eden Hazard led a lightning counter-attack to which Lukaku put a calm and cool finish to wrap up the game. The European side are starting to look like a daunting proposition, but coach Roberto Martinez must ensure that lacklustre the first half isn’t repeated, because the big teams won’t be as forgiving as Panama were.

It’s the curse of the World Cup- the defending champions are bound to have a rotten campaign. Since 2002, all the defending champions with the exception of Brazil in 2006 have failed to make it to the knockout stages. After Germany’s loss to Mexico, Die Mannschaft would have been praying that Sweden and South Korea would draw to each other, to ensure that in the worst case scenario that Mexico win both of their remaining games, the Germans would have a clear shot at finishing second in the group. Those prayers were almost answered as there was a strong penalty appeal from the Swedes waved off by the referee, but in came Video Assistant Referee (VAR). The team of officials reviewed the decision and deemed that there was no contact with the ball, and turned play back to point to spot kick- and Granqvist converted with ease. Sweden went on to win 1-0 and Germany must win in their game against them next week, because should they even draw against the Scandinavian side, and should Mexico manage a win against South Korea, Germany can kiss their World Cup hopes goodbye.

It was another great day of football- Belgium showed style and swagger, while England showed intensity and intent. Sweden and South Korea played out a closely contested draw separated only by a penalty, and set us up for the last day of round one of the group stages. Teams are finally getting into their swing and the World Cup is just beginning, stay tuned for more...