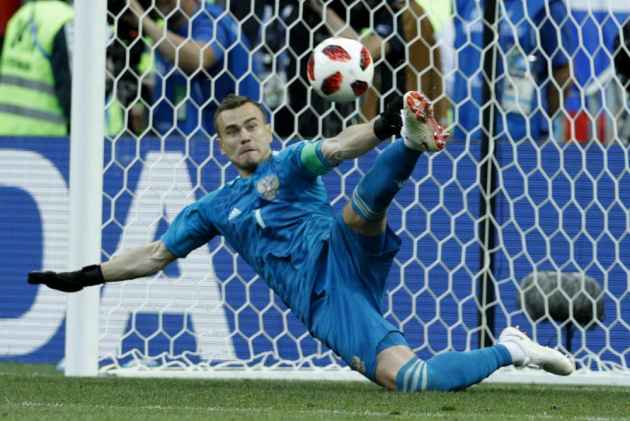 In the 109th minute, spanish substitute Rodrigo did brilliantly to turn in and create a chance, and he dispatched what should have been the winner, but Igor Akinfeev was there to make a save, his eighth of the night. It was at that moment that the camera turned to Isco and captured his expression which summed up Spain’s night- helpless. What more could they do? The game stayed at 1-1 as the Russian goalkeeper made another routine save, but then went on to become a national hero as he made two saves in the penalty shootout. Akinfeev was a wall in a game where his teammates needed him at his best, as the Spaniards had 71% of the ball and dominated every element of the game. Thanks to his strong performance, however, Russia will go through upsetting all the odds.

Another thrilling shootout wrapped up day 17 for us, but it actually came on the end of a fairly tight game. Kasper Schmeichel was Denmark’s hero as he made 6 saves including a penalty from Modric. The game started with a goal from each side in the opening 3 minutes, after which both teams struggled to score. Croatia were eye-catching in their link up play, while Denmark went route one with long throw-ins and cross field passes. There were two distinct styles of play, but ultimately one couldn’t triumph over the other as the game went to penalties and Schmeichel’s heroics couldn’t keep the scandinavian side alive as Croatia eventually won the shootout 3-2. Modric may have missed a penalty, but he was completely in control of the game as he dominated the midfield with Rakitic and Brozovic. Lovren and Vida were once again rocks in defence, while Subasic made match-winning saves in the shoot-out. Rebic is turning out to be the finding of the World Cup, while Pereisic’s stock rises with every game. Lastly, up front, Croatia have one of the best and most experienced forwards in Mandzukic. No one seems to take the east-european side seriously, but they really do have the makings of potential champions. They lived up to that billing once again as they oversaw the challenge of a hard-working Danish side.

A legend departs, and maybe not under the circumstances he wanted to, but he will find solace in the fact that his last touch of a football on the international stage was a well taken penalty, With that, the 2010 World Cup winner walks away as the ambassador of Spain’s golden generation, as shinier and younger players vie to take his place. Spain have already started building around the likes of Isco and Asensio, and the days of Xavi and Iniesta are now fond memories. Spain are out of the World Cup, and there Iniesta couldn’t save them one last time despite his best efforts. Nothing, however, can change the stories he has already written, as La Roja dominated international football for a good decade with him right at the centre of it all. Now, it is time for him to watch from the sidelines. Thank you, Andres.