It is no secret that India's general elections are one of the most expensive in the world. Last year, India's General Elections that catapulted Narendra Modi from Gujarat to the national capital was considered the second-most expensive election ever after Barack Obama's campaign. The contrast between the two is evident: the US is one of the richest and most powerful nations in the world. In the eyes of many, India remains a developing nation.

Nevertheless, ho-hum was the typical reaction when the nation got to know about the high cost (Rs 60 crore) of Modi's 3D campaigns.

The Times of India reported:

"The 3D holographic campaign, a novelty in the 2014 Lok Sabha elections and a critical component of Narendra Modi's hi-tech campaign enabling him to address more than 700 virtual rallies, cost BJP over Rs 60 crore. The licence fee alone for two months during the campaign accounted for Rs 10 crore."

While many estimates were flowing in about how much India had spent in the 2014 elections, Outlook had done its own calculations and arrived at the conclusion that a mind boggling Rs 31,950 crore was spent in general elections 2014. That's a little over $ 5.2 billion, which is ten times the Rs 3,426 crore the Indian government spent on conducting the elections.

"Sensing a strong anti-incumbency 'wave', parties dug deep in their pockets and spent big money to ensure a victory. They paid for every trick in the book to lure voters — from huge publicity campaigns to attempting to buy their commitment via the age-old practice of gifts, liquor and food. Politicians also say that cash-for-votes is rife, particularly in Andhra Pradesh, Punjab, Uttar Pradesh and Maharashtra."

Of the Indian total, the BJP alone is estimated to have spent two thirds — or over Rs 21,000 crore — in the elections that brought them to the throne. 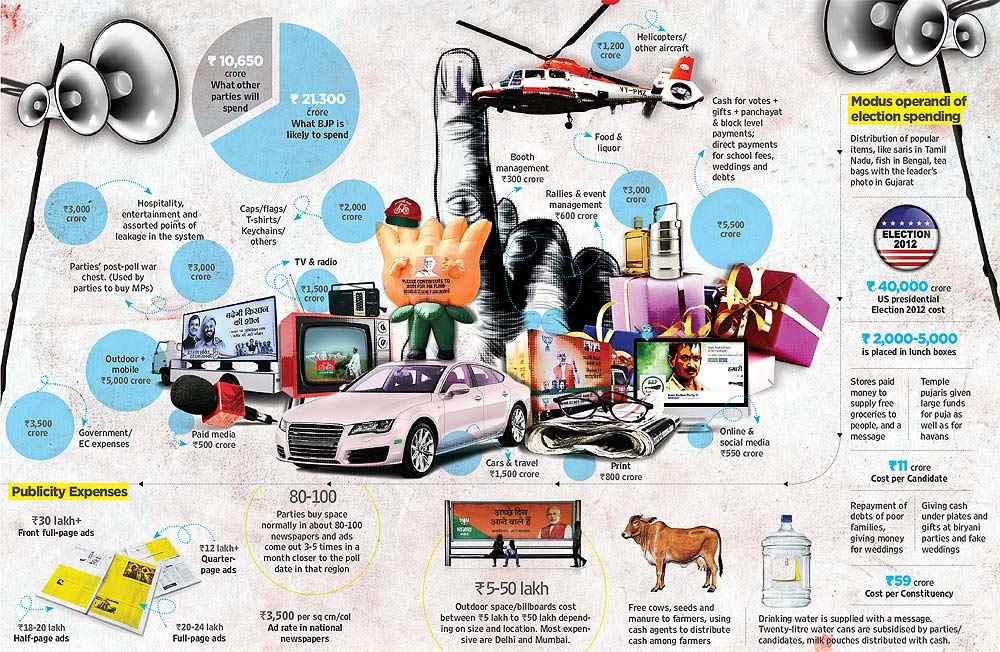