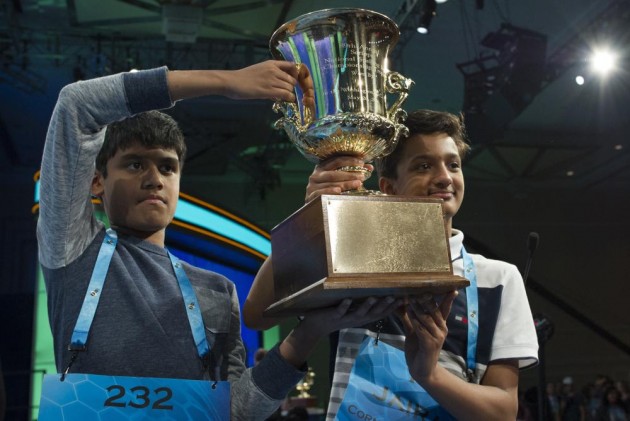 It is for the fifth time in seven years that Indian Americans have won the Scripps National Spelling Bee. And what's more, the ethic group has dominated all three top spots.

Eleven-year-old Nihar Janga and 13-year-old Jairam Hathwar hoisted the trophy together as co-champions while Snehaa Kumar finished in the third place.

Explaining this dominance of the Indian-American community in US' annual spelling contest since 1925, Tunku Varadarajan writes in the Wall Street Journal:

In the case of the little Indian-American spelling champs, an arguable one is that this ethnic group has pushier parents than any other tribe, all very eager -- no, make that desperate -- for their kids to succeed at school, or at anything that looks remotely like school.

This attitude draws on a particular Indian cultural trait, bequeathed to broader Indian society by the Brahminical upper stratum: Success at letters is the sweetest sort of success, the achievement nonpareil.

Right before the finals Time magazine talked to eight former champions to see what they went on to do in life after winning the Spelling Bee and how the study prep for bees helped them get there:

There is William Cashore, the 1954 champion, who is a Neonatology specialist and professor emeritus at Brown University’s Alpert Medical School and Peg McCarthy the 1978 winner who is a clinical psychologist. And Balu Natarajan, the 1985 winner who is now a Chief Medical Officer of Seasons Hospice and Palliative Care. Take a look.

Oh and by the way, the youngest Spelling Bee contestant this year, 6-year-old Akash Vukoti...the name gave away what I was about to say. Yes, also an Indian-American. Watch him give tips on how to spell right!

Here's another fun fact. In India, everytime results for school passing exams or civil service exams are declared, "Girls outshine boys...again" is pretty much a common headline. Turns out it's the same way with Spelling Bee. Of the 93 champions, 48 have been girls and 45 have been boys!