Who's That In Obama's Pocket?

President Barack Obama holds a lucky charm given to him during the campaign, while on the phone with a Member of Congress in the Oval Office, March 21, 2010. (Official White House Photo by Pete Souza)

Here's that locket in his pocket blown up: 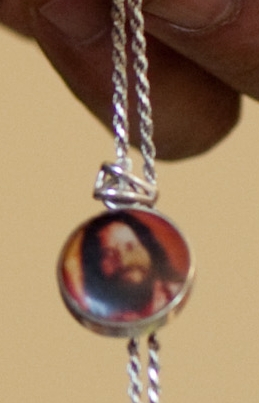 The White House Flickr feed is great that way, as it provides really large sized photos (Sepia Mutiny had of course done the hardwork already)

So who do you think it is?

(All right, so it isn't that big a deal, considering the various rudraksh and what not that we are used to seeing our politicos wear, but what the hell. As long as the most powerful man in the world is not chanting Om lingalingalingalinga, kilikilikili, we can perhaps let him have his superstitious moments)

For excellent commentary, theories, speculation and more funda, read on at the Sepia Mutiny blog post and the comments.

Oh, it does add: ”I love the Mahabharata and Ramayana stories,” said Obama. “I used to love wayang and I am still inspired by the stories and [the character] Hanoman.” Not that it has anything to do with the above necessarily.