The latest survey report on Pakistan by the Pew Research Center’s Global Attitudes Project which did face-to-face interviews with 2,000 adults in Pakistan April 13 to 28, 2010 shows some interesting results. Some of those:

1. Pakistanis are "more worried about the external threat from India than extremist groups within Pakistan. When asked which is the greatest threat to their country – India, the Taliban or al Qaeda – slightly more than half of Pakistanis (53%) choose India, compared with 23% for the Taliban and just 3% for al Qaeda" 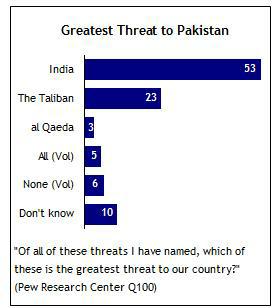 2. In its relationship with India, Kashmir is the biggest issue:

3. But a majority also wants improved relations with India: 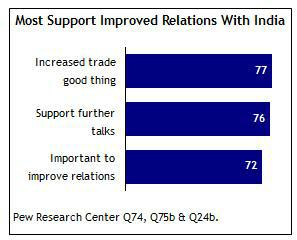 (As against this, 64% want "improved relations with the US"

4. Only 35% Pakistanis polled have a negative view of Lashkar-e-Taiba, a much lower percentage than for the other terror groups. One-in-four Pakistanis express a positive assessment, while 40% offer no opinion. LeT targets largely India, while others are now seen as possible threats to Pakistan itself. 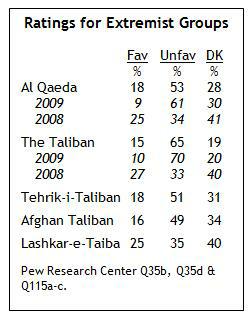 4. Also worrying are the extreme views of the urban poupulation -- or at least those polled -- about law, religion and society: 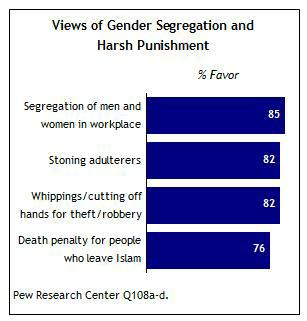