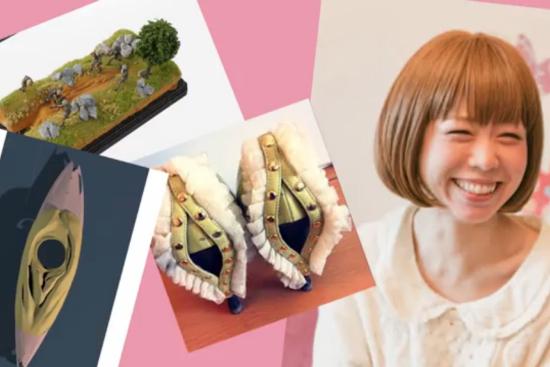 A 42-year-old cartoonist, Megumi Igarashi, aka Rokudenashiko or ‘good-for-nothing kid’,  on a self-proclaimed mission to “demystify” female genitalia, has been arrested under obscenity laws in Tokyo, Japan.

Her crime? Distributing  a digitized model of her vagina for 3D printing as part of a crowd-funding campaign to raise money for her latest work, a boat modelled on her genitalia, which her website describes as:

The Japanese police alleged that Igarashi collected around 1 million yen (approx Rs 5.01 Lakhs) in exchange for the scans, but Japanese media reports that Igarashi denies this and does not recognize the 3D scans as obscene.

She claims that she sent 30 people who supported her project the digital file as a thank you – an action that led to Igarashi being arrested by Tokyo police for breaking Japanese obscenity laws.

The provisions of the Japanese penal code that have been applied against her state:

A person who distributes, sells or displays in public an obscene document, drawing or other objects shall be punished by imprisonment with work for not more than 2 years, a fine of not more than 2,500,000 yen or a petty fine. The same shall apply to a person who possesses the same for the purpose of sale.

On her website Igarashi explains that she started "making this kind of art pieces" because she had not seen the female genitalia of others "and worried too much about [hers]". She says she did not know what female genitalia should look like at the same time I thought that hers was abnormal, as it is such a "taboo in the Japanese society."

"Penis, on the other hand, has been used in illustrations and signed as a part of pop culture."

Female genitalia, she says, "has been thought to be obscene because it’ been overly hidden although it is just a part of women’s body."

"I wanted to make it "more casual and pop".

Eve Ensler of Vagina Monologues would certainly approve. At one level, it is just a case of patriarchy triumphing yet again.

For the Japanese are no strangers to male genitalia in public celebrations, as the Shinto Kanamara Matsuri ("Festival of the Steel Phallus") is held each spring at the Kanayama Shrine (Kanayama-jinja) in Kawasaki.