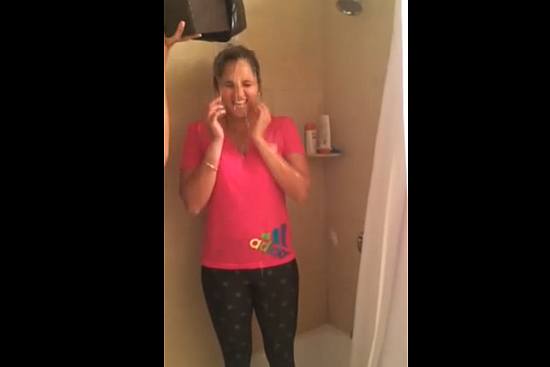 The trending Ice Bucket Challenge seems to have finally reached India with actress Hansika Motwani and ace tennis player Rohan Bopanna being two of the first in the country to pour a bucket of ice cold water on themselves.

Since June, several thousand people worldwide have recorded themselves getting drenched in ice cold water, then posted the stunt online and challenged others to do the same, or pledge USD 100 to ALS research.

Many have done both, in an effort has raise millions of dollars for the ALS Association, which combats amyotrophic lateral sclerosis, also known as Lou Gehrig's disease.

Sania Mirza had to take the challenge twice because of not having enough water in the first attempt.

Steven Spielberg, Justin Bieber and Bill Gates are among many international celebrities pouring buckets of ice water over their heads and donating to fight ALS.

Some 30,000 Americans have ALS, which attacks the nervous system and eventually leaves victims paralysed.

The phenomenon started with Pete Frates, a one-time athlete in Boston whose struggle with ALS turned the Ice Bucket Challenge into a viral fundraising sensation.

Politicians and sports figures went at it too, including New Jersey Governor Chris Christie and basketball superstar LeBron James.

Bare-chested English footballer David Beckham got in on the act, as did World Cup stars Neymar of Brazil and Argentina's Lionel Messi.

Microsoft founder Bill Gates, recorded himself taking icewater to the head, responding to a challenge by Facebook's Mark Zuckerberg.

Ethel Kennedy, the 86-year-old widow of senator Robert Kennedy, doused herself and challenged President Barack Obama to do the same. The world's most powerful man declined but promised a donation, according to the White House.

The charitable challenge's popularity has spread around the globe in recent days, particularly to Britain, Australia, New Zealand, Canada and Germany.

Facebook said that between June 1 and August 17 more than 28 million people mentioned the challenge on the social network, and 2.4 million videos were posted.

There have been no dearth of jokes on Twitter about the trending topic.

This #IceBucketChallenge may be new to the world.. But in India its very old.. Remember "Thande thande pani se nahana chahiye..gaana aaye.."

#IceBucketChallenge goras don't know the difference between balti and pateela. They should learn about the lota too.

Was up late last night watching the surreal coverage of Ferguson, Missouri. Scary. That entire city needs to take the #IceBucketChallenge

Amusingly, by popular consensus among the Twitterati, the following seems to have been declared the 'best ice bucket challenge'.