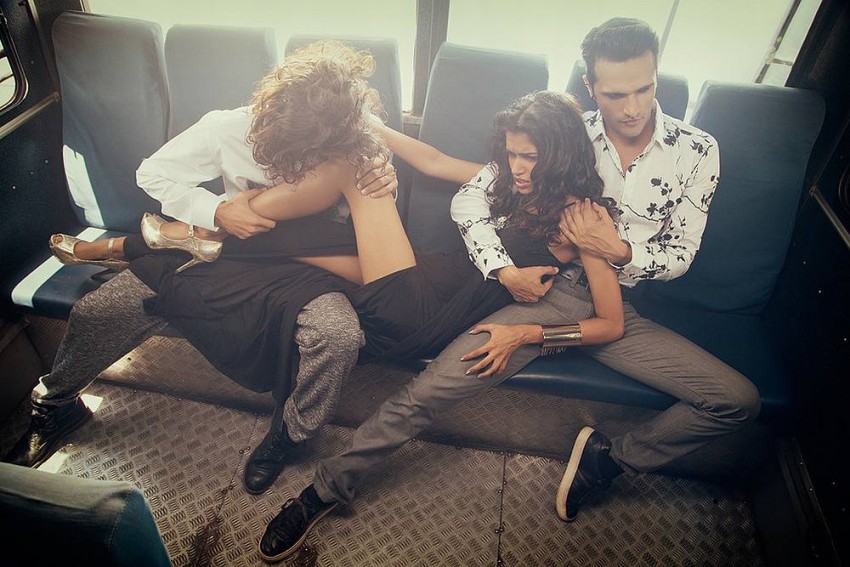 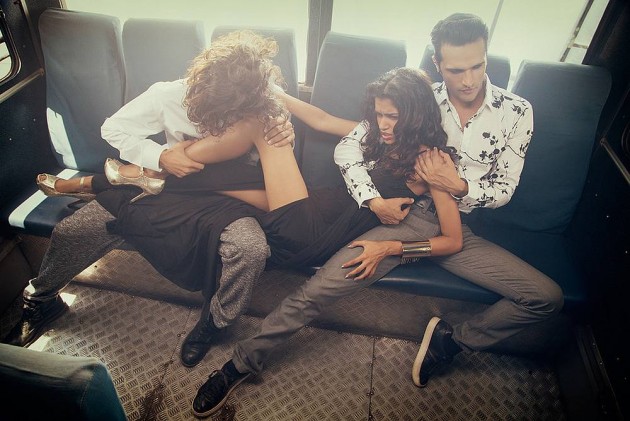 A Mumbai-based fashion photographer released a photo series 'The Wrong Turn' depicting a
fashionably dressed glamourous young woman, and two men, who are shown pushing away a third.

The photographs were published on Raj Shetye's Behance page on July 26 but have since been taken down: This is how it came to be.

To those who saw it, the series seemed not just to be at least loosely based on the December 16, 2012 incident in New Delhi when a paramedic student was brutally gang raped on a moving bus, an incident that shook the whole country, but also to be trivialising the serious subject.

So when news broke on social media today, the reaction on Twitter was overwhelmingly one of outrage:

No dearth of morons, a fashion photo shoot 'inspired' by the Nirbhaya gang rape.How seriously we take rape & human dignity in this country.

Also, whosoever came up with the Nirbhaya gang rape based fashion shoot , I hope they die a slow death.

Did i just see a fashion-spread depicting the Delhi gangrape of Nirbhaya? Disgusting!I hope all associated, die of shame! Insensitive swine!

How disgusting, a photo shoot "inspired" by the notorious Delhi gangrape. http://t.co/PUg8ObemAW. Page taken down since.

Are we now glamourizing rape by doing a photoshoot inspired by Nirbhaya? My stomach just churned. https://t.co/OdtgMPG4ZP

A Nirbhaya-inspired fashion shoot, themed: "Gangrape in a bus." CAN YOU BE MORE INSANE?? UNBELIEVABLE!!!!! https://t.co/jpfiD1sF2y

"It is not based on Nirbhaya," the photographer, Raj Shetye, insisted to Buzzfeed, referring to the fictitious name given to the Delhi braveheart.

“But being a part of society and being a photographer, that topic moves me from inside,” he continued. “I stay in a society where my mother, my girlfriend, my sister are out there and something like this can happen to them also.”

“Being a photographer, the only medium I can communicate in is photos. For me, its as simple as that. It’s art. Making movies, writing articles, making a poem — these are all ways of addressing the topic. Being a fashion photographer, this is what I can do best.”

“This is in no way meant to glamorize the act, which was very bad...It’s just a way of throwing light on it.”

In a telephonic interview to IBNLive, Shetye said,

"I wanted to throw light on Indian patriarchy and a male dominated society. I actually was using the photoshoot to highlight women's empowerment and lack of safety in India. It's not true that I used the Nirbhaya incident to create awareness. This is my depiction of the current situation using a medium I know and can communicate well in. Consider this. I did with photography what a writer would do if he had to write about that incident."

This is the official explanation by the photographer of the Nirbhaya shoot (Raj Shetye) as sent to a friend on FB. pic.twitter.com/qJveHT907K

But, of course, there was no explanation for why the series was tagged thus:

Despite this, Shetye managed to sound very righteous to Buzzfeed:

It was only when the outrage made other media channels chase him down that the photographs were finally taken down, and he told the CNN-IBN:

"I did not want to glorify the Nirbhaya incident, this isn't even about that incident. I am a responsible person. Why would I do something that is in bad taste?...I admit this has taken a wrong direction and we are now doing damage control."

Jitin Gulati who features in the photo series apologised on Twitter on behalf of Shetye:

(1/3) This test shoot was done by Mr. Raj Shetge and the brief and intention was not even remotely to glorify an intolerable act like 'rape'

(2/3) I have removed these pictures from all public platform and the photographer has done the same. I sincerely apologise if this has..

In the end, as a Twitter user succinctly summed it up:

If until yesterday you hadn't heard of Raj Shetye but you know of him today, the object of his Nirbhaya photoshoot has been fulfilled.