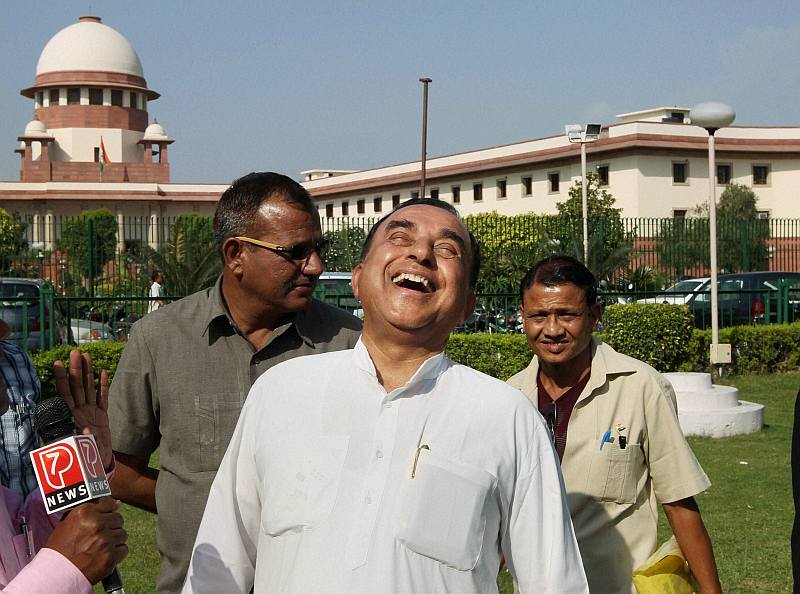 Yesterday, Dr Subramanian Swamy announced the merger of his Janata Party with the Bharatiya Janta Party ahead of the 2014 general elections.

This is what he had to say about the party in 2000 in a signed article in the Frontline: The RSS Gameplan,  which ran with the introduction: A disillusioned and dispirited RSS has set the ball rolling for mid-term general elections in which it hopes that the BJP will gain an absolute majority and implement the Hindutva agenda, and concluded with:

The RSS game plan also has proposals to bridle the electoral system. Adult suffrage is out, but furthermore, the electoral college for the Lok Sabha will not vote for candidates, but for parties under a List System. Electronic Voting Machines (EVMs) will be used in all the constituencies. Perhaps it is then easier to rig the outcome. After all, in the 1999 general elections, the BJP and its allies won 34 out of the 45 Lok Sabha constituencies which had EVMs. On that ratio, the NDA should have won 405 se ats of the 544 Lok Sabha constituencies and not 292. EVMs have to be programmed by an engineer to tabulate the votes in its memory. It can easily be programmed to transfer votes of one candidate to another, or one party to another. The EVMs are entirely unsafeguarded today. I suspect it was rigged in the 1999 general elections.

The RSS game plan is thus ready. Only the D-Day for the blitzkrieg is to be determined. Since it appears that the RSS has already been generating momentum on religious fundamentalist issues (for example, Gujarat's Ram temple) and raised the fanatical emo tional temperature (chasing of Christian missionaries), my guess is that this campaign will be taken to a fever pitch by November 9, 2001 (the 1986 date for shilanyas) and then mid-term elections will be called.

Prime Minister Vajpayee will as usual waffle and wobble, but he will not resist. That is his nature; he is a mask for the RSS, as Commissar Govindacharya had once said.

Of course, the good news is that the game plan can fail. I live on the hope that in India, no well-laid plan ever works. India, after all, is a functioning anarchy. That has been the undoing of every attempt to straitjacket its society. That is why we ar e still the longest continuing unbroken civilisation of over 10,000 years. The RSS is, luckily, our counter-culture. The vibrations of Mother India will, I hope, be its undoing.

This was of course after he had engineered the fall of the Vajpayee government in 1999: "It Was A Gigantic Managerial Exercise"