The Real Tragedy Of Adarsh 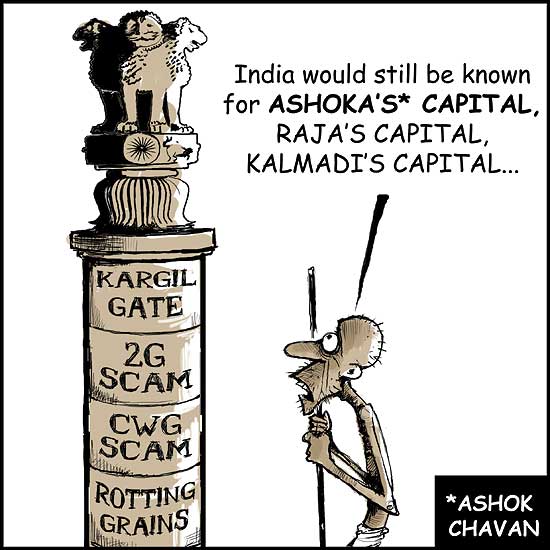 The real tragedy in the Adarsh Housing Society scam in Mumbai is not that land earmarked for a six-storey building of apartments for disabled veterans, war widows and heroes of Kargil was used, in contravention of zoning laws and environmental regulations, for a 31-storey luxury high-rise, out of whose 103 apartments, only three went to families connected to the Kargil conflict, and the remainder went to two retired army chiefs, a former naval chief, four other army officers who went on to become generals, relatives of ministers and top netas and babus.

The real tragedy is not that it involves top officers of the defence establishment who got  themselves flats allotted in a building made on land purportedly sanctioned in the name of Kargil widows and heroes.

The real tragedy is not that the 31-storeyed building could provide a potential threat a vantage point over the navy’s air station, INS Shikra, just a kilometre away aerially.

The real tragedy is not that the Chief Minister of Maharashtra, after first brazening it out about his 'distant relatives' — his mother in law, among others — and then offering to return the flats and resign, continues to hold on to his post like a limpet.

The real tragedy is not that the silence of the Prime Minister and the Congress President is deafeningly loud and that their fabled 'voice of conscience' is muted or that they are hiding behind the shield of 'due process' in sacking the incumbent CM of Maharashtra, whose involvement in other bigger scams has since come to light.

The real tragedy is not that sycophancy ruled, or that Suresh Kalmadi, accused in the CWG scam, and Maharashtra Chief Minister Ashok Chavan were among those present, at the AICC meet today where not a word was uttered about any of these scams, while the big honchos held forth on everything else under the sun, from RSS involvement in terror plots to the situation in J&K  or that A. Raja, accused in the spectrum scam, continues to be a minister in UPA.

The real tragedy for the ruling government is not just that the various "people in opposition" said to be involved in the Adarsh scam are now with the Congress (Narayan Rane) or UPA (T.R. Baalu).  The last elections when Congress bank-rolled the MNS to win, along with NCP, had removed all the vestiges and veneer of respectibility from the so-called 'secular' front and was more a commentary on the state of the decrepit 'communal' opposition -- at the state and at the centre.

The real tragedy is that after so many days, of scandalous after scandalous details hitting the headlines, nobody believes that the guilty would ever be brought to book or be meted out any justice — or even that there could be an independent enquiry to bring out the truth.

Which police officer indeed would lodge an FIR against the CM of Maharashtra?  Or powerful ministers and well-connected babus and officers?

Indeed, given the political rigor mortis in the present UPA, there seems to be no effective systemic response available. Though CBI is said to be investigating the case, nobody quite knows what it is investigating and nobody frankly has any expectations from its "investigations".

The Congress says its top ministers are investigating the matter. It would be laughable if it weren't so tragic. It is not a matter involving the Congress party's personal property that its trouble shooters — Pranab Mukherjee and St Antony — will do the 'investigation' and then solve it all by simply issuing a firmaan naming who should replace Sri Chavan once Sri Obama has been received and shown around Mumbai.

It is possible, though by no means certain, that the more disciplined defence establishment might actually end up taking some action after a court of inquiry, but what about the civilians — netas and babus and assorted fixers?

It is a clear case requiring criminal prosecution but as Arvind Kejriwal points out in today's TOI, in the context of the CWG,  the anti-corruption laws and systems suffer from internal contradictions — the CVC is independent but merely an advisory body, with no jurisdiction over politicians, lacking any powers to take action. And the CBI, which has the power to take action, as stated earlier, is seen to be the government's handmaiden and carries no credibility: Kejriwal goes on to say:

The government has announced the setting up of yet another agency called the Lokpal by December. Again, the government is playing dirty. According to its proposal, the Lokpal would have jurisdiction over politicians but not bureaucrats, as if the two indulge in corruption separately. So, almost every case will be investigated by both the CVC and the Lokpal; the former will look into the role of bureaucrats and the latter will look into the role of politicians. The obvious question is, why can't the same agency investigate both? And the most interesting part is that even the Lokpal is being made an advisory body. It would merely recommend to the government to initiate prosecution against, say, some of its ministers. Is it likely the government would ever do that?

It is time that the media focussed on the critical issues afflicting our anti-corruption systems. Let the media say that unless these deficiencies are addressed, no agency is capable of doing an honest and effective investigation. All of them should be merged into one single agency, the Lokpal. Give it jurisdiction over both bureaucrats and politicians. Give it comprehensive powers to investigate and prosecute the guilty without needing any permission. [Read the full piece at the TOI]

Also Read: an earlier article in Outlook by Arvind Kejriwal

Does any of this even seem feasible? Never mind the war of words between the two political parties, what do you think should be done in this case? Even if all the illegal allotments are cancelled and the building, as has been variously suggested, is razed or sold or converted into a trust for the war widows and heroes, do you think any of those behind the scam would receive any punishment? Should they not? What do you suggest?