'The Mother Of All Sweetheart Deals' 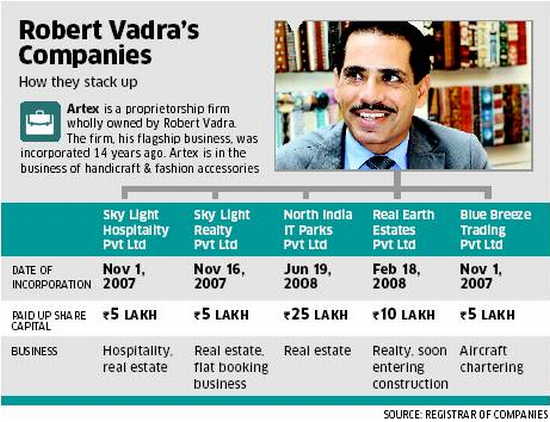 DLF has given loans to Vadra 's companies

DLF has also extended loans to various companies owned by Vadra. Some of these are unsecured loans or debt without any collateral. As on March 2009, Sky Light Hospitality had received unsecured loans amounting to Rs 25 crore from DLF Ltd. As on March 2010, only Rs 10 crore remained. It 's unclear from the statement of accounts if the rest was paid back or written off. Sky Light Hospitality has, in turn, loaned money to other Vadraowned companies such as Blue Breeze Trading Pvt Ltd, North India IT Parks Pvt Ltd, Real Earth Estates Pvt Ltd and Sky Light Realty Pvt Ltd.

Blue Breeze Trading, a company incorporated in 2007 with Vadra and his wife Priyanka Gandhi Vadra as first directors and equal shareholders, is in the business of chartering aircraft. The company, however, seems to have done little business, apart from acquiring agricultural land. Priyanka Gandhi ceased to be a director as on July 2008. She is no longer a shareholder. Real Earth Estates Pvt Ltd also had a Rs 5 crore loan directly from DLF on its books as on March 2010.

The joint venture firm Saket Courtyard Hospitality had received Rs 3.58 crore of unsecured loans from DLF Hotel Holdings Ltd, the group company that owned 50% stake in the JV. "The business relationship of DLF Group with Robert Vadra has been in his capacity as an individual entrepreneur and on a completely transparent and armslength basis.

The story was summed up by Mr Swapan Dasgupta, a journalist known to be close to the BJP, on Twitter as:

On March 16, the TOI reported: BJP, Left to corner Cong on Vadra's rise:

On Tuesday, leader of opposition in Lok Sabha Sushma Swaraj said, "The matter is a serious one and the party is gathering documents to aise it with the prominence it deserves."

She said the party had "entrusted" leader of opposition in Rajya Sabha Arun Jaitley to collect facts on Vadra's rise.

CPM leader Sitaram Yechury was on the same track. "It looks like a serious matter and our party is ascertaining facts and will come up with a structured reaction on this," he said.

But the story began to change, as Mr Dasgupta tweeted on March 16:

Resistance in BJP on raising Vadra issue is from some a of its ex-Presidents
Wednesday, March 16, 2011 2:57:47 PM via Mobile Web

which led to the following exchange:

@swapan55 is it the person who has held the maximum terms as bjp president
5:12 PM Mar 16th via Twitter for BlackBerry® in reply to swapan55

On March 17, the TOI reported:

Differences were evident at a meeting of BJP leaders in Parliament on Wednesday with some leaders advocating caution while some others felt Congress could be asked some questions on Vadra's activities. Leader of Opposition in the Lok Saba Sushma Swaraj felt it would not be good form to target family members of political rivals.

Whether or not the possible counter-attack on the BJP's own son-in-law, Mr Ranjan Bhattacharya, whose name keeps cropping up in Radia tapes and in Wikileaks cables, is one of the reasons for the BJP's hesitation, has not found a mention in any of the discussions so far.

Since then, of course, the focus has shifted to the cash for vote wikileaks expose, but Mr Dasgupta has persisted in following the story on Twitter:

Notice how many of those who helped the UPA win the confidence vote & also helped Vadra's business secured Padma awards? Not incl. media
about 19 hours ago via web

Re: WikiLeak, don't forget role of internal saboteurs in BJP. Some of this later confirmed in Radia tapes. One trojan horse got Padma too
about 17 hours ago via web

The controversy over Sant Singh Chatwal was public enough but perhaps Mr Dasgupta was alluding to Dr. Kushal Pal Singh, the chairman and CEO of DLF, getting a Padma Bhushan for 2009 and the prominent name in this list in his last tweet?