The Long Arm Of The Law 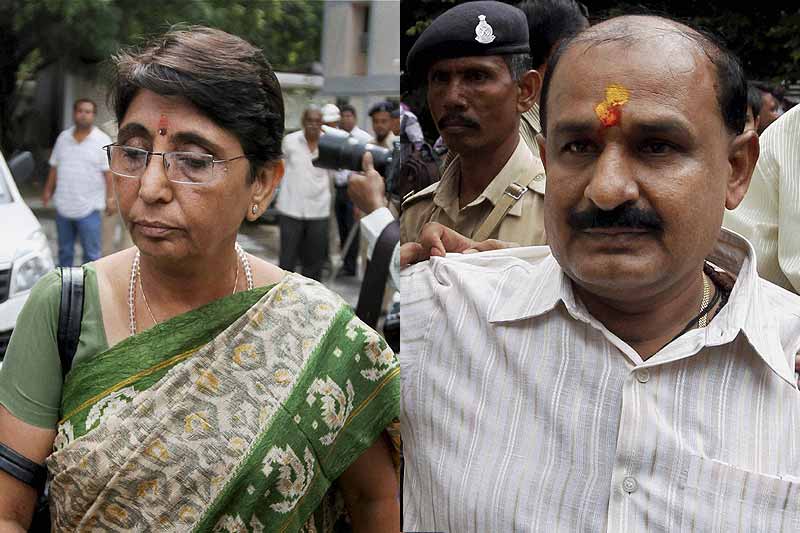 The most bizarre "defence" of the heartening, if belated, Naroda Patiya verdict was that Maya Kodnani was not a minister during 2002 when the "riots" occurred, as noted yesterday:

Weird defence. Surely it is worse that such a person was made a minister - did they not know of charges against her? bit.ly/OwM0JF

Dismissing demand for Chief Minister Narendra Modi's resignation following the verdict in Naroda Patiya case of 2002 riots, Gujarat government today distanced itself from convicted BJP MLA Dr Maya Kodnani saying she was not a minister when the incident occurred.

"Let me be very clear that the MLA is not a state government functionary as you are trying to make it out, secondly, Dr Maya Kodnani was not a minister when this incident took place," government spokesperson Jaynarayan Vyas said while lashing out the Opposition for tageting Modi.

"They have a different yardstick for BJP, for Mr Modi there is another yardstick, and for Gujarat it is yet another one...They have their eyes on the Assembly polls," he said.

Vyas said Kodnani "is a party functionary, she is a sitting party MLA, no denying that, but that cannot be linked as you are trying to make it out", adding that the moment she was summoned for interrogation she ceased to be a minister.

As the Hindu points out:

Needless to say, the conviction is a huge setback to the Gujarat Chief Minister personally. The fact that Ms Kodnani led the Naroda killings was common knowledge, yet Mr. Modi made her a minister, even putting her in charge of ‘women and child development’ as if to thumb his nose at the victims. A bigger worry for Mr. Modi ought to be the establishment of conspiracy. The Chief Minister has maintained all along that the “riots” were a spontaneous act by crowds enraged by Godhra. It stretches credulity that Ms Kodnani could enter into a conspiracy with her co-accused without the government getting a whiff of the group’s criminal intentions and conduct, before, during and after the killing.

The paper goes on to say:

The conviction by a Gujarat court of BJP legislator Maya Kodnani and Bajrang Dal leader Babu Bajrangi along with 30 others for their role in the Naroda Patia massacre is the strongest judicial affirmation yet that large-scale communal violence is almost always a product of pre-meditated political planning and calculation... The verdict is a landmark one. It is for the first time that an Indian court has convicted a sitting MLA — Ms Kodnani was also a minister in the Narendra Modi government from 2007 to 2009 — for mob aggression against members of a religious community. Secondly, the court has not only upheld the charge of criminal conspiracy against the 32 individuals convicted, it has also found one of them guilty of rape and sexual harassment.   Read on at the Hindu: A stunning verdict

The convictions in the Naroda Patiya case are, more than those in others, a setback for chief minister Narendra Modi and for the BJP. The convicted  former minister, Maya Kodnani, is a trusted lieutenant of  Modi. She was taken in the ministry even when she was facing serious charge of a direct role in the massacre. The conviction of the former minister and the Bajrang Dal leader shows how involved was the state’s political establishment in the conspiracy and killings. Modi still denies any responsibility for the killings but the last legal word on it is yet to be pronounced. The Naroda Patiya convictions show it may not be too far.

The conviction of Ms Kodnani raises the possibility of the transference of a former minister of the Modi government (now an MLA) from her place under the lens to the gallows, or at the very least to a jail cell for life. This particular individual was wont to issue vile statements that seemed self-congratulatory. She was no different in this from leading figures of hate groups like the Bajrang Dal, one of whose leaders has also been convicted, besides 30 others...

It is noteworthy that Ms Kodnani and the others have been convicted of murder as well as criminal conspiracy. Since the latter has been legally established in this case, an opening has appeared for the first time that brings up the prospect of senior figures in the ruling establishment in Gujarat being similarly exposed.

Those convicted naturally have the right to appeal. Should they exercise it, the judiciary ought to hear the case on a speedy basis. So much time has already been wasted in this case and other post-Godhra trials which have brought shame to the country. The terrible Naroda Patiya episode occurred on February 28, 2002. The crime branch in Ahmedabad moved in a lackadaisical manner that was typical of the response of the state government to violent crimes against Muslims. A sense of purpose came to be detected only after the Supreme Court set up a special investigation team, and the trial could begin only in 2009.

After complimenting the judicial process, and noting that this is a moment to admire the judicial system that has wrested some resolution for the trauma of Naroda Patiya, the Indian Express goes on to point out:

And yet, it must be asked why justice and reparation are still missing for another scar in recent history — the 1984 riots in Delhi, in which Sikhs bore the brunt of the violence as retaliation for Indira Gandhi’s assassination, under the watch of the Congress government.... While the 1984 riots and the 2002 riots have become rhetorical tit-for-tats between political forces, the fact remains that one is inching towards answers and the other has been treated as a matter best forgotten and transcended. What, also, of the Nellie massacre, which is not even invoked as a political talking point? In 1983, Muslim settlers were killed and injured in an ethnic clash during the Assam agitation — the All Assam Students Union and other activists had whipped up sentiment against “foreign nationals”. But the investigation reached nowhere, legal proceedings were soon dropped, not a single person has faced trial.

Read on at: Where law wins out

Also, yesterday, on CNN-IBN a useful discussion on the above and the collusion of the administration, contrasting the role of the Congress for 1984 anti-Sikh carnage, which had also gone on to promote some of the accused as ministers — one of whom remains in the central cabinet even today — in the aftermath: