The Kedarnath Shrine, Circa 1882 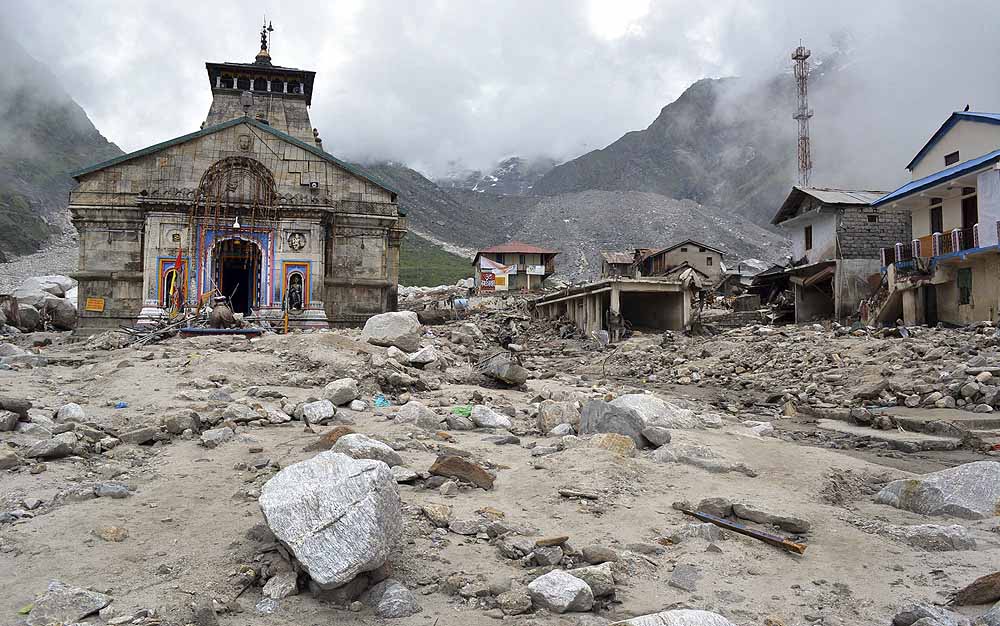 The news from Kedarnath has been heartbreaking, but the shrine is miraculously safe despite being "hit by boulders as big as cars"

As is the norm with such shrines, the exact history is shrouded in mythology. This is what the official badarikedar.org website says:

According to legend, the Pandavas after having won over the Kauravas in the Kurukshetra war, felt guilty of having killed their own Kith and Kin and sought the blessings of Lord Shiva for redemption. He eluded them repeatedly and while fleeing took refuge at Kedarnath in the form of a bull.

On being followed he dived into the ground, leaving his hump on the surface. The remaining portions of Lord Shiva appeared at four other places and are worshipped there as his manifestations.

The arms appeared at Tungnath, the face at Rudranath, the belly at Madmaheshwar and his locks (hair) with head at Kalpeshwar. Kedarnath and the four above mentioned shrines are treated as Panch Kedar.

An imposing sight, standing in the middle of a wide plateau surrounded by lofty snow covered peaks. The present temple, built in 8th century A.D. by Adi Shankaracharya, stands adjacent to the site of an earlier temple built by the Pandavas. The inner walls of the assembly hall are decorated with figures of various deities and scenes from mythology. Outside the temple door a large statue of the Nandi Bull stands as guard.

The Geological Survey of India (GSI) has some fascinating photos from the 19th Century:

As a part of the ongoing collaborative project between GSI and University of Colorado, USA, Prof. Roger Bilham studied the GSI archives during his visit to GSI, Kolkata in June 2009. GSI acknowledges Prof. Bilham for compiling this content from the GSI archive.

The photographs are attributed to Carl Griesbach and the captions below use the spellings in the captions on the GSI site:

Peaks and temple of Kedernath 1882.